You are here: Home / Personal / topics / stories / always crashing in the same car

I don’t know how else to start this story, so I’ll just say it.

I crashed our car.

Yes, you read that correctly. Don’t worry – there were no casualties. I’m here. The house is no worse for the wear. And the car… well, the car lived to tell the tale. 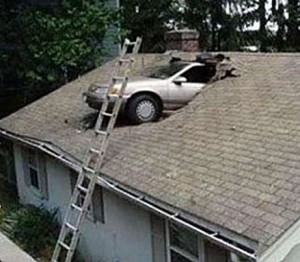 It was not quite this bad.

Before you start to make a number of assumption about me and my driving, allow me to point out that I have not so much as nudged another vehicle in my first year behind the wheel. On the road I am a cautious, defensive driver.

It’s off the road where I’m a danger. Particularly, in my driveway. I just don’t have the spacial relations skills to navigate the tiny space. Our car earned its first, tiny, quarter-sized ding in a tango with our garage doorframe last year. It’s just scant inches wider than our car.

This time I made it past the garage, but realized far too late I was still angled towards our house. In my defense, the house actually starts being houselike within the bounds of the frame of the garage door. You have to cut hard right to avoid backing straight into the house.

(If getting out of our driveway is starting to sound like a difficult geometry problem or a question on a Mensa test, you are starting to catch on.)

Angled towards the house does not equal crashing into the house. You see, I actually had not yet crashed. I stopped the car and got our to investigate my predicament. I had barely kissed the side of the house with the back fender of the car. I could reverse course and drive back into the garage and pull out again.

I returned to the car. I put it in drive and gingerly nudged it forward only to hear a terrifying metallic shrieking noise. Creeeeawwww-oy-eeeeeeeeee. I threw the car into park and leapt out to discover that the tiny, tangential kiss I had delivered to the house resulted in our stucco gripping the edge of my fender, and now it refused to let go – to the tune of pulling half of the fender off the car!

I’ll admit it: I panicked. How the hell was I going to get out of this? My crisis logic said, back up a little bit so there is less tension on the fender, and then pry it loose from the wall. And, well, since that was the smartest message running through my brain, I did it.

The problem was that I did it with a little too much verve. I put the car in reverse and tapped the gas slightly too hard, resulting in me colliding with the house at full ramming speed. In addition to my crumpled fender, I now had a shattered taillight, and had bent the spigot on the side of our house in half.

I meekly pulled the car forward a hair and got out to investigate the damage. The spigot was twisted back on itself like a pretzel. I applied slight pressure to try to return it to its former shape and it snapped off in my hands, spraying me with a blast of water.

Suffice to say, this was not one of the finer days in my personal history. To my credit, I had the spigot replaced and a taillight ordered by the time E returned home, which left only the bruises to the rear of the car and my pride as evidence of the mishap.

I don’t understand why the beginning of summer has officially became car calamity season, but I’m happy that last year’s exploits taught me to budget for the worst possible levy of my own personal stupidity tax against my bank account.