I know exactly three hockey players by name, and two of them are Flyers. The other, of course, is Wayne Gretzky, who famously said, “You miss 100% of the shots you don’t take.”

(Actually, maybe it was his dad who said it to him? In any event, I enjoy this version: “I learned that 100 percent of the shots you don’t take don’t go in the net.”) 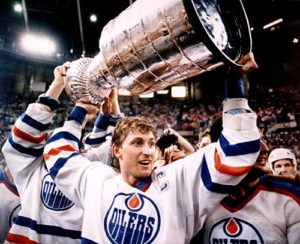 This might be the first time the visage of a sports star has graced the front page of CK. Bask while you can, sports fans.

This is one of those maxims that is so crazy obvious that we tend to lose the meaning. Like, duh, if you don’t try it, it will never get done. All of the shirts I never folded will stay unfolded until I fold them.

Except, I think it deserves a little more nuanced than that. It’s not just about taking every possible shot – like, asking every girl out until one says yes. It’s about maximizing your shots … which, in that unfortunate example, means going somewhere where there are a lot more girls.

(Or, maybe asking some of the boys out, too.)

This makes me think about how I play video games. I am a super-defensive player. This can be traced back to my great love of playing Chun Li in Streetfighter through ceaseless hours of turtling in strategy games like and Warcraft. I like avoiding attacks as I chip away at a player’s defense until I am big and bold enough to crush them decisively.

I take plenty of shots, as long as I stay safe while I”m doing it.

It should not come as a shock that I am awesome at playing these games against the computer opponent (hello: only child), but I am not so great at playing against other human beings. The computer isn’t terribly innovative, so my long game tends to work fine in keeping my undefeated, even at the highest difficulty. But, introduce one PVP game of Starcraft into my mix and all of my careful planning goes out the window. I get shredded. Or Zerg rushed. Whatever.

I’m taking every shot I can in my normal play style, so I’m doing Mr. Gretzky proud… right?

No. My play style isn’t meant to maximize wins – it’s meant to minimize damage. It features way less shots. That would be fine if I was a member of a team, but when we’re on our own we’re all playing the same position as Gretzky – center. I can’t afford to just play goalie, praying for shut-out.

The only way to take more shots is to change my entire approach to the game.

Hockey and video games might not be my calling, but when it comes to songwriting, me and Mr. Gretzy see eye-to-eye. It write it ALL down. I take every shot, even if it’s just a single line I’m jotting down, because I’ve seen too many bad one-liners turn into amazing songs to ignore them anymore. I know every song counts, so I stopped being such a perfectionist about it.

I’m a perfectionist in many things, and perfectionists take way less shots. Maybe they never get blocked or intercepted or misunderstood or finish second. Maybe every song is a hit. But, if you write down only the hits, you’ll be missing so many melodies, until you’re not writing down anything at all.

I do not want a life full of empty nets and blank pages.

I am going to take more shots. Defense be damned.