When I started my musical journey half a lifetime ago if you had asked me if I would ever play “Eldery Woman Standing Behind the Counter in a Small Town” to a packed bar at a post-Christmas party in DelCo, my answer would have been, “Hell no.”

I mean, there are few things I enjoy less in life than 90s Pearl Jam, the fickle music tastes of bar crowds, and Christmas. Also, half a lifetime ago I was straightedge. (I’ve always thought Delaware County is pretty decent, though.)

Yet, half-my-age Peter would have been entirely incorrect in his judgmental utterance, because that is just what I found myself doing on the day after Christmas as Ashley and I played our first legit headline appearance as Smash Fantastic.

And you know what? I liked it. 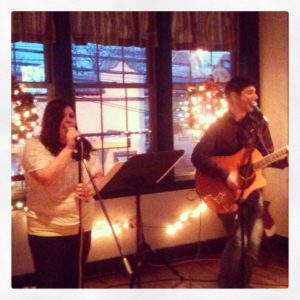 Smash Fantastic mid-song, as shot by Tara B.

All last year Ashley and worked on our repertoire of cover songs as our non-work project together (the teamwork of which made us an even more killer pairing in the office). What started out as a sparse 30 minute set in June has now blossomed into more than three-hours of a mega-pop acoustic jam in which you will quite certainly recognize nearly every song.

This presented a dilemma. Ashley is a Clarkson-level trooper when it comes to wailing through the tricky vocals in our set, but not even The Original Idol herself can rock for that long uninterrupted without getting a little hoarse. Thus, when we scored our DelCo bar gig, it was left to me to quickly add some solo covers to our repertoire to give Ashley an occasional mid-set breather.

Except, Ashley is singing my solo cover repertoire – all Madonna and rocker chicks! She’s doing my “Like a Prayer,” my “Bad Romance,” my “Since U Been Gone” … we even mashed up my formerly solo “Man in the Mirror” into a righteous duet in the original key.

That meant I had to learn to sing songs original performed BY OTHER BOYS. Ugh. Even worse, they couldn’t be a bunch of obscure Rufus Wainwright and Elliott Smith, because the whole point would be to keep the bar crowd interested while Ashley caught her breath.

Thus the Pearl Jam. Everyone knows it and, despite my enduring disdain for Mr. Vedder’s vocals, I can match him pretty effortlessly right down to the warble.

(Not as good as Wes does, though. I really need to record that for posterity at some point.)

After an opening salvo from Ashley, “Elderly Woman” was the first song I played solo. As I started the circular 5-4-1-4-1 chord progression I took a moment to reflect. This is the first time you are ever in a bar playing a song they want to hear, I mused. And they did. I think. It wasn’t the biggest crowd-pleaser of the day (which was surely “We Are Young” or “You & I / What’s Up,” and maybe my “Forget You”), but people nodded in recognition and kept on drinking.

No fleeing the room. No snide, very-audible remarks about my bad singing or theoretical sexual orientation. None of the stuff that I always hate about bar gigs.

At the end of three hours we closed with a killer “Like a Prayer” and encored with “Behind These Hazel Eyes” and a roaring “Rolling in the Deep” and I pronounced with great certainty that we had just played one of my favorite gigs of all time – yes, complete with Christmas and bar and Pearl Jam and all of it. It was 100% fun and 0% stress, and I got to hear three hours of music I love … it just so happened that I was also playing it with one of my friends.

In a weird and slightly twisted way, “Elderly Woman” was the highlight. I might write my own music and prefer to cover Gaga to any guy out there, but when it comes down to it I now have the performance chops and the confidence to hold down the mic on just about anything – whether I actually like the song or not.

As for our repertoire, next up from my most-loathed list is a little number by Jason Mraz.