This is my last week working at Independence Blue Cross – also known as IBX. I have been an IBX associate since March of 2003.

It still doesn’t seem real to see those words written down – not just because they represent the end of a ten-year chapter of my life, but because during that decade the name of my employer has never appeared here on CK (aside from perhaps an archived tweet or two).

No one ever told me not to mention IBX. I had blogged openly about all of my previous jobs and colleagues, and even blogged a bit about my introduction to corporate culture at IBX. I don’t think Google Alerts existed when I first interviewed, or if they did they were not very prevalent.

Yet, as I sat in the interview for my initial cooperative education experience in Provider Communications back in 2003 talking about how I was trying to triangulate my way to the perfect job for me, I must have decided that it was for the best to keep mum about it.

I never thought I would enjoy a corporate job, but my initial co-op position as a Communications Assistant proved that wrong. I loved working with the nuances of words and communicating the position of a brand. 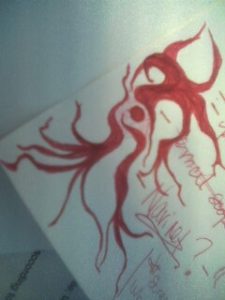 A hydra devours my meeting notes in 2004. I barely recognized my handwriting!

(From here on out this is a sort of narrative resume; some of you may be inclined to skip to the maudlin part next to the North-facing skyline, below.)

My co-op job gave me the chance to plan and launch a four-color publication all on my own, all while wrangling the edits to a massive Provider Manual and helping a team of writers keep their projects organized. I loved it! All of my many OCD tendencies finally had a professional outlet that was all about communication!

That lead to my first freelance gig, returning as an Editorial Assistant, where I used my ‘net-knowledge for the first time to launch a departmental intranet archive that still exists today.

My job as a Communications Specialist in 2004 was my first full-time work after college. The first year I worked on enacting a major class action lawsuit, which yielded so many late nights that the time is a blur – but it also allowed me to interact with Executives and understand their communications preferences.

In 2005 I made a lateral move to become a Project Coordinator, where I got back to working with words. I managed the communications for IBX’s award-winning disease management program and launched the company’s National Provider Identifier campaign to providers. 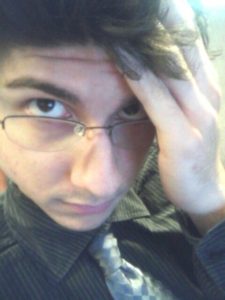 Editing at my desk.

In summer 2006 a position opened in Creative Services. I didn’t entirely understand what they did there, but I knew for sure I didn’t want to get away from working with words! After much discussion and encouragement from my peers I interviewed for the job Creative Services and learned it was actually our own full-service ad agency – complete with a recording studio! – tucked away on the 38th floor.

I was promoted to Communications Account Representative and was suddenly thrust into a new world where words were supported with graphic design, where we were speaking on behalf of the entire company with every communication, and where I had clients who preferred to hear “yes” rather than executives who had to say “no.”

There was an endless amount of opportunity in Creative Services, which was evident from my first interview. I took over our glossy employee magazine, Independence INK, along with all of the rest of our employee communications. I defined our departmental processes, including scripting our first Creative Brief. I transformed the way we approached non-profit work like CHIP and our United Way drive, with huge results for both – including IBX’s first of two back-to-back million-dollar United Way campaigns.

But the biggest of all big projects in Big Blue’s Creative Services department was the Blue Cross Broad Street Run … and it was all mine. It was our largest corporate sponsored event, but also our most amorphous project. It was my job to collect all of the ads, brochures, t-shirts, and even socks into a cohesive narrative about our brand – and to forge a relationship with The Philadelphia Department of Recreation while I figured it all out.

The BCBSR is without a doubt one of the most rewarding projects of my career to date. I helped the race double in size while maintaining an unfathomably high satisfaction rating from its passionate base of runners, and every year we added new features that made the story of the race more compelling (and fun!). 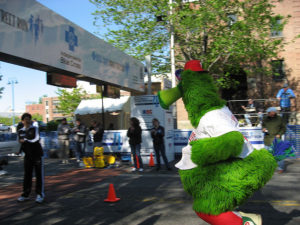 That amorphous clump of deliverables turned into a highly organized sequence of over 60 individual projects, and my initial team-up with our talented designer, Chris, and director of corporate relations, Kathy, turned into managing a team of almost a dozen contributors.

The BCBSR is now the largest 10-mile run in the county, on its third sold out year, and one of the largest events in Philadelphia! I am so gratified that I was able to be a part of that transformation. It continues to humble me to see the dedication of runners to the event, as well as their compassion for each other.

My work on the run was a big reason for my promotion to become a senior member of the team in 2008, but it was far from my only project – I usually carried over forty at a time, in addition to BCBSR! In 2009, I redesigned our maternity program materials from the ground up, expanding our package while saving 23% in costs.

After that, I asked to take on a major challenge: managing our Marketing projects, with a focus on launching new products for Individual and Small Business. Along the way, I learned from my manager, Christine, that Account Management was about the work as much as it was the people. Suddenly I was taking clients out to lunch and bringing them to concerts! For the first time, my relationship management was equally important as my project management. 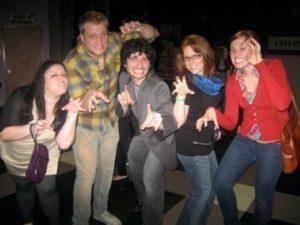 At Lady Gaga with my Marketing Clients and Britt in 2009.

In 2009 I was also finally in the position to be asking questions about IBX’s approach to Social Media – or, more accurately, in the position for my questions to be heard. Unfortunately, the answer at the time was, “We don’t have one.”

My Director, Shawn, had a different answer. He assembled a small team – including me and the now-infamous Britt – to define how IBX could best join the conversation in social media. Shawn boldly directed our work, helped us uncover best practices, and sold our strategy to everyone in our company up through the CEO so that we could establish a foothold in social media.

I am so proud that my initial questions and subsequent research helped grow us into a brand with a robust and consistent Social Media identity and responsive social-based customer service. It’s my dream come true.

In 2011 I was promoted to a position made just for me – Client Services Lead. With it came responsibility to help set the strategy for not just one campaign, but our entire brand. I took over communications our Sales division, which changed my focus to our biggest customers and most intricate problems. I also had the chance to pitch and implement our 2012-13 Social Media strategy, and to assist in undertaking a company-wide rebranding!

Deciding to leave Creative Services at IBX has been the most difficult decision of my life. There are as many projects waiting to be tackled here now as when I arrived in 2006. While I’m sad to leave them behind, I know they remain in highly capable hands.

As I say goodbye to IBX, I have so many people to thank for my continued development and success – colleagues and clients alike, past and present: 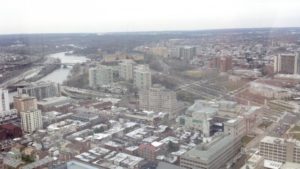 The North-facing view from my desk on the 38th floor.

Every one of those people changed my life, and in the process we changed millions of lives in the communities we serve – helping people manage chronic conditions, covering kids without insurance, and inspiring people to take healthy steps for themselves.

It has been my honor and privilege to work alongside so many committed, creative professionals for the past decade. I might have the same career aspirations without them, but surely not the same career potential or trajectory, nor the same personal accountability. True to my word in that first interview, IBX really did help me triangulate to what I wanted from my career – and now I’m going after it!

The IBX building is an anchor of Philly’s unmistakable skyline, which means everyone in the city sees it almost every day. Sometimes after a long day or week of work, the last thing you want to see on the horizon is your office staring back at you, but I never really minded. Whenever I spotted it in the distance or drive by, I would just always say to myself, “there’s Big Blue,” and smile.

I love you, Big Blue.