You are here: Home / Personal / off-topics / family / the one where the baby potty-trains herself 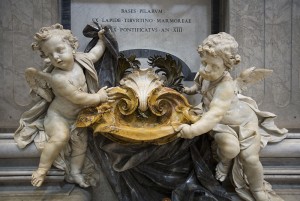 Hark, it is another post about baby waste, as they foretold! Our baby is at least this chubby. Detail of the Cherubs Fountain at St Peter’s Basilica or Basilica di San Pietro, Rome, Italy.

Of all of the challenges that fatherhood held in store for me, I felt the most trepidation about diapers. Luckily, my high-quality baby sensed my weakness in this area and toilet-trained herself to make my life easier.

Maybe I should start at the beginning.

Sure, no one takes a special delight in dealing with human waste (well, certain fetishists excluded), but I just don’t have the coping mechanisms in place for even the briefest of ordeals. Urine, at least, is typically sterile when it’s straight from the tap. The idea that poop might touch some part of my person was enough to cause an anxiety attack even before her birth. I don’t even do well with cleaning a toilet with a very long-handled and disposable brush.

Luckily, baby diapers are really not so hard to manage once you graduate from the initial “explosive bowel movements can happen at any time” phase. After a month or so of finding my footing with disposables so that I could whip them off and quickly … well, dispose of them … we graduated to cloth diapers. It took me a little while to come to peace with them using the same washing machine as all of my clothes, but as with everything else in my life I discovered and documented a multi-step coping process. With that in place, mostly they’re the same as normal diapers – you just roll them up, drop them in a smell-proof pail, and forget about the waste inside.

(Expansive cloth diapering made easy for people who just want to throw money at it without doing any crafting essay to come.) 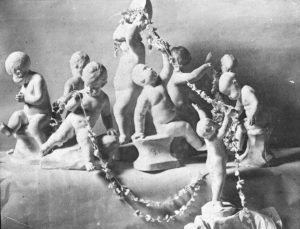 Around the six-month mark, a new theme emerged. The problem was not #2, it was #1. For some reason, EV6 viewed the diaper coming off of her butt during a changing as a signal that NOW IS THE TIME TO PEE EVERYWHERE ZOMG GO FOR IT. If that baby had any liquid reserved in the nether half of her body, it was going to gurgle up and out in a matter of seconds once that tush was exposed to air.

This was amusing at first, mostly because EV6 is so incredibly chubby that she looks like some sort of Rubenesque cherub meant to be cast in plaster, peeing off of the side of an Italian fountain. She never failed to giggle maniacally while it happened.

That got me through the first 10 or 15 sopping wet diaper changes. Then I got a little frustrated. Really, EV6? You couldn’t have done that five seconds earlier when the diaper was still beneath your chubby bottom, or twenty seconds later into a new one?

At wit’s end and running twice the amount of laundry to compensate for all the soiled stuff, we ordered a potty she wouldn’t topple off of. I mean, why not? If I could even point her at the darn thing in time it would save a lot of soggy trouble.

Then a magical thing happened. After I rushed EV6 from the pad to the potty in the first few changes, she stopped her reflexive peeing and just waited for the potty. In fact, on many occasions she stopped wetting her diaper entirely and just saved it up for the inevitable potty trip. Then, realizing she vastly preferred the constant dry diaper over an routinely damp one, she began to signal her need to visit the potty while she was still dry.

The first few times this happened I had no idea what she was trying to tell me. It’s not like I was trying to teach her potty-training. There was no established routine or special sign language vocab. I was just avoiding getting hosed down like a front-row audience member at Sea World during changes. Meanwhile, she devised this whole language of little grunts, claps, and sleeve-tugs to indicate her potty-readiness.

I wish you could have been there the day I figured out what she was telling me. Mind: blown. I had always mocked the idea of “elimination communication” as a whacky excuse to hold your baby over a chamber pot every five minutes, yet this little cherub taught me how to communicate about elimination.

If that was the whole story it would be awesome enough. Yet, that is not the end. No. This baby got even more awesome all on her own. Because, you see, though the focus of this exercise was never #2, suddenly she also began hold them for the potty. I have not dealt with a smelly diaper in months.

Like, twenty minutes ago – hilariously, midway through writing this post – we were laying on the couch, and she was like, “Yo, father, potty me.” And I said, “What? Are you sure? We were just there half an hour ago. Aren’t you comfortable here? Aren’t we snuggling?”

She proceeded to stare directly into my eye, mash one fist into an open palm, and grunt at me, as if to say, “You better take this mother-smooshing baby to the mother-smooshing potty RIGHT NOW.”

Up she went with a totally clean, dry diaper. Back we came, having deposited a stink-bomb into the potty rather then earmarking it for the washing machine.

I’ve never been down for this whole “babies are miracles” nonsense, but in this particular instance this baby has been miraculous.