You are here: Home / Personal / topics / thoughts / the new gig

Tomorrow will mark the start of my fourth week spent at home with EV, which will be the longest consecutive amount of time I have not worked since I was seventeen. 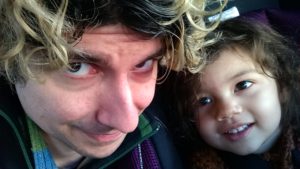 In January, headed to our post-X-Mas celebration with Drexel friends.

I am not on a vacation. Spending time at home with EV is currently my full-time gig.

It could have been a vacation. A sabbatical, if you prefer. I could have asked the execs at RJMetrics if I could take time off from leading the Customer Success team to hang out with my toddler and they would have said yes – not only because of the unlimited vacation policy but because it’s the sort of thing they all value and respect.

I considered that option for an agonizingly long while, because it would be insane to leave a job I enjoyed with a technology that delighted me and a team I personally recruited and loved dearly.

Over the past three weeks, I’ve come to accept that it was at once insane and also a very good thing. The two are not mutually exclusive.

The germ of this idea was planted last summer, after two particularly great days with EV. One was spent with my old roomies, Lindsay and Erika, picking blueberries and swimming in a lake. Another was a whirlwind first trip to the zoo with E’s sister and brother-in-law. Both occasions were riotous fun, but the thing that stuck with me is that they stuck with EV. She remembered them, even though she wasn’t even two years old at the time. She still remembers them now, actually – they’ve been mythologized and tucked into her permanent memory.

Then came Autumn: my birthday, cover band shows, the expected fourth-quarter stress at work. I realized that I wasn’t spending very much time creating those permanent memories – not only for EV, but for me, too. Each day was carefully choreographed to spend as much possible time working and seeing EV, but the resulting well-executed routine wasn’t memorable. EV spent the majority of her time with a nanny, since local daycares didn’t work with our unpredictable schedules. I was working to earn a salary that I spent a pretty large portion of on having someone else hang out with my kid.

I considered many permutations of how to improve the situation. I took days off to spend with EV. I changed my schedule to see more of her on days when I worked. We took longer walks, read more stories. I unplugged from work more at home. It was rewarding, but I had this niggling little voice behind my ears saying, “you’re still missing the best part.”

Amplifying that was the fact the present day really did feel like the best part. I have made no secret of how little I enjoyed EV’s baby phase. She was an awesome, easy-to-handle baby and I still strongly disliked the experience. Babies are adorable, but they simply are not for me. Things changed once EV could hold a conversation, which was the glimmer of hope that got me through the baby phase. Being a parent started feeling rewarding for both of us. (It helps that she remains an extraordinarily easy-going and healthy child, for which I thank all that is good and glamorous every day.)

That voice was telling me, “What if this part ends tomorrow? What if she hits her version of the terrible twos and your scant time together is spent in tantrum town? What if this stage of wonder just passes and you realize you didn’t enjoy enough of it? Are you going to experience your progeny in one-hour increments right up until she’s hoovered up by the industrial education complex?” 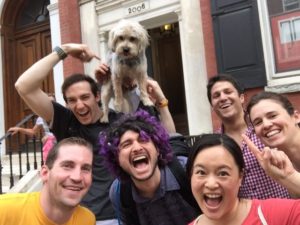 Scavenger Hunting with my RJ colleagues (our team won).

I was inclined to trust that voice because in many respects I felt the same way about my time at RJMetrics. I was entirely dedicated to the work from day one both in focus and time spent, but in retrospect I wish I had been more emotionally available when we were just 30 people, or 50 people. In my defense, coming from a decade in a corporate environment, I didn’t understand that “lean in” meant more than just “work real damn hard” at a smaller company. I still loved RJMetrics at 100 employees, but I would hear stories about shared experiences and fun outings that had been invisible to me, except for last year’s summer camp. I had this amazing opportunity, and I was so focused on hitting the metrics and deliverables of it that I skipped a ton of the experience of it. I missed the forest for the trees.

If I had to do it all over again, I would do it very differently – but, was I making the same mistakes with EV?

Most working parents have to continue to struggle with these challenges without a permanent solution. It’s just the struggle. I considered a long vacation – maybe even a sabbatical of a few months – but we had an employee of our own to consider: our nanny. I had no idea what would she do for months if I took a lengthy break unless I spent that time transitioning EV into pre-school, which would become immediately unfeasible once I returned to work.

I’d be at an impasse if I was on my own, but I’m extraordinarily privileged to have E as a partner who is also on a rewarding career path. As we discussed my feelings together, we landed on a possibility that I hadn’t seriously considered – what if I left my job to become a stay-at-home parent until this fear of missing out on EV was absolved?

The idea terrified me. I’ve never not worked. Career-wise, I had everything I wanted at this point in my experience. Literally, I had made a list of stuff I wanted to achieve and by the beginning of 2016 all of it had occurred. That made me incredibly happy and fulfilled, but it paradoxically meant that this Spring I had hit a natural cadence where I could step away with the least possible disruption to the business. Managers were in place below me, evaluations were completed, major projects were delivered, goals were set for the next quarter.

I was terrified, but if there were ever a time to go, it was now. I shared my plans with the execs, discussed it with our nanny, endured several days of crippling panic attacks that gave me major second thoughts, and then worked my final four weeks. My last day was my third work anniversary – April 29th.

I cannot emphasize this enough: I loved (and still love) RJMetrics. It was my dream job working with clients I enjoyed on a perfect path for my long-term career. And the people? They were the best people. It was a privilege just to be in their presence and to collaborate with them, let alone to be a leader amongst them. I had the unique chance to choose the greater of two goods in my life when so often we’re faced with the lesser of two evils, and for me the greater good was to take some time away from working to be a full-time parent to EV.

We’ve tripled our weekly pool time in the past three weeks.

Without making the leap of faith to join a startup and its constant incremental change I wouldn’t be able to do this. It was a hard decision that I did not know how to make before RJMetrics because I had spent my entire life avoiding the potential for failure instead of embracing it … along with the potential for massive success.

I know enough about myself not to make myriad promises about how this new venture will go. I haven’t over-scheduled my time with EV or set a series of goals for myself to tick off each day. I refuse to count the trees; I’m going to spend time in the forest. I’m also not taking a single day for granted or putting off anything until later. We’ve done more memorable things together in the past three weeks than we have… well, than we ever have, if I’m being honest.

I’m not sure how long this will last. I might feel as though this, too, is becoming routine. EV might really want to start preschool. I might miss RJMetrics too much or yearn to continue on my career path. She might decide I’m an asshole and prefer not to spend time with me.

(Hopefully that last one will come later.)

All I know for sure is that tomorrow morning I will wake up an almost-three-year old, she will give me a big hug, and we will get started on another memorable day.