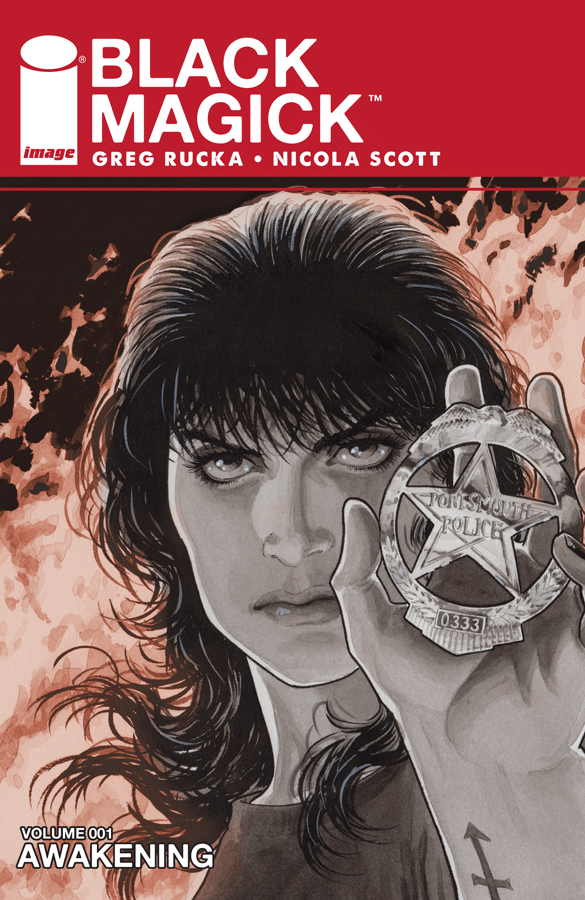 Scott’s world is filled with so much detail and organic motion that panels seem to sweep from one to another like a strip of film passing across the bulb of a projector. At points, I honestly forgot I was reading a comic book with static pictures and tangible pages. Scott’s art transported me.

The place to which I was transported is Portsmouth, where in the middle of the night a witches’ circle is interrupted by the ring of a rogue cell phone. Rowan Black is the culprit. She clumsily excuses herself from the ritual to head to her other vocation – as a detective called in to the scene of a hostage negotiation at request of a hostage taker she’s never met – but who seems to know her well.

That is just the first of many chilling coincidences that confront our heroine, who would be content to be a cop by day and contain her supernatural activities to her nightly circles. Despite some minor runes and glamours, we don’t see anything overtly magical until a terrifying final scene, yet the setting feels otherworldly. Maybe it’s Scott’s oppressive grays suggesting things lurking just around every corner. 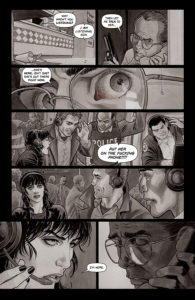 Greg Rucka’s first issue script is perfection, from its cold open in the witches circle to the aftermath of the hostage crisis. It contains zero exposition but tells us all we need to know about Rowan Black – plus a few hints of things we won’t be outright told. At this point I have fully conceded that Rucka can do no wrong. I’ve read him in so many different genres (noir, dystopia, steam punk, superheroes) and loved every one.

The pace of his script is deliberate – neither rushed nor decompressed. We move through the plot steadily, easily populating our world with cops, friends, and spouses, plus a shadowy syndicate who could be for or against Black. As Rowan’s fears continue to mount, it’s only Alex she can confide in an ask for assistance. Her trusting, almost doting partner Morgan can sense that something is amiss, but he’s in the dark about her magical double life.

Rucka is careful never to brand her as a hero. Yes, she’s a cop, and we don’t see her doing anything evil, but we get tiny pinpricks of hints at her past – a pinch of dialog so small you barely feel it. The weight of what we don’t know about her and how her magic works adds to the mounting dread as the series presses on, such that you never entirely believe she might not deserve what’s coming to her. Even after the closing confrontation with something clearly evil there is no indication we’ve met any character who is explicitly good.

Scott’s Rowan is svelte but with slightly masculine facial features and smokey eyes, a dead ringer for bangèd 70s rockers like Chrissie Hynde or Joan Jett. She wears a set of strong shoulders via her motorcycle jacket, but stripped of her outer layer by her hostage-taker or at dinner with friends she is more svelte. Yet, in scenes with her willowy blonde witch colleague Alex she looks imposing. Scott’s faces and figure-work are astounding throughout and make this a book worth starting at, but the clear choreography of her one fight scene shows she’s up for whatever mischief Rucka plans to weave into the story.

Original issues of Black Magick included additional back matter – a prequel prose story that filled in the story of this world. It does not appear here. While I realize it’s incentive to make the leap to buying single issues physically or digitally I can’t help but be annoyed. These are not supporting or critical essays that act as a fun bonus in single issue form – they are part of the world-building. To be deprived of them here feels like a cheat, which would dissuade me from buying another volume if this story wasn’t so damned good. (They’re probably being withheld for a future deluxe edition, which is even more annoying.)

It’s tough to end an Image first volume on such a cliffhanger when no further issues are printed. Though Rucka and Scott have every intent to return to this title (Rucka refers to #5 as “an intermission for Act One“), they are both part of the team on DC’s newly re-launched Wonder Woman at the moment with no sixth issue of Black Magick solicited.

In the meantime, Black Magick is slow-burning flame of read with sumptuous art, but you should only pick it up if you’re prepared for a long wait for the next edition. Otherwise, you might simply want to put this on a to-do list and wait for the eventual deluxe edition.