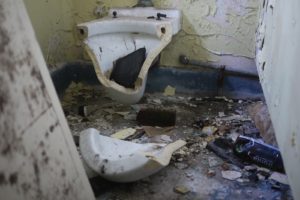 Last week was the six year anniversary of our buying this house and I still don’t know how to do anything.

Seriously. I still haven’t replaced a single fixture in six years. I’m great at fixing electronics (ask me about that one time I baked our television) and cleaning, but my list of house projects goes something like, “get poster framed and then beg E to hang it for me.”

Yes, she is a badass.

As for me, I refer to my combination of reticence and inability as “renter’s mentality.” This is the first home I’ve ever owned. My mother and I lived in three different rented homes, including one house for almost fifteen years. The only thing we ever altered – and I mean the only thing – was paying someone to paint-and-popcorn-ceiling a back room for me in a vomitous seafoam green when I became a teenager so I didn’t have to have a tiny shoebox of a bedroom with a connecting door to her room.

The wallpaper was uniquely hideous in every room, as if there was some sort of game of ugly oneupmanship going on when the house was initially decorated. The sole light source in the living room was a dilapidated chandelier missing several of its dangling crystals and bearing the tattered streamer of a long ago party. It had a certain Miss Havisham quality to it. The kitchen … it was the worst kitchen you can possibly imagine. I still have nightmares about it. It was carpeted, and that was the least-bad thing about it. We didn’t have much money, but I’m sure we could have done something about some of it.

Even though E and I owning our house removes all of the “didn’t own” aspects of that vicious triangle, I’m still stuck inside its three walls, held hostage by the tiniest of options. We want a new faucet for our kitchen and the idea that I have to choose a semi-permanent fixture for our home and then see through its installation was paralyzing.

I kind of sort of committed to a style and then stalled. What if the finish didn’t exactly match the rest of the kitchen? How could I pick a new handle I’d be interacting with dozens of times a day without an intense, hands-on study of UI, UX, and ergonomics?

(Are you beginning to understand how hard it is to be married to me?)

This past Sunday, E looked me in the eye and spoke in the kind of calm, measured voice you use when you’re trying to approach a wild animal without spooking it.

“Peter,” she crooned, “we really need to replace the toilet in the master bathroom.” She saw the fear in my eyes. The toilet. That’s permanent porcelain piece of furniture!

“The tank does not fit into space between the bowl and the wall,” she continued, soothingly, “and so it has a bad seal to the floor. The plumber said he couldn’t fix it again with caulk. It’s time.”

I gulped and nodded imperceptibly. It was a perfectly good toilet! How could we throw it away? It would probably cost untold thousands of dollars to replace and could result in the demolition of the entire bathroom – we might have to knock down a wall in the back of the house and get a crane into the back yard to winch it out.

“You just have to talk to the plumber.” This is the part where you have locked eyes with the animal and are slowly backing it towards the cage in which you are trying to capture it, for its own safety and yours. “Just find out what we need to do.”

Today is Friday. I managed to be busy enough with car repairs and writing and hanging out with our little scamp that I avoided the call all week, but this morning I knew I had to bite the bullet and talk to our plumber – not the hardest call, since he is the most patient human being in the universe who once had to respond to my emergency call after I crashed our car into our house.

I made the call. I described the problem and braced for impact. Would we need to move out of the house for a week while he did the repairs?

“Oh, I could stop by with the toilet on Monday if you want,” he responded.

Did he mean, stop by with his team of burly men, fleet of construction equipment, and double-wide trailer for porcelain throne hauling?

I was in awe. How much would such a feat cost? Could we afford it and continue to feed EV her diet of copious fresh fruits and vegetables, or would she spend her fourth year of life eating ramen, exclusively.

I was so relieved, I followed up with, “Hey, do you replace faucets?”