You are here: Home / Personal / topics / thoughts / Cover songs or originals – which are easier to play?

We held an unusual rehearsal in our dining room today – three hours of running through the Smash Fantastic cover song repertoire, but as fronted by my Arcati Crisis co-writer and BFF Gina. 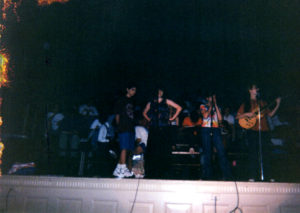 An incredibly rare, one-of-a-kind shot of the first time Gina and I performed music together on stage (also the first time I sang solo in public!) This was in 1997 at Masterman, peforming “Sharks Can’t Sleep” by Tracy Bonham. From left to right: me, Joanna, Lucy, and Gina.

The strange arrangement is the result of being asked to play a big benefit show during a week where Ashley will be on vacation. It’s a fun show and we love donating our time to it, so Ashley gave her blessing for us to play it with a fill-in vocalist.

Despite you all knowing Gina primarily for her amazing songwriting and intuitive harmony vocals, she is an awesome interpreter and karaoke veteran. It helps that the rest of the band – Jake, Zina, and I – is the same for both Smash Fantastic and Arcati Crisis.

It was a rollicking rehearsal full of surprises – for example, after over 20 years of friendship I found out that Gina loves “Because The Night” as much as I do, but she does not quite know how to sing Queen’s “Somebody To Love.” We also played a rare pair of our own “Holy Grail” and “Better” with Gina on vocals but not on guitars!

The most interesting part for me was the conversation while we packed up. As we were coiling wires, Gina mentioned off-handedly that she found getting the cover songs right to be much more challenging than playing in an original band.

That took me by surprise! Gina is a confident, experienced singer – I would never expect she would be stressed by cover songs. In fact, I invited her to fill in because I thought she’d find singing two hours of covers a relief in comparison to the stress of shredding through our own songs. However, her reasoning resonated: when you’re covering a song, there’s an existing standard to be held to. As great an interpreter as you may be, you’ve got to get the lyrics right and hit the expected high notes before people will even begin to consider if your performance is any good.

I know that’s the reality, but I’ve never considered it that way. For me, cover songs are a fun vacation from the intense challenge of playing original music.

With cover songs, you simply have to capture the spirit of a song people know well. While Jake tends to hew closely to the real basslines of songs, Zina and I approximate their drum fills and guitar riffs. It’s about verisimilitude. If you give a crowd a hint of the real thing, they don’t notice all the elements you leave out.

That works in our favor on songs for which we can’t quite assemble all the elements of a recording, but it also works in our favor – our covers of “Bang Bang” and “Uptown Funk” dress up the more bare originals considerably with additional passing chords, while even on a classic like “The Way You Make Me Feel” Jake has installed a more propulsive bassline that is only implied in the original. 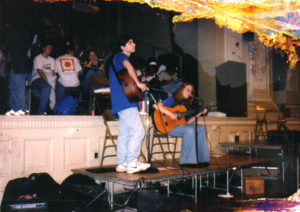 The first time Gina and I played guitar together in front of people! This was in 1998 at Masterman, playing U2’s “With Or Without You” for the departing senior class. Psychedelic water damage courtesy of my Sophomore year apartment.

By contrast, playing originals is terrifying! The only context the audience has are the notes coming from the stage. There is no earned good will or existing song that will put a smile on their face. And, even when you’re in top shape with a set of good songs, it’s impossible to know when they’re good enough.

It’s like doing yoga – you can always challenge yourself to sink deeper into a pose. I have songs that are nearly 20 years old that I still haven’t mastered playing; I found extra harmony on one just a few weeks ago that makes it sound more like itself than it ever has before.

Gina doesn’t have that anxiety. To her, an original song is something entirely under her control not only to interpret, but to shape and transform. The entire point of the thing is that it belongs to you and it might continue to evolve. That’s nothing to be afraid of – it’s a joy.

I was so intrigued that as best-friends and co-writers Gina and I could differ on this point, but it explains a lot about our relative comfort over the years as performers. There’s no disputing that I’m more vivid and energetically myself on stage in Smash Fantastic, just as Gina is obviously transfixing in Arcati Crisis when she settles into playing an original like “Song for Mrs. Schroeder.”

It will be an interesting eight weeks of getting 30 songs ready for this cover gig, but I think I’m even more intrigued by what Gina and I will know about ourselves afterward when we turn our attention back to originals for the first time in three years.

Previous Post: « our supersized supermarkets
Next Post: New Collecting Guide: Marvel’s Cloak & Dagger (and an explanation of who they are) »