You are here: Home / Personal / topics / thoughts / your princess is in another castle

Without realizing it, each Wednesday for our weekly adventure I have gotten in the habit of dressing EV in her “This is what a programmer looks like” t-shirt from Django Girls, a non-profit that helps women learn to code. I hadn’t even realized the pattern until I scanned through our recent photos and saw the shirt again and again in the shots from Wednesdays.

I really love when EV wears that shirt. It’s awesome seeing examples of diversity of gender and race in the tech community, and there’s something even more powerful for me to see children implicated in that. That programmer woman you so desperately wish you could add to your team isn’t a magical unicorn who you could easily identify out of a lineup of women. She’s a person. She started out as a little girl. That is what a programmer looks like. 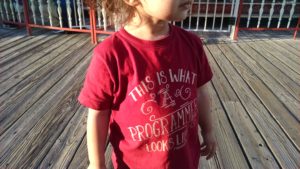 EV a few seconds after this week’s “princess” incident.

However, this week I discovered an extra layer to adventuring in our “programmer” shirt when someone repeatedly referred to EV as “princess.”

We do not use the word “princess” in this household.

It was one of my early edicts of parenting even before a little girl emerged in the delivery room. I don’t like princess culture. Yes, they’re lovely and the stories are classic. It’s wonderful that princesses are increasingly portrayed as active, adventurous, and empowered.

However, even the most well-intended princess is still a princess. They’ve either won their status via a birth lottery that blessed them with royalty even as it cursed them with the prick of a spinning wheel or they romanced a prince who won a birth lottery and have now gained elevated status all thanks to love.

Neither is a message I feel needs encoding on a toddler whose brain is a sponge. Do we insist that every hero a little boy idolizes be a prince? No – more often the heroes presented to boys have earned their status through their actions, even if they are frequently working from the same book of “chosen one” tropes.

I see how EV absorbs every little input. She will reference minuscule details of events from weeks or months ago out of the blue with perfect recollection. It’s not special – it’s what toddlers do. What happens when you feed that spongey brain the message about birth lottery and marrying into status over and over and over again as the underpinnings of an otherwise innocuous and delightful story before they even understand how to consume stories?

Maybe nothing. Maybe just the pathological need to dress up in fancy dresses. That’s fine. It’s the other implications I dislike. Glam knows that plenty of today’s most successful women consumed these stories as kids, but why sandbag a little brain with confusing messages? I don’t think it’s ever too early to teach a doctrine of free will, nondeterminism, and consent, and princess culture can undermine all three.

I try not to get the claws out over a stray “princess” from someone speaking to EV the way I did at first (especially when it’s from a woman, because it lacks a leering aspect of condescension isn’t as present when it’s from someone of the same gender). This week I let the first mention from a man slide by. Then there was a second, and I bit my tongue. The third, delivered with him crouched down at eye level with EV, set me off.

“I think you meant ‘programmer’,” I said.

“You keep calling her ‘princess.’ She’s not a princess. Stop saying that.”

What I should have added was, “She’s not a princess now and she’s not aspiring to be one, either. So, you might as well call her ‘programmer.’ Or ‘doctor’ or ‘director’ or ‘engineer’ or ‘professor’ or anything, really, but certainly not the one thing she will almost certainly never be, because Kate Middleton is an extreme outlier. At the very least, can we settle on, ‘big girl’?”