You may recall that I was a huge fan of Violet Chachki’s aethsetic on last year’s seventh season of Drag Race, so whenever she tweets about a fashion or art influence I’m generally all ears. When I clicked through this tweet, I was expecting to learn a little about Helmut Newton, not get absolutely slayed by an amazing pop song.

ALL THE RAGE Allie X
Loooooove all the Helmut Newton references in this! had so much fun making this! Best part… https://t.co/lcJ6OOz7Sb

Quite suddenly, I was introduced to the pop genius of Allie X on her new single, “All The Rage.”

“All The Rage” is slightly squalling and I might not have made it through the full length had it just streamed without a visual. That would have have been a mistake. Luckily, this weirdly transfixing low-budget video held my attention long enough to hear just how many hooks are tucked away in the electronic cacophony of synthesizers.

I bought it approximately 15 seconds after the video ended.

There are so many jagged little bits of lyrics and melody. It starts with a wickedly catchy repeated refrain that jumps an octave on the word “up” while descending just a second on “down / out.” I didn’t automatically catch the intervals on first listen, but the machine-gun delivery paired with the up/down device is an immediate earworm. I was singing it back before the song was over – always a good sign. 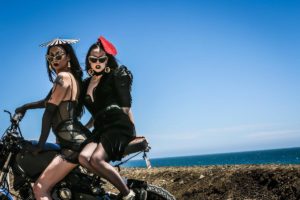 Then, the pre-chorus uses a clever and very Gaga-esque trope of starting mid-word, then repeating the word and rhyming it. You have to be careful not overuse these sort of tricky dropped sound devices, but here’s it just enough.

Then, the core is pure shout-along pop in the mold of Icona Pop. The underlying sound never rely changes, but each section of the song is transformed by the vocal. Coming out of the chorus, the top of the second verse is in the highest, purest tone Allie X summons the entire time. The contrast is great.

It’s pretty rare for me to get blind-sided by an artist who already has an album out – her debut, CollXtion I – so I cannot believe this will be from her sophomore effort – especially when Idolator intros this song by saying, “Allie X has quietly put together one of the most consistent bodies of work of any new pop artist over the last couple years.”