This post is not about the X-Men. I really thought it was going to be. Instead, it’s about Monsters Unleashed.

Marvel unveiled a string of five nearly identical teasers in the past few days. Each teaser shared an anonymous acronym (“MU” is frequently used to mean “Marvel Universe” or “Marvel Unlimited”), and all the same information save for a differing headline artist.

It seemed that – unless Marvel planned on pulling a fast on on us – the teasers certainly were X-Men related.

Why? First, there was the matter of the creators. Cullen Bunn is the current Uncanny X-Men writer along with Greg Land on art. Land has now spent nearly a decade on an on-and-off run across three volumes of Uncanny X-Men – it’s arguably what he’s now best known for.

Three of the other artists are also famous with Marvel readers for past X-Men milestones – Steven McNiven on Old Man Logan and Death of Wolverine; Adam Kubert on the flagships in the 90s and the launch of Ultimate X-Men; and Salvador Larroca (hot off of the concluding Darth Vader) on X-Treme X-Men, a 20-issue mid-00s run of X-Men Vol. 2,  and the recent Cable & X-Force. Even the least X-ish of the artists, Leinil Yu, had a notable run on Wolverine.

Then, there’s the context. In July, Marvel announced a raft of new Marvel Now titles while staying curiously silent on the entire X-Men slate. True, in that announcement was news of Death of X and shortly after Inhumans vs. X-Men. Yet, we still got confirmation of the continuing Uncanny Inhumans ongoing with the Now titles.

Finally, there’s the little details. The brushed steel of the logo is reminiscent of the look of the X-Men film logo. Furthermore, if you look very closely, you can see what looks to be claw-marks on it… perhaps of a certain mutant who has been dead for a few years now? 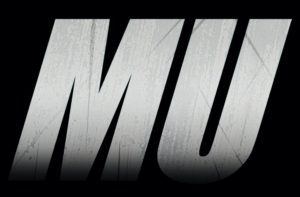 In the cycle of teaser hype, it seemed like all of these facts pointed to a consolidation of one or more X-books into a weekly ongoing saga with five of the hottest artists at Marvel rotating on illustration duties. Weekly books are historically a DC tactic, but Marvel teased at it in 2015 with a Wolverines book.

The strategy makes sense for X-Men above all other titles, since they have a core of rabid, buy-everything fans who would absolutely show up for a single book 52 times a year – heck, that’s less X-issues than we’ve had to keep up with in years. Marvel could make money and sate a loud-mouth group of fans all in one go.

It turns out they pulled a fast one on us. The teaser campaign was for Monsters Unleashed. 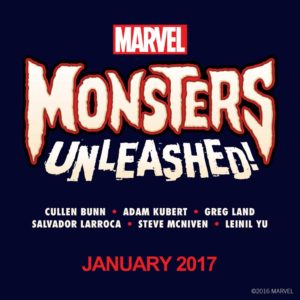 I’m not one to yell, “[insert publishing company] is trolling the fans,” because that is a ridiculous statement. Why would a publishing company do that? They want the fans to buy their product and spread the word about it.

Yet, I can’t help but feel a little bit like Marvel is trolling the fans here.

They can’t help that big artists tend to have worked on X-Men at some point, but they didn’t have to lead with the Bunn/Land team-up when that’s obviously an X-Men pairing at the moment. Perhaps it was the font treatment on the teasers which isn’t echoed in the slightest by the announcement. And, maybe it has a little to do with Bunn really only succeeding at Marvel with Deadpool and X-Men, with his other titles failing to catch fire with fans.

That leaves entirely aside that the marketplace has repeatedly indicated it does not want big-two monster books. DC tried a wave of them in 2011 and they all sputtered out – even great ones like Frankenstein and I, Vampire.

Marvel has also tried to jumpstart its monsters franchise several times. A Where Monsters Dwell mini during Secret Wars debuted with less issues sold (26.5k) than low-tier titles that were concluding prior to the event. All-New, All-Different Marvel’s Howling Commandos of SHIELD had the springboard of both coming off of a (Mrs.) Deadpool team-up and the SHIELD name. Despite a solid debut in October (44.5k), it lost 50% of buyers with the second issue and was cancelled with issue #6 barely breaking 12k copies sold.

I’m not saying that I don’t want monster titles or that Marvel shouldn’t try them. I love when Marvel tries things! That’s how we got amazing books like Hawkeye and Squirrel Girl. Heck, those two DC monster titles were some of my favorites of the entire New 52 relaunch.

Maybe this slate of superstars will finally be the ones to give monsters a considerable bump with Marvel fans. I’ll definitely read it – I love all of these artists (yes, even Land) and enjoy Bunn even on his less-read titles.

However, I’m not going to be as excited to pick it up as my fantasy X-Men weekly.