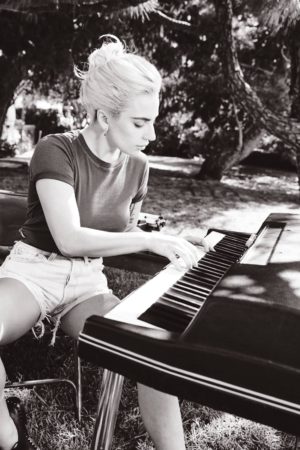 Something that gets lost in all of Laga Gaga’s glamorous pop and newly- found country leanings is that one of her major influences is Bruce Springsteen, but you can hear it loud and clear on “Come To Mama.”

She discussed Bruce’s influence during the lead-up to Born This Way, which made sense given the highway sensibilities of the record plus Clarence Clemmons appearing on the Bruce-esque “Edge of Glory.

So I remember it was the hardest thing for me. I was playing these huge (classical) pieces, like 15 pages long, … and then there was this Bruce Springsteen song. I opened up the book and there was like chords, guitar chords. I was so confused. I didn’t understand it, so I just started to read it and eventually, eventually I got it down.”

While “Come To Mama” doesn’t have the fine detail of “Thunder Road,” it has the populist aim of Born To Run and Springsteen’s penchant for slick thievery from his own deep list of influences that includes doo wop and 60s girl groups.

Come to mama. Tell me who hurt ya
There’s gonna be no future If we don’t figure this out

Oh, come tomorrow who are you gonna follow?
There’s gonna be no future If we don’t figure this out

The chorus of “Come to Mama” is deeply, deeply Springsteen influenced, with a girl group shuffle full of triplets and boozy sax playing beneath it. Sonically, this is how “You and I” should have sounded like on the record. “Mama” lends itself even better to the 80s rock dressing with a few simple violations of its key signature – a major sixth chord wedged into the verse and the chorus ending on a major-to-minor transition on the fourth.

All of the bombast of the production makes it easy to overlook just how clumsy the verses of this song are. It took me a week of listening before I began to cotton on, and then I had to reading the lyrics to figure out just what was happening. Here’s a sample.

If you dig through all of the sax blasts, hand clap snares, and shoutback lyrics, you realize that verse is about if the biblical flood was literal and whether rainbows are magical or not. I mean, this Lady does have a song called “Highway Unicorn,” but this is a little far even for her.

Without knowing exactly what Father John Misty contributed to this track, I’m going to go ahead and blame him for all the awkward parts. “Come To Mama” fits with “Sinner’s Prayer” in having some of the least Gaga-sounded lyrics of all Gaga songs, which are again uncharacteristically nonsensical. The awkward equivocation in the verses doesn’t vaguely match the sharp choruses, which carry Gaga’s recognizable message of positivity and acceptance.

Here’s the thing – it doesn’t really matter. Unlike “Sinner’s Prayer,” which doesn’t have a lot going for it other than its lyrics, this song has everything going for it to the point that Lady Gaga could have just scatted the verses and it would have the exact same impact.

Yeah, the Springsteen sound sticks out like a sore thumb on the record to this point, but the next song softens the blow. Plus, I honestly believe this is what Gaga would sound like today if she was fronting some bar band like mine, and in that respect it’s right at home with Joanne‘s themes of authentic self.