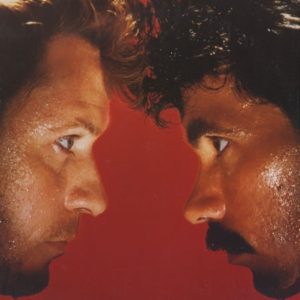 One of my earliest musical memories is of her playing “Maneater” on repeat for us as we sat in our rocking chair. I know this was an early memory because the turntable was on a set of ramshackle shelves built by my father before my parents separated, rather than its later home on the other side of our living room.

Here’s what I understood about “Maneater” at the time: it was about a creature, like “Thriller.” She ate people! It had a throbbing bass line that was good for bopping along to. Also, it was on an LP called H20, which meant water but also meant Hall & Oates. Basically, it was the most clever thing anyone had ever thought of.

As a toddler, I may have missed a few entendres.

As with a lot of my early-in-life vinyl favorites, I completely lost touch with Hall & Oates as I grew older and amassed my own record (and, later, CD) collection. In fact, unlike Madonna and MJ, who I began spinning again in college, Hall & Oates didn’t make their return to my collection until 2010 inspired by the requests of my communications-buddy and cube neighbor, MK.

Revisiting “Maneater” as an adult and a musician, a whole new set of elements stick out for me.

The intro is a familiar Hall & Oates gimmick – a long minor-key instrumental that gradually adds additional instruments (bass, keyboards, a trickling water effect, and smarmy saxophone) and then pops into the relative major key for the verse. 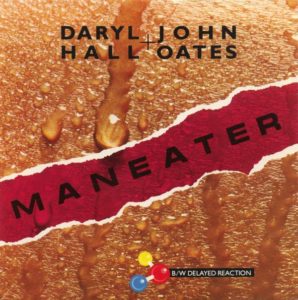 The lyrics are as lurid as those of my other childhood favorite with an awesome bassline, “Billy Jean.” Here, H&O are unsubtly describing falling in love with a sex worker – or, at least a woman who is ready to devour any high-roller who enters her life.

What makes the song interesting to me today is this line: “If you’re in it for love you ain’t gonna get too far.” Who exactly is pursuing the Maneater, in the context of the song? Is it another rich boy, unware that he’s about to be drained dry? Or, is it someone who is genuinely falling for her.

If the latter, who are H&O to warn him off? Maybe he’s the true love that has been missing from all of Maneater’s conquests.

We’re not meant to know. Hall & Oates wrote fantastic songs, but they weren’t ever especially known for the complete narratives of their lyrics. If you don’t believe me, please share – what is the “That” for which “I Can’t Go For”?

Even without a coherent story, there’s no doubt that “Maneater” is one of Hall & Oates’ stone cold early-80s classics.