[Patreon-Nov16-Post-Bug][/Patreon-Nov16-Post-Bug]How do you remember the moments that changed the course of your life? Can you replay them perfectly over and over in digital crispness? Did time stand still? Do you feel like you were standing outside of yourself, watching, so you can rotate the entire scene around you like a panorama?

I didn’t realize it at the time, but the first time I saw Peter Mulvey play it altered the course of my life. There’s some other timeline where young Peter stayed at dinner at Serrano’s a little bit longer and skipped seeing the unknown opening act for Susan Werner and missed him entirely. 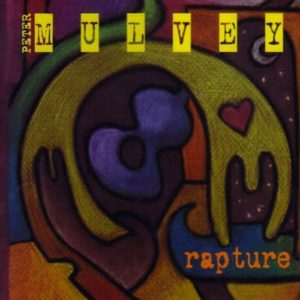 If you have Amazon Prime you can stream this AMAZING record for free! Just click!

Would I have still heard his music down the line? Maybe, but it would not have had the megaton impact on me as seeing Peter Mulvey at the height of his youthful powers from less than ten feet away.

At the time, male singers comprised approximately 1% of my CD collection, so seeing his name on the bill had no special meaning for me. My friend Rachel and I took our reserved seats at a table in the front of the house and waited for the opening act to take the stage.

He was everything I loved on guitar and something more – all of the DiFranco tunings, all of the percussive, staccato strumming, plus other things – partial capos and half barres over open strings. My songs like “Icy Cold,” “Lost,” and “Relief” could never exist without him.

One of the less show-y songs in his set was “On The Way Up,” a song from his seminal album Rapture. It didn’t have the pyrotechnics of his half-capo, mega-detuned “Love Is Not Enough” but it still left its mark. It’s a simple tune in three, a song about constantly rising but never feeling like you’re enough – not for yourself or for the partner you love.

I think it was the song that won my mother over to Peter later, listening in our tiny red kitchen, so that she became my companion for future shows. And, later, it became one amongst E’s many favorites. We used to refer to it as “our hypothetical, eventual first dance,” for an equally hypothetical, eventual wedding we weren’t discussing seriously.

Which brings me back to Serrano’s and The Tin Angel, 11 years later. Peter Mulvey was playing there on a Friday night, and E and I were attending with both of our mothers for their birthdays, which were 11 years apart. I had reached out to Peter earlier in the week to see if I could stop by during his soundcheck and have him finally teach me the proper way to play his song “The Wings of the Ragman,” which I had approximated here on CK in Trio but never quite could get the hang of.

E did not want to join me, but I insisted. “He’s my guitar idol,” I pleaded with her. “This would be like if you got to sing with…” I sputtered, “I don’t know. Pat Benatar. What if you were going to sing with Pat Benatar? I would come and witness that moment, and maybe snap a photo for you.”

E finally acquiesced, and so we found ourselves upstairs in the Tin Angel just after 6pm on a Friday, the room empty save for the two of us, Peter, and the sound man. Peter came back and said hi, shook our hands, and asked me if I wanted to get out my guitar and run through “Ragman.” I complied, just barely, my hands shaking so much I could barely get into the right tuning. He started walking me through the song, explaining in his easy way why certain voicings were different and why he was using the dominant and so forth before eventually realizing I was ready to faint and saying, “You know what, maybe I should write this down for you.”

And that is how I sat and watched while Peter Mulvey tabbed out his own song for me.

That is not the end of the story.

After we were through with my lesson, he said, “You know, you ought to stick around while I sound check. I might play a few things I won’t be doing during the show.” E and I found ourself seated in the first row of chairs behind the door of the Tin while Peter walked up on stage and began working with the sound guy to get his guitar EQ just right. After playing the portions of a few songs, he began to play “On The Way Up.”

I leaned over to E.

“We should dance,” I said, in a husky whisper.

“Dance?” she replied, incredulously. “You want to dance?”

It took some coaxing, but I convinced her to get up out of her seat and waltz subtly with me at the back of the club.

“You know, while we’re here and he’s playing this song, maybe we should ask him to play our hypothetical, eventual wedding.”

“Peter,” she hissed into my ear while we waltzed, “that is crazy.”

“You’re right,” I said, slipping my hand into my pocket to draw out a tiny black box, “that why I asked him to play our engagement instead.”

And that is how E and I became engaged. You see, I had been trading emails all week, first with Peter’s management, and then with Peter himself, to arrange this setup, having already obtained a ring which was proverbially burning a hole in my pocket. To his eternal credit, Peter tried mightily to talk me out of my plan to make sure I wasn’t doing something silly or fannish, but I eventually prevailed upon him how much the Tin Angel and his song meant to me and to us, and so he agreed to play along.

Also to his eternal credit, when Peter saw that the deed was done, he effortlessly segued into “Jesu, Joy of Man’s Desiring.”

Here is Peter Mulvey playing “On The Way Up” during his set that evening: