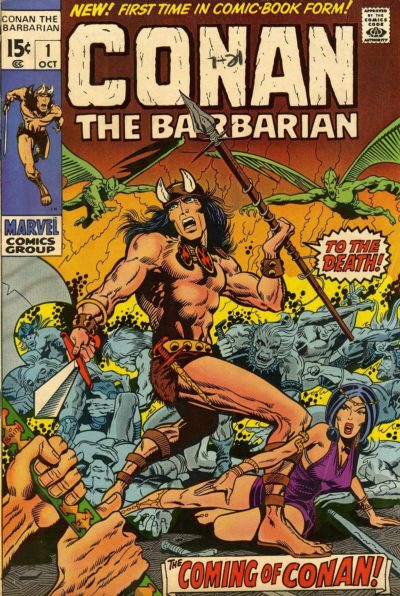 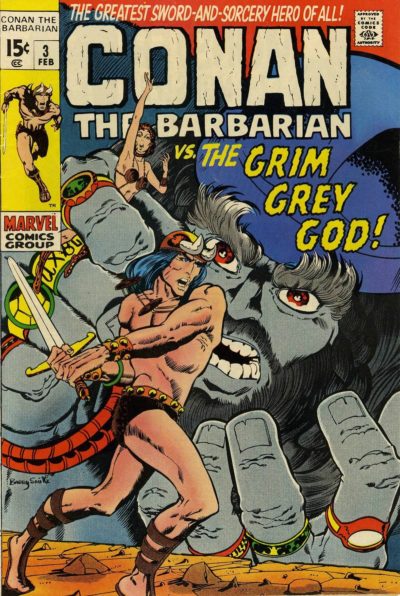 These early Conan stories were written entirely by Roy Thomas, and they have a relatively set formula. Issues tend to open in the midst of conflict, or with Conan wading into a trap. There’s often a brief alliance with a gorgeous woman who is brutally killed. Conan is frequently too stubborn to retreat once gaining the upper hand, determined to continue until he slays the big bad or burns down an entire city, tower, or dungeon.

While Conan’s genre is described as “Sword and Sorcery,” that might give you the wrong idea about the action. In the first 24 issues, Conan is fighting men for over three quarters of them. Beasts tend to be singular and not too fantastical – just giant-sized or semi-sentient versions of things like apes, lizards, or spiders. When he does fight magicians, it’s not a D&D style battle with thrown fireballs – the magicians tend to be controlling beasts, or undead armies, or some form of glamour.

Over the course of the issues Conan begins to develop a personality and a moral code that makes him less of an anonymous warrior for continuing readers. Yet, this is still meant as an anthology-style pulp story, which explains the repetitiveness of some of the story beats. Conan The Barbarian is not a comic meant for binge-reading. It’s more of an issue-a-day sort of series. 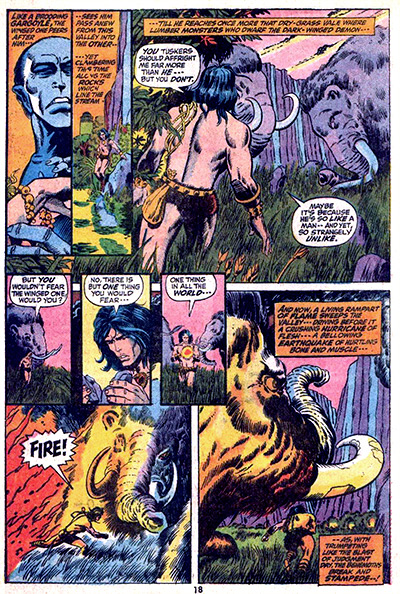 Panels from the original comics are breathtaking, which is why I’ve included two of my favorites here with my own color balance. Unfortunately, reprints of this run have used a heavier hand on color correction, erasing the bold presentation of the original issues in favor of a muddier, modern take on the colors. The majority of voters are likely wishing for a faithful restoration of the original, rather than a digital remaster.

Will we see this omnibus in 2018? Maybe, but not in the way we think of a Marvel Omnibus.

Dark Horse owns the reprint rights to Marvel’s complete Conan library. They don’t currently have a regular format that’s equivalent to Marvel’s Omnibuses, although they did produce a single massive The Colossal Conan to collect #51 issues of their own 2003 Conan series.

However, that’s not typical of Dark Horse’s collected output. On the higher end side, they produce Library Editions – books in the 200-400 page range that are slightly taller and much higher in quality than omnibuses for a similar price per page. On the paperback side, they’re known for massive 500ish page paperback omnibus volumes that are absurdly affordable.

With Dark Horse through with their Chronicles of Conan reprints, why wouldn’t we leap to Library Editions with this content? Well, the thing is… we already have. The Barry Windsor-Smith Conan Archives collects all of the BWS issues from #1-23 in Volume 1 and Volume 2.

We could see a paperback omnibus instead, likely collecting the first three Chronicles of Conan paperbacks, but that’s not really what voters on the secret ballot have in mind. 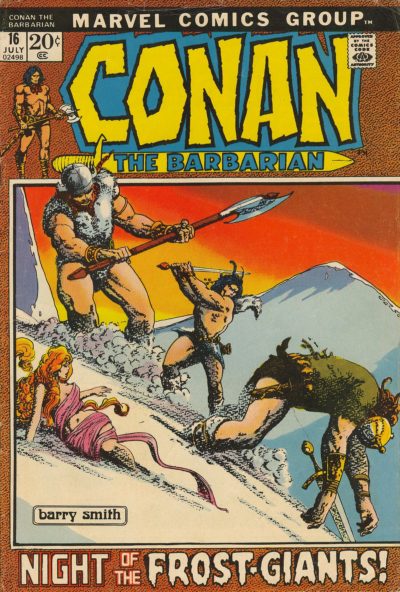 Basically, voters want The Colossal Conan The Barbarian Volume 1, which Dark Horse could follow with an additional four or five volumes to collect the entire series if interest persisted – although, that would be hard to gauge given the added punch of this volume collecting all of the BWS material.

Would I recommend buying it? Yes, if you enjoy early Bronze Age comics and the swordplay of Conan.

I’ll be honest – I’m entranced by this material in concept. In reality I find it a very slow read that I’m not necessarily in love with as I’m reading, although I tend to remember it as a massive, fully-realized cinematic epic – as if I watched a high-budget film of what the comic depicted.

I can tell that the comics are good, but reading just one before bed is plenty of Conan for me. Each issue is like its own mini-novel.

(Is that how some modern fans feel when they get recommendations to read key Bronze Age superhero tales like Dark Phoenix Saga or Wolfman’s Teen Titans?)

I suspect I would enjoy an accurate restoration of the artwork rather than the digital recolor on the current Chronicles reprints.

What does Conan fight?

You’re Conan. People say you’re a barbarian, but that’s kind of a slur for Cimmerian. To be fair, you do kind of fight everything in sight that you’re not interesting in shagging.

I gave myself 60 seconds to page through every one of these early issues to see if I could quickly summarize who Conan is fighting in each one. Some of the descriptions are… let’s say, purposefully reductive. Sixty seconds isn’t much time to spend with these wordy comics! 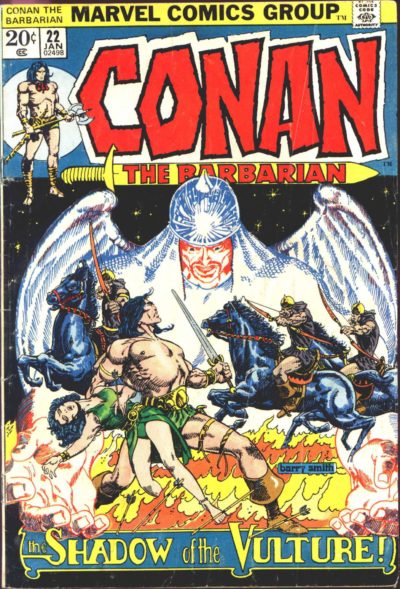 Conan is on the Aesir side of a brutal conflict between Aesir vs. Vanir (plus their Shaman and his horde of flying demons), even though he’s more of a freelance barbarian who is scared of sorcery.

Conan is adventuring through the snow of Aesgaard, where he slays a frost giant just for being himself before being lured by a pretty face into the trap of Brutorian slavers, against whom he starts a successful rebellion.

Adapts “The Grey God Passes,” where Conan gets in the middle of a war between Hyperborea and Brythunia, whose dead are claimed by a fleet of Valkyries.

Adapts “The Tower of the Elephant,” where Conan gets into a barroom brawl and then fights a giant spider and puts a green elephant demon named Yag-Kosha out of its misery.

Adapts “Zukala’s Hour,” where a Zamorian village trembles in fear of a tax-collecting total babe of a were-tiger, who wants to settle down with Conan.

Still in Zamora, Conan falls prey to a lovely grifter playing the long haul, is racist agains a citizen of the “imaginary” nation of “Zembabwei,” and eventually fights a giant bat because it gets in the way of shagging said grifter.

Adapted from “The God in the Bowl,” Conan falls into the employ of a haughty women as her chariot driver despite not having any experience (oh, to have the confidence of a barbarian!) and battles a murderous serpent-god. 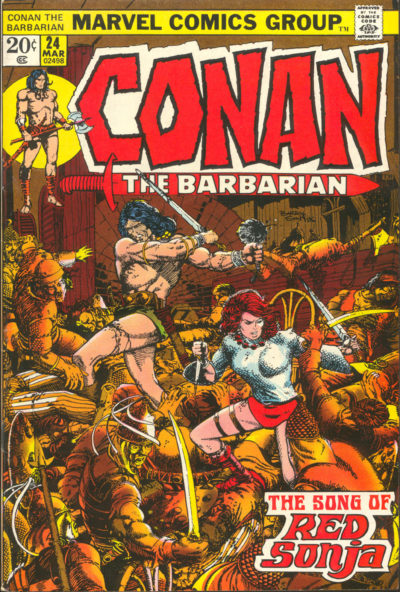 Adapted from “The Garden of Fear,” Conan fights barbarian-er barbarians and an ebon hawkman in a particularly gorgeous issue.

Conan and Jenna (a femme fatale who survives more than one issue!) fight some guards and fights the Bull of Anu.

Adapted from “Rogues in the House,” Conan is jailed after Jenna turns him in and has to fight his way free, including slaying a man-ape losing touch with his human manners.

Conan is ambushed by desert guards demanding he pay a tribute to their queen for drinking from their oasis. The tribute is sex. Later, he is left in a dungeonous sewer to be eaten by an angry octopus.

Conan is left for dead in a dessert, beats a bird to death (just a normal bird, not, like, a giant one or anything), and fights a local spider-god.

Conan fights the albino, drugged-up Elric, though they later team up.

Conan and Elric fight assorted demonic creatures, though its his disposable lady companion who battles Terhali, Green Empress of the Melniboné. 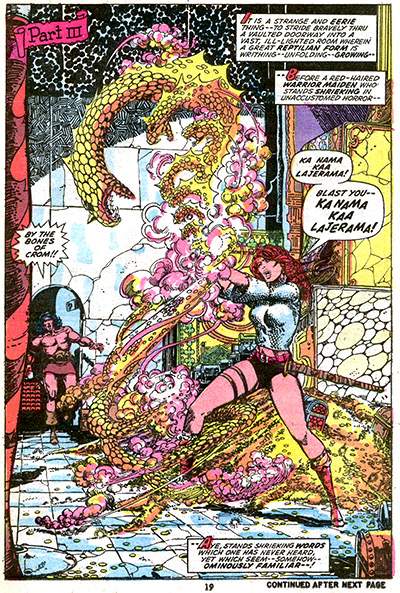 Adapted from “The Frost Giant’s Daughter,” Conan slays an impressive amount of Vanir and chases the Frost Giant’s daughter around. In a back-up, he fights the Wizard Trull and his creations.

Adapted from “The Gods of Bal-Sagoth,” it’s Conan’s first comic adventure on the high seas! At least, briefly, before he and the Vanir captain go overboard and wind up embroiled in the overthrow of a Bal-Sagothian high priest.

A rare Conan story continued into a second issue! Conan and his uneasy Vanir ally Fafnir continue their vacation in the city of Bal-Sagoth, first defending its new queen Aala from the murderous former high priest but later fighting against her forces.

Conan continues his adventures with Fafnir as they invade the city of Makkalet.

Continues from the end of the prior issue. Conan takes another trip into the city of Makkalet to try to find some purpose behind their previous siege and all of the death that ensued. A relatively brainy issue, for Conan.

Adapted from “The Black Stone,” Conan is still stuck in Makkalet, and takes on a mission for the king and queen – to ride to the city of the queen’s father to ask for aid in the never-ending seige of Makkalet. However, he is waylaid in his journey.

Adapted from “The Shadow of the Vulture,” Conan finishes his mission but dislikes the civilizes surroundings of Makkalet’s sister city, yet an entire army gives chase – but the mercenary soldier Red Sonja intervenes. Conan returns to Makkalet

Conan and Sonja continue to carouse in and defend Makkalet.

Previous Post: « Spring Thing: s’mores in the yard!
Next Post: Thor: God of Thunder by Jason Aaron Omnibus – The #53 Most-Wanted Marvel Omnibus of 2017 »