Killraven is the #46 Most-Wanted Marvel Omnibus of 2017 on Tigereyes’s Secret Ballot.

Who is this futuristic, pulpy, non-superhero that Marvel created from scratch and should you care? I’ll explain it all below. Visit the Marvel Masterworks Message Board to view the original posting of results by Tigereyes. 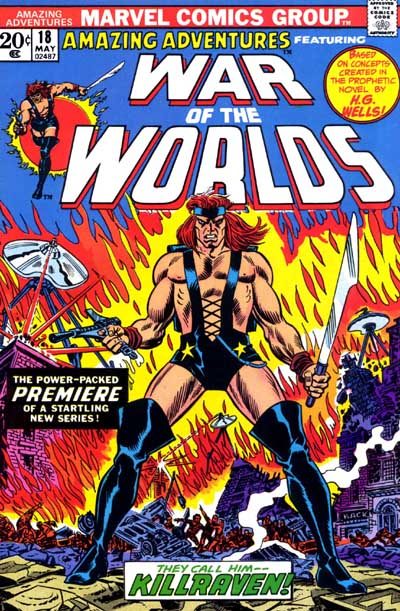 What Is It? Killraven was a pulp fiction mashup story that exists outside of main Marvel continuity. It followed an Earth-born rebel as he strikes out against the Martian-infected Keepers enslaving the remains of the human race.

The Killraven character and story mostly contained in the anthology title Amazing Adventures (1970), which he took over from #18 in May 1973 until the final issue, #39 in November 1976.

Killraven’s story was revisited by Marvel Graphic Novel #7 in 1982 with “Killraven, Warrior of the Worlds: Last Dreams Broken” and in a 2001 on-shot. He’s also made some sporadic appearances in the main Marvel Universe.

Creators: While Killraven was initially created by Roy Thomas, Neal Adams, and Gerry Conway, his run is most associated with author Don McGregor and artist P. Craig Russell, who were the custodians of the character for the majority of his run.

Can you read it right now? Only in original floppies or black and white in Killraven Essentials: War of the Worlds, though you could also read the 2002 retread by Alan Davis. Both are readily available despite being several years out of print. This run is not available on Marvel Unlimited.

Set in the farflung future of 2018 (I know, right!), Killraven assumes that the events of H.G. Wells’ War of the Worlds more or less occurred as written in 1901 only to have the Martians return a century later to achieve their original aim of subjugating humanity.

The titular hero was separated from his family as a boy and trained by the Martians for their own gladiatorial entertainment. The Martians have also compelled some Earthers to become Keepers, assisting with the enslavement of their brethren, while some women have been transformed into Sirens – luring the remaining free men to their dooms. 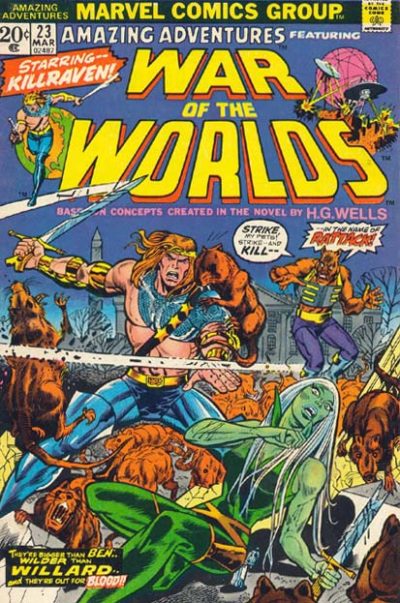 By all accounts, a portion of the Amazing Adventures material is enjoyable pulp. There is a certain subset of 1970s fans who revere this material and aren’t satisfied with the black and white essentials volume that collected it entirely in 2005.

However, with Killraven is only tangentially a part of the main Marvel Universe. His main connection is that the original farflung future Guardians of the Galaxy are from the distinct future of his distant future. He’s also made a handful of appearances in the last 20 years, starting with Kurt Busiek’s Avengers Forever in 1999 with some recent teases by Brian Bendis and James Robinson. There’s been the looming suggestion that the main Marvel continuity might experience some manner of occupation similar to what Killraven rebels again, but it’s hard to imagine Martians posing much threat after recent invasions but the Skrulls, Thanos, and the rest.

Despite that, Killraven is not garnering any cross-media attention (a rumored movie seems to have never reached the script phase), it’s hard to imagine Marvel going to their most high-end format to reproduce the material when it could easily be knocked out in a pair of less-expensive trade paperbacks.

I wrote about this run last year after only a cursory review. This time, I dug a bit deeper and read the first few issues of the run, plus some from the middle.

The earliest material is rough. It’s pulpy and it has its appropriated War of the Worlds framework to rely on, but the issues are middling 70s comics at best. Killraven is bland at best and laughable at worst – a muscle-bound deadly warrior in a barely-there S&M bathing suit whose motivation seems to be simply flinging himself at any Mars-aligned human he can find.

Don F. McGregor quickly takes over with issue #21 and starts to give the book a more defined identity – sending Killraven on a journey beset by increasingly deformed humans who have been mutated by the Martians. The book starts to take on the tone of John Carter of Mars set against a crumbling landscape of American landmarks.

(Marvel would later adapt Carter after this Killraven run ended).

After an assortment of artists, including a brief run by Herb Trimpe, P. Craig Russell takes over with issue #27 and stays with the character until his 1980s graphic novel. Russell is one of the medium’s most-acclaimed creators in the modern day, but these Amazing Adventures comics were some of his first. In the earliest issues, his style is indistinguishable from what came before. Over the course of the next 12 issues, his pencils become more detailed, angular, and fantastical, until you can begin to see hints of his present-day style.

Together, they spin a compelling yarn which elevates Killraven from a singular rebel stalking the streets of former Manhattan to a central figure in a delightfully fleshed out (and surprisingly diverse) band of rebels traveling the ruins of America.

While McGregor and Russell would return to the character to resolve his search for his lost brother in a 1983 graphic novel, they were never able to deliver their intended final chapter of Killraven’s saga. Still, the graphic novel provides as satisfying a resolution as is possible for a hero whose adventures surely continue off the page.

Will we see this omnibus in 2018? No, but we could be fast-approaching the point where it’s covered in Masterworks. 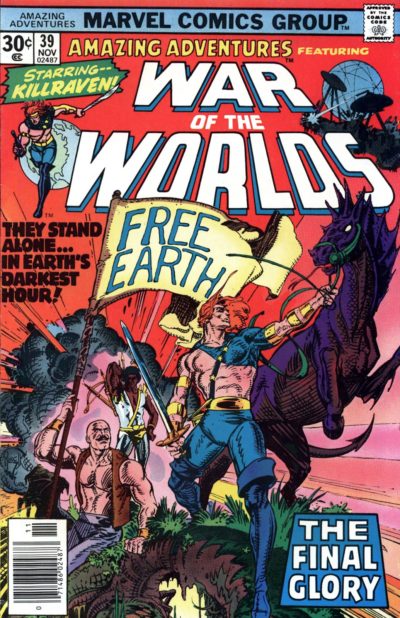 While Killraven would make for a petite omnibus, it’s currently too-big for a single Masterworks volume by three page signatures. Our longest Masterworks volumes so far have been The Champions at 472 pages and Uncanny X-Men, Vol. 10 at 464 pages – and the Killraven Essentials is just a hair above that at 504 pages.

If Champions – which merited a pair of Classic collections – couldn’t merit a pair of Masterworks or an Omnibus, would the obscure Killraven? Probably not, so a single Masterwork likely remains our best bet.

Would I recommend reading it? Not unless you are a major fan of pulp heroes and stories.

If you are someone who loves War of the Worlds and 70s comic adaptions of heroes like Conan and John Carter of Mars, then you are absolutely the target audience of this comic!

If not, you should probably skip it.

That’s not to say it’s not good. Killraven gets progressively more thrilling, but it’s a very specific kind of pulp sci-fi merged with futuristic dystopia. Pair that with the common slow read of a 70s series and I just don’t see it appealing to a wide array of readers.

Its placement on the survey is definitely down to nostalgia paired with the feeling it’s simply time to address this run in color, on way or another.