Heading into my life as a parent, one of my initial hard and fast rules was “no children’s music.”

It was a rule I held to pretty firmly, not only for my own sanity, but because there is no such thing as “children’s music” or “adult’s music.” There’s just music. Yes, you can scientifically construct a tune that might more easily earworm its way into the brain of a child compared to the typical pop song, but if you can get a kid to like The Beatles, Michael Jackson, and Sia, why bother with anything that’s watered down?

As a part of my rule, I tend to be avoidant of most kid-oriented musical movies and TV shows, because those songs are some super earwormy little fuckers. I watched what parents went through with “Let It Go,” and that wasn’t happening in my house.

(We also have a, “no song more than once in a day unless we are learning to play it” rule in place to protect us in those situations.) 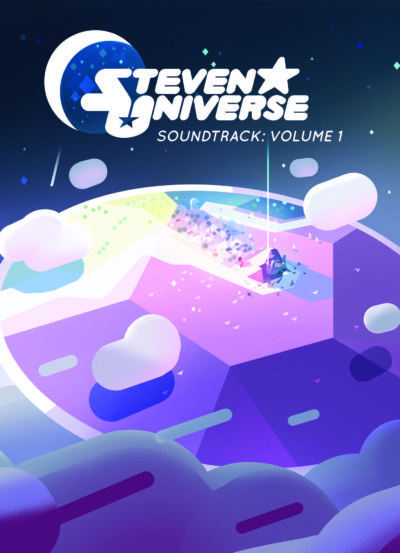 Steven Universe is a cartoon about a matriarchal society of planet-conquering inorganic gems whose bodies are hard light projections and who have a tendency to break out into genre-bending song and what happens when one of them rebels against her home world and also gives up her body in order to have a half-human/half-gem, ukulele-wielding, sensitive pre-teen son named Steven with her solo rock songwriter boyfriend Greg.

Not only does that sound scientifically constructed for me, but it also came with heavy recommendations from sources I trust as an appropriate show that doesn’t rely on the crutch of crude jokes and traditional gender roles, and teaches positive lessons about sexual orientation and consent.

(At least half of the prominent couples on the show are same gender pairings; when couples feel especially connected and cooperative they can fuse to form a more powerful gem form.)

Thus, when EV6 turned three and gained the rights to watch TV once a week, Steven Universe was amongst the first things we screened for her.

She was instantly addicted – to the show, to its charming and dynamic characters, and to its mind-blowingly awesome songs.

Seriously: these songs. They carry the story like the best songs in musical theatre but with all the heft of the catchiest pop song, usually in two minutes or less (since each episode has an 11 minute run time).

They thwarted my rule about children’s music, because they just aren’t. And, they skate around my rule against repeats because EV6 wanted to learn to play them herself on piano and ukulele! Like, I wrote out the chords to the theme song to match stickers on her piano and she taught herself how to sight-read the song so she could hear it whenever she wanted.

Last week the show finally released an official soundtrack album so we didn’t all have to rely on YouTube rips and occasionally SoundCloud posts for our fix. Of course, we had all the songs already, but having them perfectly edited and with an optimized frequency range got us listening all over again!

I debated mightily on which song to share with you to turn you on to the wonder of Steve Universe, and while I was tempted by one of the many brief pop songs in the show’s oeuvre, I went with what EV6 would play for you first and chose “It’s Over, Isn’t It?”

(Note that this is very much a “Musical Theatre” type song, which is its character Pearl’s style. For a Wonders-like retro pastiche, try “Steven and the Stevens,” for acoustic songwriter try “Be Wherever You Are,” and for indie pop try “Tower of Mistakes.” I’d link to Garnet’s “Stronger Than You,” but it’s a heavy spoiler for the first season!)

Seriously: are these the sorts of lyrics you expect to hear in most children’s cartoons (especially as sung by a female character)?

I was fine when you came
And we fought like it was all some silly game
Over her, who she’d choose
After all those years I never thought I’d lose

What can you even say to that?

As with the vast majority of songs from the show, “It’s Over, Isn’t It?” was co-written by creator Rebecca Sugar, who has a real knack for inserting inclusive intersectionality into a show where most of the characters aren’t even human beings. (Here she is singing and playing the torch song “What’s the Use of Feeling Blue?” on ukulele, though on the show it’s sung by Patti Lupone(!)). 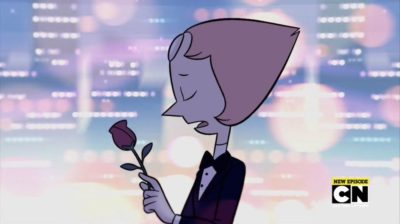 It helps that the song’s singer, Pearl, is voiced by Deedee Magno Hall – a former Miss Saigon lead who it turns out that E has actually seen on Broadway(!). (Here’s Magno Hall singing it live, shattering your heart.)

Pearl is the Steven Universe character who most often speaks directly to my soul as the high anxiety, extremely organized gem who insists that life can adhere to a pre-ordained plan and a strict schedule, which is why this song represents such a transformative moment for her.

Who am I now in this world without her?
Petty and dull with the nerve to doubt her
What does it matter? It’s already done
Now I’ve got to be there for her son

Now as an addict of this and dozens of other songs from the show, I have to pause and ask myself: is this so different from loving “Let It Go”? This song is even a decent analog for the Oscar-winning Frozen mega-hit – also laced with themes of personal growth and female empowerment.

The difference, for me, is the length and scope of Steven Universe. “It’s Over, Isn’t It” is just one of 37 songs on this first soundtrack volume, and it’s not the only one that speaks to the essence of Pearl.

Or maybe I’m just trying to justify why I love this damn song so much.

But, I think we can agree: it isn’t only children’s music.