You are here: Home / consume / Crushing On / Updated: The Definitive Guide to Marvel’s Hercules 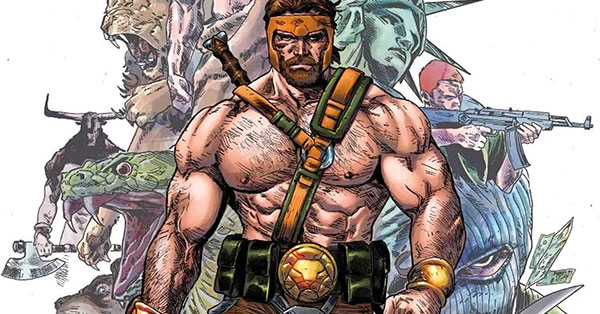 Who is Marvel’s Hercules?

Hercules was originally introduced into the Marvel Universe as an Olympian foil to Thor and his Asgardian mythology. In his first appearance, Thor has unwittingly fallen through the Bifrost from Jotunheim to Olympus, where he and Hercules come to blows over who ought to be the first to cross a stone bridge. 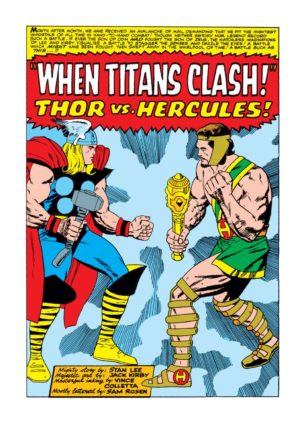 (If we’re being truly comprehensive, first he was introduced in Avengers #10 as a historical figure summoned to the present by Immortus, but that appearance had no continuity to his next appearance in Journey Into Mystery Annual 1 and was later retconned to not have been the Hercules we know.)

When we next see Hercules, it’s because Zeus has cast him out of Olympus under the guise of giving him a quest on Earth, though it’s really because all he does is fight. The next time, the hot-headed Hercules has left Olympus without Zeus’s permission and fallen under the spell of the Enchantress – and when Zeus catches wind he banishes his son to Earth. Without a home on Earth, he is adopted by the Avengers like a stray cat.

Do you sense a trend developing? Hercules is written as the good-time god, always virtuous but not a terrific house-guest due to his constantly drinking, picking fights, and chasing skirts.

Later, after a run of adventures with Thor, he moves to Los Angeles to found the short-lived Champions. The first time Hercules got to star in his own title, it wasn’t ever our Hercules! Bob Layton’s classic trio 1980s Hercules stories (and a 2010 sequel) star a 24th Century version of the god who was – once again – exiled from Olympus!

In the early 90s, Hercules settled in for a lengthy official run with the Avengers in their “leather jacket” era, and this is where many modern fans fell in love with this hot-headed hero with a big heart. After Onslaught caused The Avengers to disappear from the Marvel Universe he became a hero adrift – appearing briefly in Heroes for Hire as well as his first in-continuity mini-series in 1997. He’s similar on the out after Avengers Disassembled in 2005.

Hercules would finally get his starring turn as a result of a battle with an old foe – Hulk! In 2007, he took over Hulk’s title in the wake of World War Hulk, becoming The Incredible Hercules! Finally, Hercules got a long-running title to himself. Written by Greg Pak and Fred Van Lente, the title explored themes of what godhood means in a modern world.

For more on that run, read its Marvel’s Most-Wanted Omnibus post from earlier this year! 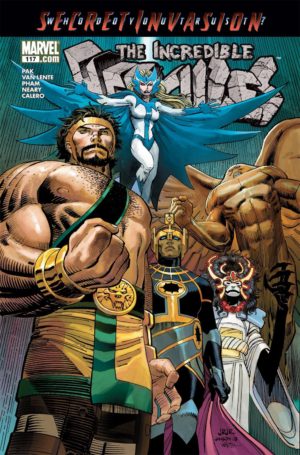 Where to Start Reading Marvel’s Hercules

Finding a place to start with Hercules isn’t so simple, since he spent over forty years in team titles before receiving his first ongoing comic. Here’s a few thoughts.

The Champions was the first extended run of Hercules as an anchoring cast member. You can grab the entire series in a single Marvel Masterworks volume.

For a fresh, bite-sized portion of Hercules, pick up his short-lived All-New, All-Different Marvel series from 2016 in  Hercules, Vol. 1: Still Going Strong. While the run was self-contained, if you love it you can still follow Hercules into his Civil War II mini-series and then back to The Avengers.

Finally, if you want a standalone story of Hercules alongside another familiar face, try Wolverine/Hercules: Myths, Monsters & Mutants, and era-spanning mini-series that focuses on a series of retconned misadventures of the god and Marvel’s most-famous mutant.

Hercules has had his highest profile in 2017 as in any other recent year since his ongoing series was running.

He started the year in the main Avengers squad in the wake of Civil War II, appearing in the first eight issues of their relaunched ongoing series. He also appeared throughout Marvel’s Monsters Unleashed event! Afterwards, he co-starred in an arc of Doctor Strange and the Sorcerers Supreme (2016) and appeared with a reunited Champions in Iceman for Marvel Legacy!

Before his 2007 ongoing, Hercules scored his second in-continuity mini-series in 2005 with the formidable creative team of Frank Tieri and Mark Texeira.

I never see this book get mentioned by fans, perhaps because it’s a bit slow-moving. However, it’s where we see Hercules’s sorrow and rage in the wake of Avengers Disassembled and how that somehow leads to him getting his own reality show. You can read it in The New Labors of Hercules or on Marvel Unlimited.

With Hercules headlining the vast majority of his series in the “collected era” where Marvel reprints every comic in a collected edition, he’s got one of the best standings of all of Marvel’s heroes!

Hercules is 96% collected! That’s better than any other headlining Marvel hero from pre-2005 aside from Deadpool!

To be fair, that doesn’t count Hercules as a member of team books. While The Champions brief stint is 100% collected, the leather jacket era of Avengers is notably under-reprinted as we await several more Epic Collections to fill in its gaps.

Will we ever get to 100% on Hercules? His four late-90s issues wouldn’t exactly make a high-selling TPB on their own, although I wouldn’t put it past Marvel to issue them that way along with his appearance from Marvel Team-Up Vol. 2 (1997).

A much more-likely scenario is that they are used to fill in some other short-lived Hercules series. Honestly, Marvel passed up the perfect opportunity to get them collected alongside one of his pair of 2016 series. Now we’ll have to wait another few years for another chance.

Are you ready to read some Hercules, whether that’s in the Silver Age or the modern day? Head to the Hercules guide to get started!