You are here: Home / consume / Crushing On / Music Monday: “The Wrong Year” – The Decemberists

I can fall in love with a song because it means something specific to me.

Other times I fall in love with a song because of something it only implies – because I can find so many different meanings inside of it.

“The Wrong Year” by The Decemberists is one of the latter category. Every time I hear it I want to cry, and I’m not sure if they are tears of joy, of grief, of relief, or some other emotion entirely. There’s some unquenchable ache it creates in my chest that feels like only my tears can fill or expel it (maybe both).

The Decemberists write hyper-literate chamber-pop that’s also hyper-specific – and, often, historical. For a long time I assumed there was something obvious I loved about the lyrics to this song that I simply didn’t recollect between listens.

Diving more deeply into it, there’s very little to the lyrics. Each verse is about some ungraspable fey person – first “Grey Jane,” then an unnamed “he” who is “struck down as a summerchild,” and finally the author themselves – sleeping like a ghost all winter.

Yes, “Grey Jean” could be referring to Lady Jane Grey, the teenaged so-called “Nine Days’ Queen” of England who was swiftly dethroned and not too long after beheaded. And, in fact, “struck down as a summerchild” could even refer to her brief rule in July of 1553.

However, that’s not what has drawn me in all of this time. I didn’t know about any of it until this very moment!

So, what is it that makes “The Wrong Year” make me ache deeply in my soul every time I hear it.

First, the chord progression. It couldn’t be simpler or more common: G D(7sus4) Em Cmaj7. At first when I hear them played with this jaunty rhythm it evokes the verses of Ben Folds’ “Rockin’ The Suburbs.” However, after a few listens just now I realized that these are also the chords to something much more familiar: the first line of “Don’t Stop Believin'” raised a minor third!

Just a small town girl, living in a lonely world

Grey Jane was a riverchild, born down by the river wild

Whoa! Right from the start, “The Wrong Year” is evoking one of the most well-known, often-covered singalongs in rock history. Well, that explains some of the implied meaning, for sure! (Also, they later check the actual melody of “lonely world” on “run a mile” in the second verse.)

As I continued to dig into the lyrics, I noticed a peculiar echo between the first verse and the final verse. In the first, an obstinate Lady Grey says: “Hey what I wanna be, nobody’s gonna intervene.” In the final verse, the singer flips this phrase and its meaning: 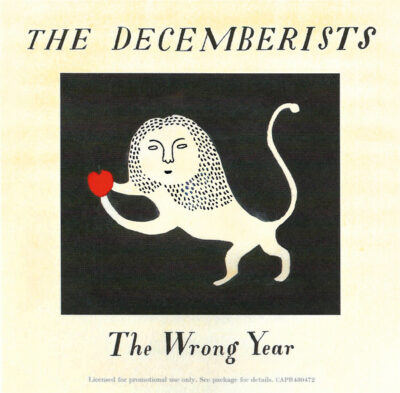 They’re essentially saying that if you sing them the song of a fleeting ghost (or some Metal, because death metal bands love naming themselves Eidolon), they’ll hibernate the winter long – and while they sleep they will be a perfect, unchangeable version of themselves. Or, does it actually mean, “only I can be” – that nothing about the world can be allowed to change while they slumber?

This brings me to the contradiction in the chorus. Each chorus starts with the phrase, “And s/he wants you, but you won’t do, and it won’t leave you alone,” flipping the gender each time. Everyone wants our sleepy Rip Van Winkle of a narrator (or, is it two specific people who want them), but something is holding them back.

Then, we reach the title, and this is the bit that makes me cry.

The song mentions a “river wild” and a “summerchild,” but there is no obvious narrative connection to rainfall. I don’t think there is meant to be. I take it more as a metaphor – it never rains when you need to be watered, and then when it rains it pours.

Why does everyone want you when you don’t want to be wanted? Why can’t you just rest, and let the world pause and wait for you while you do?

Sometimes it won’t leave you alone and you just need to change your plans.

Sometimes when everyone wants it it feels like “when it rains it pours,” and you have to say yes in that moment before the next drought.

Or maybe it really is about Lady Jane Grey. Who knows.