You are here: Home / consume / comic books / Updated: Guide to The Sandman Universe 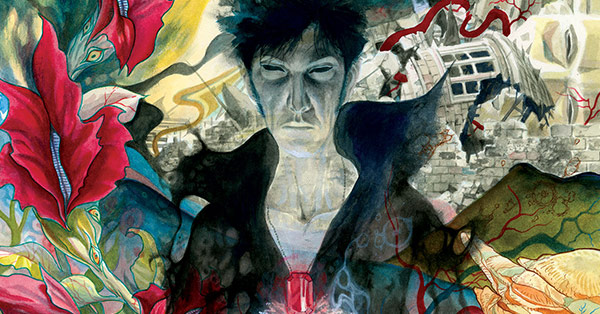 If you’re looking to pick up the entire original run of Sandman for a binge-read after your binge-watch, you currently have five different physical format choices – all summarized below! For full collection information for each book and plenty of additional information, see the full guide.

Various supporting Sandman short story releases from 1995 to 2009 (all by Gaiman) are collected in The Absolute Sandman, Volume Five

Then, The Sandman Omnibus, Vol. 3 collects various supporting Sandman releases by Gaiman from 1995 to 2009, as well as the award-winning pair of Death mini-series by Gaiman and his 2013 return to the universe with The Sandman: Overture.

Deluxe Hardcover Editions – The same dimensions as the omnibus line, but in slimmer, easier-to-handle volumes. Note that this set incorporates the 1995-2009 material into its final volume alongside the final issues of the original Sandman series, so don’t skip it!

Paperback re-collections – A 2022 line of paperbacks that closely mirror the omnibus material. While the fifth volume isn’t out yet, you don’t have to worry about that – all of the 75-issue series is contained in the first four books.

30th Anniversary Paperbacks by story arc – The 10 volumes of the core 75 issues of Sandman have collecting been in print for nearly 30 years, which means there are many printings and editions of them! Note that Volume 6 collects several issues from both before and after Volume 5.

If you want the bonus stories contained in the fifth books of the editions from above, you’ll also want to pick up: