Danny Rand – The Iron Fist – was introduced in 1974 as a whitewashing of the kung fu craze. Marvel already had a secret agent Bruce Lee clone in Shangi-Chi starring in Master of Kung Fu and a corresponding magazine in Deadly Hands of Kung Fu, but it was ultimately a genre magazine – but Marvel was all about super heroes, and Iron Fist fit the bill perfectly. 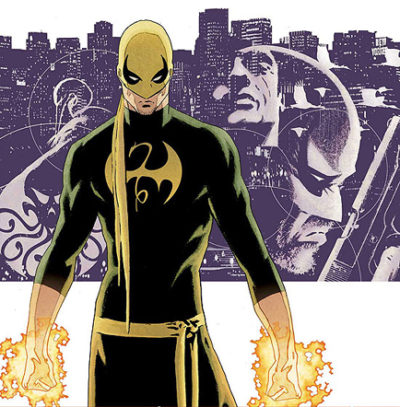 After a short-lived solo series introducing his powers and mythology, Rand joined Luke Cage in to form a duo of unlikely urban heroes for hire in Power Man and Iron Fist in 1978.

The juxtaposition of the wealthy Rand and the streetwise Cage made for memorable interactions, even if some of their adventures were forgettable. The result is one of Marvel’s most-remarkable and enduring partnerships.

That series ended in 1985 and Danny Rand stayed gone for an impressive seven years before resurfacing in the 90s for a brief stint.

It wasn’t until the 2000s, and the onset of creators who grew up with those first two 1970s volumes, that Iron Fist became a major headlining hero in his own right, joining the Avengers and starring in an Eisner-Award-winning solo title.

Since then, Iron Fist has become a much more regular feature of Marvel’s publishing line up, with a string of shorter-lived series in Marvel Now and All-New All-Different Marvel – including a return of Power Man and Iron Fist.

Iron Fist was introduced by Roy Thomas in anthology title Marvel Premiere in 1974, but it was Chris Claremont and John Byrne who took him from the tail-end of that run into his own cult hit title in 1975 and from there to co-star in Power Man – which was quickly revamped to headline both heroes. 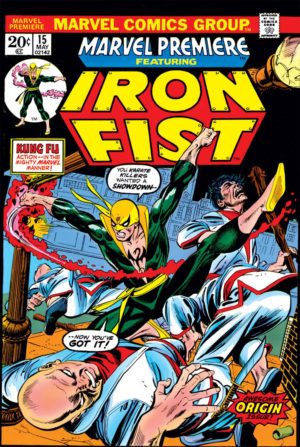 Marvel consistently treats this material – Marvel Premiere, Iron Fist, and the pair of Team-Up issues – as the “official” story. In reality, Iron Fist actually had a few more appearances in this introductory period, which are covered in full below.

as an Epic and Complete Collection – affordable color paperbacks

as collected by single issue or story, including guest appearances…

Iron Fist made half a dozen additional key appearances in the late 70s. The Kung Fu materials were written by Claremont, but specifically not reprinted due to rights issues with some of the other characters in book – Fu Manchu, in particular.

(I’ll never understand how Marvel Team-Up #31 isn’t included, since and fits cleanly before his own series. I think it has to do with it not being by his primary writers at the time. Same for Marvel Two-In-One.)

Marvel Premiere #17-19: Not collected, except as above. 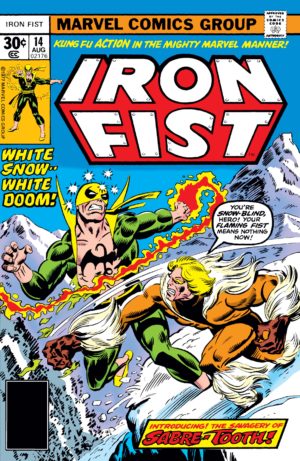 Marvel Premiere #20-25: Not collected, except as above.

Iron Fist #5-10: In Masterworks, Epic, and Essential, above.

Maybe also The Spectacular Spider-Man (1976) #9? Iron Fist may appear solely in flashback there; I need to check.

Iron Fist #11-15: In Masterworks, Epic, and Essential, above. Notably, #14 is the debut of Sabretooth and is collected in Marvel Visionaries: Chris Claremont. Unrelated to that, #15 continues almost directly from Uncanny X-Men #107-108.

Marvel Team-Up #63-64: A one-two punch of team-ups with Iron Fist and Daughters of the Dragon. See Spider-Man for collection information.

Launched by Chris Claremont, this duo title was swiftly taken over by Mary Jo Duffy for four years before Denny O’Neil took the reigns (fresh from Batman and Green Lantern), and then a young Kurt Busiek before devolving into a hodge-podge of guest writers including Christopher Priest as James Owsley. Iron Fist brought an injection of fans and supporting characters to the flagging Luke Cage, and Cage’s status as the first long-running African American superhero was only enhanced by (and inextricably linked to) his association with the blue-blooded Danny Rand. 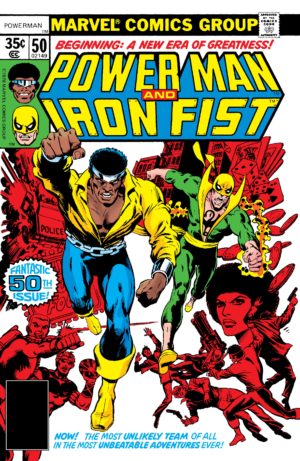 The series was cancelled in 1986 amidst a wave of consolidation of low-selling 70s holdover titles, including The Defenders. Danny Rand was left seemingly dead, but that wasn’t such a big deal – even Luke Cage was effectively put into mothballs until the 1990s.

as collected by single issue or story, including guest appearances… 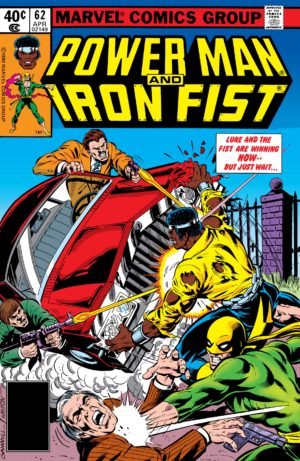 #73: Not collected. A crossover with ROM #22-23, which has not been reprinted due to rights issues.

Danny Rand does not appear in the final five issues of this series.

Iron Fist made his return after half-a-decade of presumed death, thanks to one of his original curators, John Byrne – now the writer/artist of Namor! 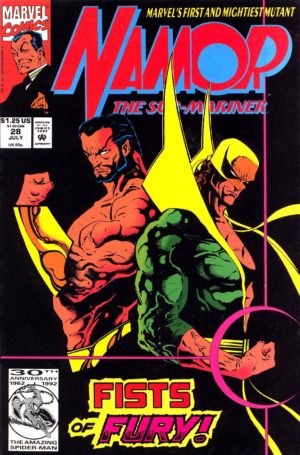 (ISBN 0871356171)
This is reprinted in Silver Surfer: Parable. It’s unclear to me if Iron Fist’s appearance here is in continuity.

Daredevil: Cage Match: A one-shot flashback story. Collected with New Avengers: Luke Cage (2010). This may have occurred prior to this volume rather than after it.

Iron Fist finally merited his own title again, anchoring a new iteration of Heroes for Hire written by John Ostrander. It was launched in Marvel’s wave of new titles in the wake of their Heroes Reborn debacle, but lasted just two years. In the middle of that series, Iron Fist returned for another mini-series penned by Dan Jurgens. Afterwards, he was back to guest star status for a couple of years. 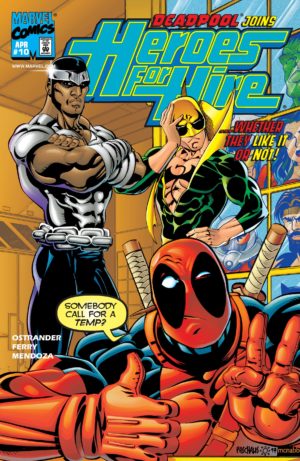 Iron Fist, Vol. 3 #1-3: Iron Fist: The Return of K’un Lun (full contents above)
This occurs after Heroes for Hire #13 and prior to the Siege of Wundagore crossover.

Iron Fist does not appear in Heroes for Hire #14. 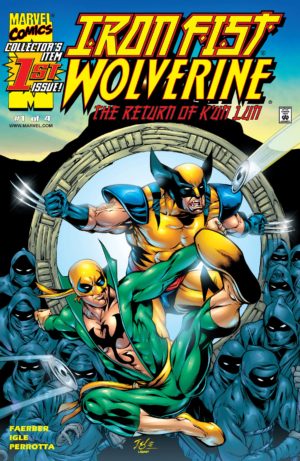 Marvel Knights Double-Shot #4: Collected with The Return of K’un Lun, above.

In this period Iron Fist appears semi-regularly in both New Avengers and Daredevil, eventually earns his own ongoing title for the first time since the 1970s!

Secret War: See Marvel Universe Events. This story occurs both in present and flashback, and it happens concurrently with Pulse #6-9, collected in The Pulse, Vol. 2 and Jessica Jones – The Pulse: The Complete Collection

Pulse #14: Unclear of his appearance here, but it’s also in The Complete Collection, above. 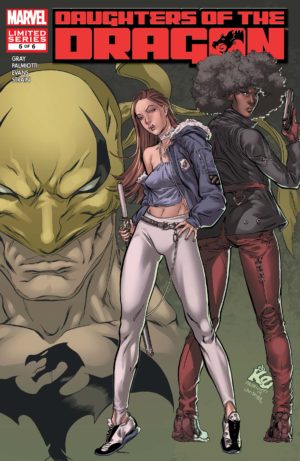 White Tiger #1-6: White Tiger: A Hero’s Compulsion
A featured character. Does not appear in #4

In this period, Iron Fist makes some appearances masquerading as Daredevil.

Thing #8: The Thing: Idol of Millions
This is a brief appearance in a poker game (really)

Over 20 years after his first series, Iron Fist finally returned to his own ongoing title. Written in tandem by superstars Ed Brubaker and Matt Fraction, the first half of this run would on to win the Eisner Award for Ed Brubaker as Best Writer in 2008. In this period, Danny Rand also became an Avenger for the first time! His appearances in this era are tightly coordinated between the two books (as well as a number of guest appearances). 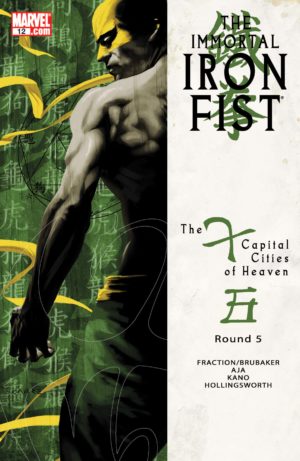 #17-27: Not collected in oversize format

as a pair of comprehensive Complete Collections…

by single issue or storyline (including guest appearances)… 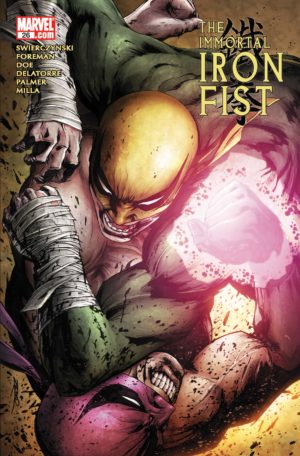 #17-20: Vol. 4: The Mortal Iron Fist
Also collects Orson Randall & The Death Queen of California, which does not star Danny Rand. Available in hardcover.

Immortal Weapons (2009) #1-5
Placement varies, but this is where this series of one-shots end chronologically. There is a Danny Rand story that runs as a backup in every issue; it is also collected here. 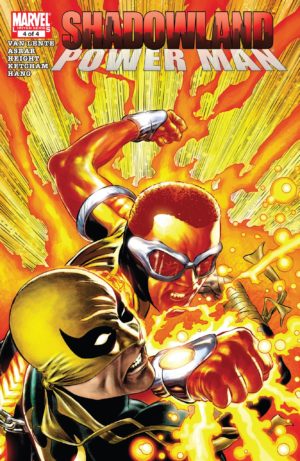 Power Man and Iron Fist (2011) #1-5: Power Man & Iron Fist: The Comedy of Death
The Power Man in question here is the new one introduced in Shadowland.

Heroes for Hire (2011) #3-5: Iron Fist appears in the first arc of this series. Not an exact placement. Collected in Heroes for Hire by Abnett & Lanning: The Complete Collection 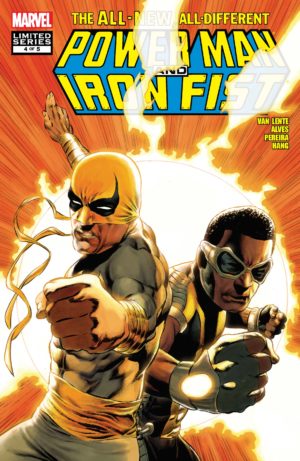 Then: Incredible Hulks (2010) Annual 01, Iron Man: Iron Age (Iron Fist is a featured player in this series, though it is primarily a past incarnation up until the final moments.) 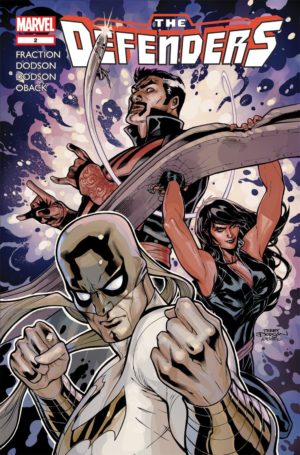 Marvel Point One (2012) #1
Acts as an intro story to Defenders. Collected with Defenders, below.

Fear Itself: The Fearless (2011) #10-11
See Marvel Universe Events: Fear Itself. Iron Fist appears, but this is not essential to his continuity.

Defenders (2012) #7-12: See Defenders. Because of the nature of this story (it ultimately retcons itself), it’s best understood as happening all in one chunk. 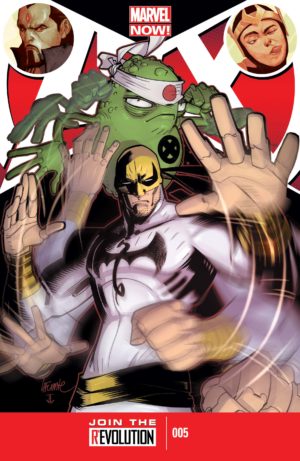 Danny Rand’s presence in early Marvel Now – from the end of Avengers vs. X-Men to Infinity – is scant. Aside from a pair of funny Deadpool and Superior Foes issues, he must be off-page managing the Rand Corporation.

Age of Ultron: See Marvel Universe Events. Iron Fist appears in #2-3, but this is an alternate timeline which is ultimate rebooted back to the standard Marvel universe.

Mighty Avengers #6-7: See Mighty Avengers
This is likely Iron Fist’s first post-Infinity appearance. Iron Fist teams up with Luke Cage’s group in this pair of issues. It’s a significant appearance with speaking parts and a fight, though it isn’t crucial to his own continuity.

Axis: See Marvel Universe Events. Iron Fist appears in a fight in #1 & 3 as well as in Magneto #11 (briefly, as part of Axis) 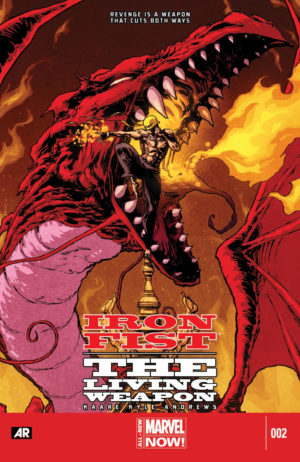 This series was created entirety by Kaare Andrews – script, linework, and colors! The only duty he didn’t handle with lettering.

Author David Walker reassembled this classic team in a dense, amusing book with art from Sanford Greene, a street-level focus, and a major 80s vibe.

This Kaare Andrews mini-series was previously announced as a physical ongoing but was delayed and released digitally in favor of the Brisson series. It features a new generation of Iron Fist – a young girl. Due to being set in New York, it like fits in continuity prior to the first arc of the 2017 series (and, also, it was likely written before that story was pitched). 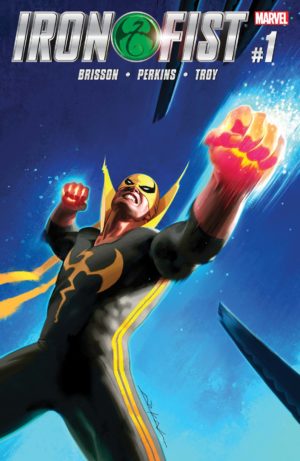 Writer Ed Brisson took Iron Fist’s title back to the vibe of his Immortal series with him entering a mystical martial arts tournament to get back his kung fu mojo. Then, in Marvel Legacy, the series renumbered for a redux of his classic confrontation with Sabretooth (who first appeared in Iron Fist’s 70s series).

In this period, Danny also appears throughout Brian Bendis’s Defenders.

All three of the non-Daredevil Marvel Netflix heroes were relaunched into digital-first series in the back half of 2018.

Didn’t find what you were looking for?
Check Amazon for Marvel’s newest Iron Fist titles.