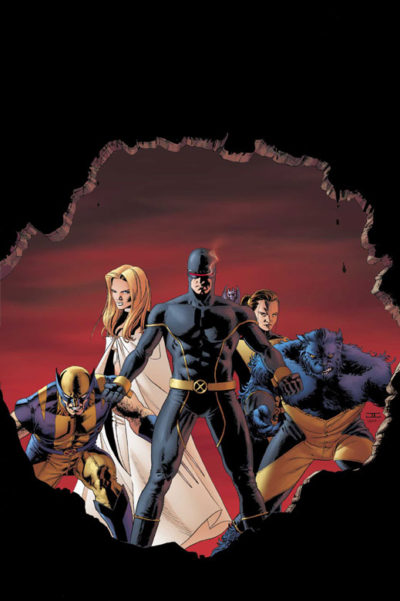 Begins in July 2004 concurrent with the X-Men Reloaded event – parallel to Uncanny X-Men #444, X-Men #157, and the launches of Excalibur (vol. 3) and New X-Men: Academy X. In the Marvel Universe, House of M occurs sometime after issue #6.

The collection of the first six-issue arc, “Gifted,” is one of the finest X-Men graphic novels you can buy – Whedon’s plotting and writing of the entire team is pitch perfect. After that, the plot across the subsequent three storylines is slightly uneven, but the writing and art continue to be astonishing. The entire run bears an impressive narrative arc. [Marvel Unlimited] 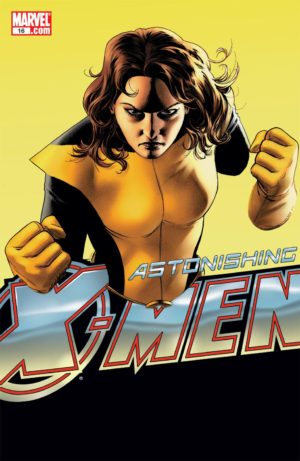 as a single, oversized hardcover volume…

A number mini-series occur in and around this series using the same cast. They are: 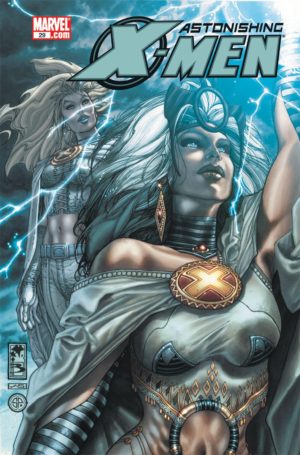 Begins in September 2008 shortly after the Messiah Complex crossover, parallel to Uncanny X-Men #500 and X-Men Legacy #214, in the midst of the Manifest Destiny arc. It’s easy to track its placement, since it introduces Storm to the San Francisco headquarters.

In the Marvel Universe, it begins just ahead of Secret Invasion. Also, SWORD: No Time to Breathe takes place around the same time.

Warren Ellis’s science-fiction flavored run subtracts Shadowcat and Colossus from the team and adds Storm and newbie Armor (a supporting character in Whedon’s run). Ellis is known for acid-tongued characters and alternate universes, and he brings both to bear on the X-Men – relishing in both Emma’s nastiness and Beast’s know-it-all-ness. SWORD”s Agent Brand appears throughout.

Artist Simone Bianchi’s pencils on the Ghost Box arc are perhaps the most stunning, classically-influenced art to ever appear in an X-Men regular series, while Exogenetic‘s penciler Phil Jimenez is a fan favorite. However, most fans did not enjoy this book at the time of its release. [Marvel Unlimited] [Ghost Boxes on Marvel Unlimited]

This pair of stories begins in April 2011 sometime after the Second Coming crossover, likely placed after Uncanny X-Men #534, and Generation Hope #4, but prior to X-Men Legacy #245, New Mutants #22, and Uncanny X-Force #5.

In the Marvel Universe, it begins before Fear Itself.

After a half-year hiatus, Astonishing returned with Wolverine: Origins helmer Daniel Way alternating scripting duties with Christos Gage, who moves on to script X-Men Legacy in the wake of Schism. [Marvel Unlimited]

Begins in November 2011, parallel to other Regenesis titles launching out of Schism.

The angst of Schism split the Cyclops and Wolverine twosome that typically headlined this title. What to do? An initial arc by Greg Pak followed Cyclops directly out of Schism. [Marvel Unlimited]

Marjorie Liu takes over scripting duties and transfers the book from post-Schism Team Cyclops to Team Wolverine, with a cast of Wolverine, Gambit, Iceman, Northstar, Karma, and Cecilia Reyes … versus a revamped Marauders!

The general theme of this run was that it followed number of the professors of the Jean Grey School on their less-academic adventures as a companion to Wolverine and the X-Men (2011). Liu continued to helm the title with the same cast through its cancellation, focusing at least one story on each member along the way. Her cast was Wolverine, Celia Reyes, Gambit, Iceman, Karma, Northstar, and Warbird. [Marvel Unlimited] [Annual on Marvel Unlimited] [Extermination on Marvel Unlimited] 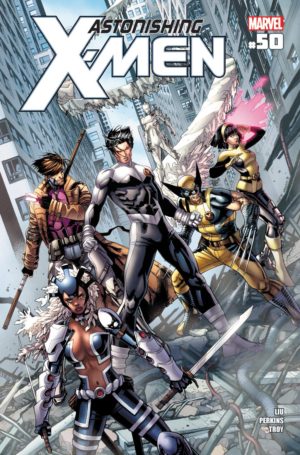 After the end of this series: Wolverine continues to appear everywhere; Gambit leaves the core X-Men for All-New X-Factor; Iceman and Northstar are primarily team members in the subsequent run of Amazing X-Men, below. Celia Reyes next appears in the first few issues of Nightcrawler (2014) (which continues from Amazing X-Men‘s first arc) and then in X-Men (2013) #18-22. Karma makes a few minor appearances and then for seemingly no reason is one of “The Utopians” in All-New X-Men (2013) #40-41 and Uncanny X-Men #600.

A new series launched out of Jason Aaron’s Wolverine and The X-Men in the fall of 2013 featuring Wolverine, Beast, Storm, Northstar, Iceman, and Firestar hunting for their potentially-revived friend Nightcrawler. [Marvel Unlimited] [Annual on Marvel Unlimited]

After this volume, a new Nightcrawler series is launched while he continues to star here, collected in Vol. 1: Homecoming and Vol. 2: Reborn.

Christopher Yost’s run in this title features a very “classic” Claremontian line-up anchored by Storm and Nightcrawler and stories that are rooted in Claremont-era themes, including Wendigo and Juggernaut. He was joined for some of the run by his longtime creative partner Craig Kyle. Kathryn Immonen wrote issue #7.

An all-new, all-star Astonishing X-Men launched in 2017 with author Charles Soule  at the helm alongside several A-list artists. This single mega-arc starring Psylocke, Archangel, Rogue, Gambit, Old Man Logan, Mystique, Bishop, and Fantomex as they grappled with Claremont-era threats of the Shadow King and Proteus – plus, a resurrected Charles Xavier?! [Marvel Unlimited]

Didn’t find what you were looking for?
Check Amazon for Marvel’s newest Astonishing X-Men or Amazing X-Men titles.