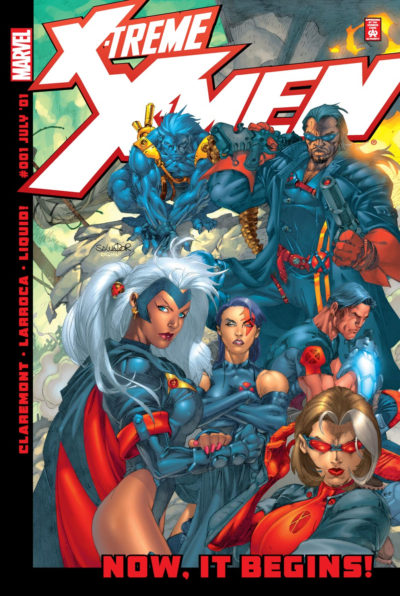 The X-Men line received a major shake-up to its status quo in 2001. To make way for Grant Morrison’s tightly-focused cast in New X-Men (2001), Marvel spun off some of its most beloved X-characters into a third flagship X-title: X-Treme X-Men, penned by veteran scribe Chris Claremont and launched with artist Salvador Larroca.

This new team boasted heavy-hitters and fan-favorites Storm, Rogue, Psylocke, Bishop, along with newer charaxters Thunderbird, and Sage, It would later feature Cannonball, Gambit, and Shadowcat. Beast, and Wolverine also appeared, though they were shared with Morrison.

It’s important to note that, at its launch, X-Treme X-Men was the only X-team that featured a consistently fantastical, heroic theme. Morrison’s New X-Men trended more cerebral and sci-fi, while Austen took Uncanny X-Men to a more soapy, relationship-focused feel. Meanwhile, X-Force relaunched as the tongue-in-cheek X-Statix. At the time, X-Treme was alone in carrying the banner of a classic X-Men feel.

It was also the only comic book at the time to feature Storm, Rogue, or Bishop, who barely even make a guest appearance elsewhere during this run.

X-Treme ran for the full length of Morrison’s run on New X-Men. Afterwards, Morrison’s slimmer, scholastically-focused team was in turn spun off into Astonishing X-Men, penned by Buffy The Vampire Slayer creator Joss Whedon. Astonishing borrowed Kitty Pryde from this book, with the main two X-Men titles absorbing most of the other characters.

The title went unused for almost a decade before being revived in 2012 for an unlikely purpose – a reality-hopping Dazzler vehicle penned by Greg Pak that might have been better off known as Exiles. Then, in 2022, Chris Claremont returned for a revival.

#25-46: Not yet announced for this format. Since the first omnibus already collected X-Men Unlimited (1993), this may omit Mekanix entirely. 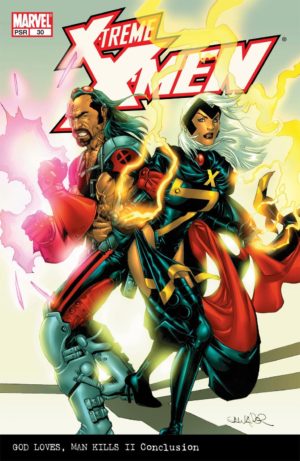 Annual 1 fits here after issue #9 but is collected much later in the final volume. 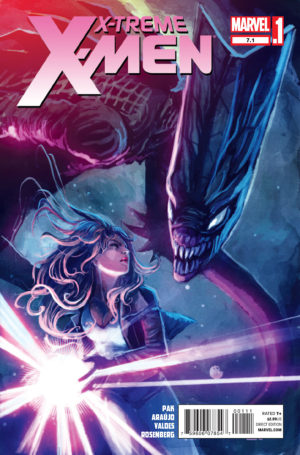 This is an alternate-reality series that could’ve easily been titled “Exiles” headlined by a single regular-reality Marvel character: Dazzler.

This run wwas a cult hit that never caught on with a larger fan community and which was up against line-wide changes due to Avengers vs. X-Men introducing Marvel Now..

(This title spinning out off Astonishing is ironic, since the initial volume of X-Treme was cancelled to make way for the debut of Astonishing.)

#1-5: Vol. 1: Xavier Must Die (20xx paperback, ISBN 978-0785165644 / digital)
Dazzler leaps to an alternate reality doomed by a conglomeration of evil alternate Xaviers, with a team of alternates including White Queen, a pre-teen Nightcrawler, and a gold-plated Wolverine!

Original X-Treme creators Chris Claremont and Salvador Larroca reunite for a story set just after their original run on the title.

Didn’t find what you were looking for?
Check Amazon for Marvel’s newest X-Treme X-Men titles.