The Eternals are one of the defining creations of Jack Kirby’s mid-1970s return to Marvel Comics, though relatively few modern readers have had the chance to appreciate them prior to their film debut in 2021 compared to his other cosmic creations like The Inhumans and DC’s The New Gods.

The core cast of roughly a dozen named Eternals (though there are as many as 100) have tended to stay confined to their own handful of series during over 45 years of their publishing history, with just a handful of guest appearances or exceptions. 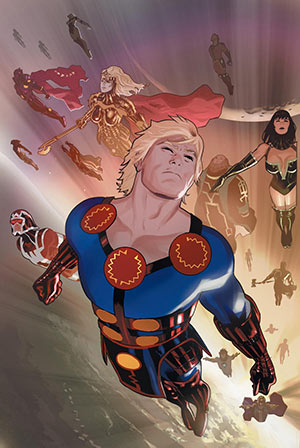 The main exception is Sersi, who join the cast of the Avengers in the 1990s for over fifty issues, and is well-known to heroes like Captain America and Iron Man.

(A secondary exception is Gilgamesh, who was an Avenger for just a handful of issues before Sersi replaced him. A more remote connection are descendants of Titan, among them Thanos and Starfox, who are Eternals by relation but are not part of the primary cast of The Eternals comic.)

In Marvel continuity, the Eternals are a long-lived splinter-race of humanity created by visiting Celestials during Earth’s pre-history – alongside their sibling race, The Deviants. The Eternals function as both heralds-of and caretakers-for the Celestials on Earth. They often interact with or inspire humanity’s mythology – the Eternal Ikaris, in some tellings, is the father of the mythological Icarus. They also police themselves, abiding by the rule of the group and sharing knowledge by forming a collective “Uni-Mind.”

Jack Kirby had a massive, cosmic story to tell with his cast of Eternals starting in 1976, though many of the plots of his series were left dangling after its cancellation in 1978, to be resumed in 1979 in Thor’s “Celestial Saga.” Shortly afterward, Mark Gruenwald and Peter Gillis significantly expanded their origins via a series of in-continuity back-ups in What If – explaining their earliest Celestial origins and forging a connection between the Eternals and fellow Kirby creations The Inhumans.

Past that, the Eternals have appeared largely only when their series is revived, or when a character is explaining Celestial history. They return in 1985 for a 12-issue revival by Gillis and Walt Simonson, in 1991 for an OGN, in 2000 for a one-shot trying to give them some X-Men shine by connecting them to Apocalypse, and again in a heavyweight 2006 revival by Neil Gaiman (and continued in a 2008 series). Even Sersi returned to relative obscurity after her run on Avengers.

In 2018, Jason Aaron’s opening arc of Avengers (2018) saw the team facing off against a fleet of invading Celestials, and the entire earth- bound Eternal race was collateral damage – he killed them all, mostly off-panel! However, this would prove to be a set-up for Kieron Gillen to relaunch the title with a clean slate at the start of 2021 as part of the run-up to the Eternals film. END_OF_DOCUMENT_TOKEN_TO_BE_REPLACED