When I left off last week we had a video game theme, an instruction booklet introduction, and a visual concept of 8-bit goodness – all for my best friend and bandmate Gina’s highly unusual bachelorette party. 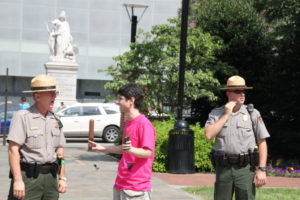 Here I am shown negotiating something – possibly our surrender – with two park rangers while our live action video game was in progress. No, I am not threatening them with a baton, that’s just a trick of perspective. Still, they seemed to find me rather intimidating. Notice how the one on the left has his hand near his utility belt, while the one on the right is making an exceedingly obvious attempt to reach for his radio receiver.

As for what we’d be actually be doing during our human video game, that was another story entirely. A story with no plot or structure. Or mini-bosses.

We had to start somewhere. Since Gina is a chemist by day, we decided she should be challenged to put her chemistry knowledge to the test. I originally wanted to her to conduct a chemistry demonstration in the middle of the street with everyday groceries, but we eventually decided that might look a bit too much like an act of terrorism during 4th of July weekend within a few blocks of The Liberty Bell.

(At the time there were legitimate questions being asked, like “Do we need a permit to do that?” and “Can you even legally buy that in Pennsylvania?” We fully anticipated losing one or more attendees to some mix of boredom, drunkenness, heatstroke, or tasing by park rangers.)

With a mind to not being detained under the Patriot Act, Kelly devised an insane chemistry challenge to fulfill our needs that we could all understand as laypeople… and, possibly as drunks, depending on how the day was going at that point.

Gina would explain one of her daily chemical reactions using the entire group to represent various molecules. Except, rather than steer us around like pieces in a giant chess board, she would demonstrate the power of UV chemistry via dance routine she would have to choreograph on the spot. 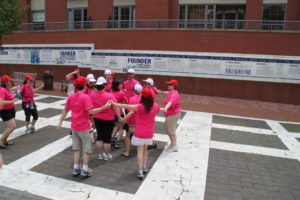 The Chemistry Dance, in action.

And this was only one of nearly two dozen potential challenges we had devised. As if scripting the challenges wasn’t hard enough, we also had to plot them across the map of Philly!

Now perhaps you are beginning to the understand the sheer depth of our insanity.

Whether you are planning a live action video game or a standard scavenger hunt, one of the hardest parts is figuring out all of the locations and how long it will take to get from one to the next.

Here’s what I did: 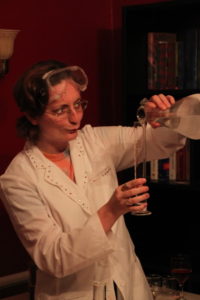 Note that this is not happening in the middle of the intersection of 2nd and Market Streets, as originally planned. Also note Gina’s custom-bedazzled labcoat.

We wanted six hours of activities, but just the walking added up to over ten hours. That didn’t even count what we’d doat each location.

While Kelly crossed off the details (t-shirt, chemistry glassware) and Mikki designed more stencils, I filled in the agenda for the day. The more I penned our challenges, the more I realized Gina would only be interacting with a few of her 20+ guests at a time. What would the other dozen or more do while Gina was having madcap adventure?

Unfortunately, time was just about up – Kelly was boarding a plane bound for America, and Mikki was packing up her apartment for a big move before flying to Philly for the party.

Yes, that meant I was left all by my insane lonesome for three whole days to finalize the party plan. Tune in next time for the story of my nude psychotic break out on our side patio. (Yes, it is totally relevant to the party. Essential, even.)