You are here: Home / Personal / topics / thoughts / Lost, not found. (or: stupidity tax) (or: NEARLY headless)

Over the last thirty days I have racked up nearly $500 in lost stuff.

Let’s mull that over, shall we. Do you have something you want really, really badly that you could buy with an extra $500? I bet it’s a pretty major thing. A laptop? An amplifier? A new suit? A gas grill?

Do you know what I really, really want? THE STUFF I LOST. Five hundred dollars worth of it –  $500 which I now have to re-spend on things I already owned a perfectly good copy of as a sort of tax on my own stupidity. 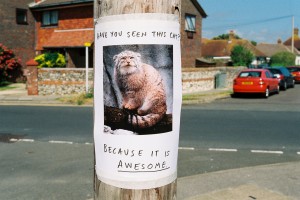 I wasn't sure what image to lead with for a "lost and found" theme, so E suggested the Awesome Cat. I know that he isn't lost, but this is possibly my favorite photo in the long and storied history of the internet. At least now when I look back on this stupidity I can smile about it ... not because I'm at peace or anything like that. No, just because of the awesome cat.

I’d also call it a tax on my carelessness, but it’s not quite that.

Allow me to explain. The highest value items were the spare key and alarm fob to our car. They’re going to cost over half of the $500 to replace. Now, you might say, “Peter, keys are easy to lose. We’ve all done it once or twice. You carry car keys everywhere. Don’t beat yourself up about it.”

Great. Okay. Sure. Tell me this: how many times have you lost your keys while standing in the middle of a field doing nothing with nothing but grass as far as the eye can see in any given direction.

Yeah, I’m way better at losing things than you are.

Last month I was the first car to park in the field at Gina’s wedding. I turned off the ignition and shut the car door. I took five steps away from the car so I could take a photograph to commemorate the first time I had ever driven on grass other than when I pull out of my driveway sideways across the lawn.

I took three more steps away from the car, and realized I hadn’t locked it. I reached into my pocket for my keychain.

It was not there. 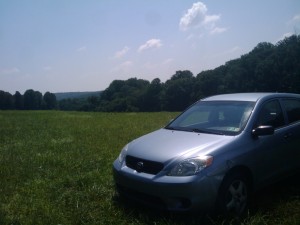 My car in a field, about five seconds after losing my keys and about thirty seconds before realizing my keys were lost. What are the odds of that? It's like solving a murder because it was caught on camera by Google Street View.

Then I proceeded to search both the car and the field on my hands and knees in 90 degree heat, tracing carefully plotted forensic grids across the ground to make sure I was covering every inch.

After a while I became paranoid that the keychain was stuck in my clothes somewhere, so I stripped down to my underwear, pawed through my clothing, and continued my search in the nearly-nude.

About an hour later we added two more people to the search party. They were fully clothed.

In eight steps I had made the key – attached to a massive, shiny keychain the size of a healthy piece of pepperoni – completely disappear. Our working theory was that some sort of vole emerged from the ground, noticed my glimmering keychain, and absconded with it to their burrow to show the family.

More to the point: I lost my keys in clear sight in broad daylight.

It’s embarrassing, but I’ve resigned myself to it – not because I lose things all the time (I don’t) or because I’m good at letting go (god knows that’s not true). No – instead, it’s because I am relentlessly deliberate and routine, and losing stuff is something that I occasionally have to do when I’m moving on with my life.

One month into driving and I have no routine connected to the car. I don’t know where to put the things in my hands when I get in. I don’t have a habit of putting my keys in my pocket when I get out. I’m not used to having two sets of keys.

Thus, the lost car keys. And cell phone battery. And house keys. And bus pass. The list goes on, but every element connects back to the car in one way or another. The car that equals running errands, seeing friends, going to concerts on rainy nights, accepting more gigs, and a hundred other good things.

I just have to pay a stupidity tax to go along with all the rewards. At least when I think of it that way the $500 bothers me slightly less.