Tonight we had a sweaty Filmstar rehearsal.

Sweat is one of those unglamorous parts of rock star life that I feel is not sufficiently advertised by bands to aspiring musicians and parlor-bound Rock Band addicts, along with writing lead sheets and receiving constant electric shocks to the face from your microphone if your instrument isn’t properly grounded.

(Seriously, do you want full, pouty, Jagger lips? Just play a shoddily grounded bass and sing right up on the mic.)

No matter what sort of sweater you are under typical life conditions, when you are flinging a sixteen pound bass around while also doing some form of the frug and singing backup vocals, you are going to develop more than a healthy sheen.

Add to that the heat generated by your equipment or a low-hanging stage light focused on your neck and rocking out for an hour is roughly equivalent to spending the same amount of time in a sauna. Which makes 2.5hr rehearsals a marathon of perspiration. 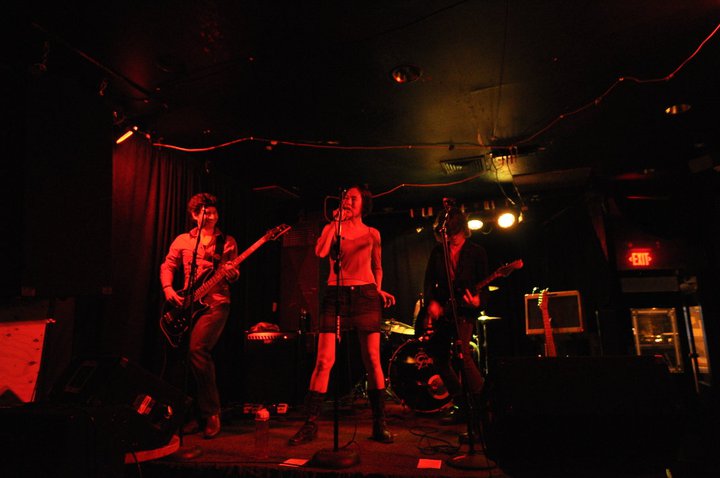 I think I was experiencing all four aspects of band sweat at this gig. What you can't see in this photo is the stage light positioned about eight inches from my face.

We’ve all seen bands sweat, right? So what am I bitching about? Here are some aspects of band-sweat you might not have previously considered:

Sweaty vision. Sweat can sting in your eyes to begin with, but if you are a perfectly coifed rocker you are gradually sweating all of your chic hair product into your eyes, causing a stinging temporary blindness.

This usually takes three or four songs to get underway, which means you’ll be struck blind just as your set is heating up, typically during the most intense and difficult-to-play section of a song.

Which leads us to…

Sweaty hands. Either your hands sweat, or you get sweat (and dissolved hair product) on them trying to restore your vision. Shockingly, neither holding on to a plastic pick nor plucking bass strings in a regular rhythm is made easier.

Sweat accessories. You need them, and I don’t mean Olivia Newton John style headbands. When planning your killer stage outfit, some part of it has to double as a hand-towel – and, let me tell you, leather pants do not fit the bill. Now I understand why so many singers wrap boas and scarves around their microphone stands.

Of course, then there’s the problem of…

Sweaty clothes. Once your set is over you want to reap the rewards of being a rock star – namely, adoring fans, and possibly a cold beer. Except, you are soaked through to the skin as if you had been standing under a fire hydrant, and with the rush of performance and the baking stage lights behind you your body is suddenly cold and clammy.

(My father has for years pointed this out to me about strippers; I did not realize he was telling me a parable that would assist in my rock star life. Sorry, dad.)

Allow me to enlighten you to the fact that fans are way less interested in fawning over you and hugging you when your entire ensemble is a massive sweat stain. And, despite what your Almost Famous dream fantasy looks like, until you are past local levels of fame most green rooms do not include fully appointed bathrooms with showers so you can make a quick change. I’ve played exactly one gig that has had one.

There you have it: my band sweat exposé. Maybe next I’ll address the practical issues of selecting attractive footwear that does not hinder your pedal-stomping.

For all my rocker friends: what other unexposed pitfalls of band life should the aspiring rocker be aware of before turning up to 11?

Previous Post: « Lost, not found. (or: stupidity tax) (or: NEARLY headless)
Next Post: so many songs, so little time »