Birds of Prey is a team that’s crossed over to many other forms of Bat media. It’s a largely all-female team of costumed crime-fighters centered in DC’s major urban meccas.

It’s not so hard to grasp, and generally one of my favorite types of comic to read. Yet, I managed to be completely ignorant of the team aside from one key facet – that Barbara Gordon acted as team captain from her wheelchair as Oracle.

With the reboot sweeping Gordon’s Oracle off the playing field, I wasn’t so sure of what to expect from Birds of Prey. Add to that writer Duane Swierczynski, who I think of as the kind of guy who writes stoic male characters, and an DC-exclusive artist I’ve never heard of.

The result? Not a clue of what to expect from the cast or script of this book. 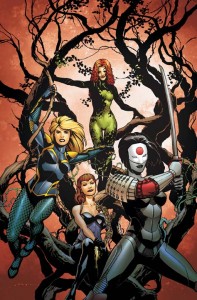 In a Line: “Can’t help but like her. She’s a natural born hellraiser.”

#140char Review: Birds of Prey #1 is a pitch-perfect debut for the lady mercs. Duane scripts each well & crafts puzzles within puzzles. Want the next ish now

Birds of Prey #1 is one of the best first issues out from DC this month, and that’s coming from a reader who has never heard of or seen these characters ever before reading. Afterwards? Totally hooked. 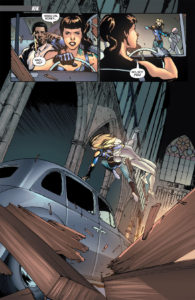 I was concerned that Duane Swierczynski, who I think of as a hard-bitten guy-with-gun writer, wouldn’t have the hang of a slightly funnier female-driven book. I was entirely incorrect. He keeps the dialog brisk and to-the-point but still gets the tone of his pair of deadly heroines just right.

He also makes perfect use of intercut flashbacks, which artist Jesus Saiz’s cannily matches frame for frame to their lead-in from the present day. In an action-filled issue that’s decidedly NOT an origin story he still managed to clue me in as a totally clueless new reader.

As for Saiz, his pencils are ace. From the first panel of a dilapidated church seen through driving rain I knew we were in for something special. I’m simply in love with his art. Backgrounds are detailed with sharp details and textures, but characters don’t try too hard to be photo-real. Nei Ruffino’s colors help each character pop off of the background of the page. There are only a couple of instances where I couldn’t quite follow action from one panel to the next, and a few panels where Starling looks rushed.

Black Canary seems like the coolest gal friend to have as well as the most efficient non-lethal merc you can hire. Maybe that makes her a bit of a Mary Sue, but I didn’t get the sense she’s infallible. In fact, though she’s capable throughout, a mid-issue cliffhanger as well as the issue’s climax hinge pretty exclusively on her lack of foresight.

Meanwhile, Starling comes off as a deadpan suicide girl, tatted up and quick to act in a crisis. A Batgirl cameo was a thrill for me as a new reader, and seemed like a knowing reference to some post incarnation of the title.

It only took one issue for Swierczynski and Saiz to find the right formula for this action-packed, adventurous book. If they keep it up Birds of Prey will be one of the premiere titles of DC’s relaunch.