In my opinion, the entire endeavor of writing for and reading comic books is about continuity. The comics that appeal to me the most are the ones with the longest continuity. That’s part of why I love X-Men and avoid DC – X-Men refers back to 1963, while DC restarts or erases whenever they hit a tangle.

Given my predilection for continuity, I’m almost universally disinterested in alternate timelines and possible futures. What’s the point if it has nothing to do with the other thousands of comics I’ve read?

Legion of Superheroes presents an interesting wrinkle to my rule. Yes, it takes place in the 31st Century with increasinly less frequent interactions with Superman and Superboy, but it has been around for hundreds of issues – it has its own far-flung future continuity. However, in a wrinkle to the wrinkle, since Legion’s 1958 introduction this is the fifth version of the team.

Sounds way too convoluted. But, more importantly, is it any good? 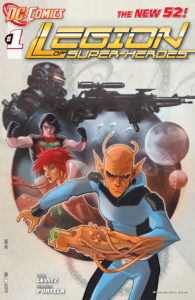 In a Line: “You sure this isn’t a training mission?”

Legion of Superheroes #1 plunges forward with careless glee, its only concession to new readers being a set of attractively designed introductory captions explaining the homeworlds and powers of the many, many heroes we meet.

The story on the ground doesn’t need too much more introduction. Chameleon Boy leads a team to infiltrate a militarized planet that broke contact with the outside world. Levitz offhandedly gives the idea that all Legionnaires are well-publicized, which helps establish quite a few facts about the intergalactic heroes and the culture they operate in. Otherwise, their infiltration mission is fairly rote until they hit an obstacle at the end of the issue.

It’s the B-plot back at the ranch that drags. We meet a slew of people tossing around references that make no sense at all. While introducing tons of heroes on panel helps set the scope of the book and probably delights longtime readers, it was overload for me – especially because many of them barely had a line.

It’s all par for the course for a book with a big cast steeped in continuity, but Levitz makes the critical mistake of tying all of our emotional beats to knowing what the characters are talking about. We aren’t given any reason to care about anyone just based on their action in the present.

From there I quickly turned off to this issue. It’s a rare case where I would have rather watched brawl with less running commentary, as Francis Portela’s art is bold and sure throughout. He makes this set of strangers out to be iconic heroes, but I can’t find a reason to care about any of them. (I was slightly put off by a close-to-verbatim ripoff of X-Men’s Thunderbird/Warpath, but who knows – maybe this costume came first?)

It’s a shame Legion verges on unintelligible for new readers like me, because I think there is a lot to enjoy in this re-debut. This issue could have presented more of a primer on what the Legion is and the purpose they serve in the 31st Century. Without that, I doubt it will attract many new fans.