Green Lanterns are like Jedi. They are a select few, each wielding an ancient force to defend the universe from evil, fear, greed, and tyranny.

The thing about Jedi is that they were always much cooler when they were rare. In the Original Trilogy we had two good ones and two bad ones – that’s it! When they were plentiful in the prequels they were much less cool – though Team Sith retained their awesomeness by only fielding a handful of dark mirrors of the Jedi.

I suspect the same holds true for Green Lanterns. First we had one on Earth. Then they were a galaxy-wide operation, each responsible for a sector. Now we’ve got multiple lanterns in each sector, multiple colors of lanterns, and gangs of lanterns trolling through space looking for a fight.

And we have this book. Green Latern Corps. Last week established my distaste for the Green Lantern mythology not once but twice, as well as my dislike of the other book out from writer Peter J. Tomasi. This book features both, plus scads and scads of Lanterns. 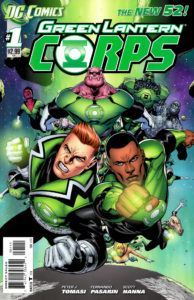 In a Line: “I can’t unplug – I can’t relax – I’m always waiting for the next mission or something to go wrong so I can power up.”

Green Lantern Corps #1 is everything a debut issue of a new team should be. It has a disturbingly bloody mystery, a glimpse at the home life of our heroes, and the conception of their new mission as a team. 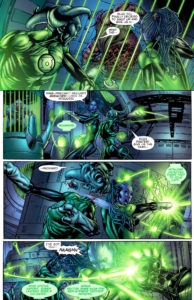 Yet, it’s not the shock of the bloody spectacle that makes the book a delight. My faith in writer Peter Tomasi was low after Batman and Robin, but if anything it seems like he’s true to the voices of characters and Robin is simply annoying. Here he perfectly captures the different brands of angst of my first and least favorite Earth Green Lanterns, respectively, and finds a way for them to mesh together perfectly.

A sad sack Guy Gardner in a baseball cap is a treasure, sitting alone in a planetarium using his ring like a digital watch, later acquiescing to showing a waiting room of dudes something green. His bulbous-nosed face seems to be fixed in a permanent state of half-smirk, half-frown. A self-righteous John Stewart seems more handsome and muscular than in the past.

A bit of reflection between the pair of them while seated on an orbiting satellite is one of the best hero-on-hero dialog scenes so far in the relaunch – because both characters are humans first and heroes second. 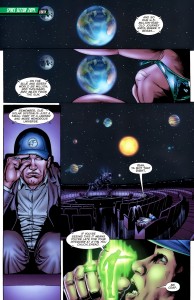 Speaking of space, I’m hugely excited for more space art from Fernando Pasarin. He draws a GL Sector House like Firefly meets Star Wars – dilapidated high tech, and not too alien (even though there are aliens in it). The two alien GL’s fight with an unseen foe is like a light saber duel in slow motion, each panel a glistening freeze frame of cinematic action.

Guy and John’s entrance into Oa is both funny and epic, and the splash page of their space-faring team (and subsequent witty ground-level shot) had me staring for minutes. An act of silent genocide against a race of chubby blue otter people has an eerie gravitas that harkens back to Dark Phoenix wiping out a planet of peaceful broccoli-headed people.

That’s all surely abetted by inker Scott Hanner & Gabe Elateb’s colors, both of which are fantastic throughout the issue. This is a phenomenally matched art team that can make an interview as a high school gym teacher look riveting. Literally – they did that.

It’s really a pity that the interior team didn’t handle the cover, which is just average.

I never found myself stopping to ask questions about the mechanics of being a Lantern like I did in the other two Lantern books so far. Not only does Tomasi neatly answer a lot of questions in dialog, but his plot is so kinetic and so adroitly illustrated that the reader has no reason to pause and reflect on the missing pieces.

This is a fun, thrilling, gorgeous issue with nary a flaw, and it left me excited to read a second one – even if it’s about my least favorite line of heroes in the DC Universe. I suggest you give it a shot.