Busty woman have always been a part of the draw of comics, but in the late 80s and 80s it went completely overboard.

Already attractive female characters has their breast sizes increased to the point of physical impossibility as their waists collapsed and costumes became increasingly skin-tight (or, just skin). This trend was perpetrated hugely by Image’s superstar artists, so of course when they launched their own line of books they featured a bevy of those scantily dressed females.

The problem (beyond the obvious objectification) is that when female characters are babes from the concept stage, their origin stories become intertwined with their curves. Voodoo was originally conceived as a regular girl with the super gift of seeing aliens in human bodies … who happened to be an exotic dancer. Her tight outfits, slick figure, and crazy boots were part of her identity.

When a female hero was conceived as a vapid sex symbol, does she really merit their own titles? Like anything else, it has to do with good writing. DC’s relaunch already pilfered a large part of Voodoo’s prior origin – they handed her ability to see aliens walking around in human skin to the rebooted Grifter.

Art previews of the issue revealed many scenes set in a strip club. Did scribe Ron Marz find any other aspects of Voodoo to write about, or are we getting a book about a stripper who … strips? 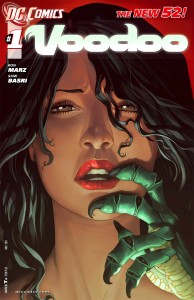 In a Line: “We don’t need to be doing it from a ringside seat.”

Voodoo #1 is an embarrassing waste of an interesting character concept and an artist who is clearly capable of so much more than nudie pinup pics. 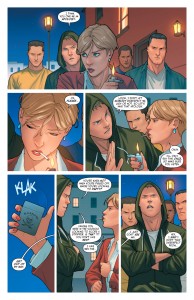 The blame rests mostly on writer Ron Marz’s shoulders. Yes, we get that part-alien Voodoo is a stripper because men can’t resist her and she wants to study their behavior. That doesn’t mean we need to spend an entire issue in a strip club with panels so revealing that I was terrified of reading this comic on the bus.

I choose not to implicate artist Sam Basri too much – he’s just drawing what he’s told. There are only so many non-lascivious ways you can draw a piece of script that must have read, “Voodoo crawls forward on the stage, her bosom practically escaping her skimpy bikini top.” Although, I guess when the background of a panel has a man waving a dollar bill at the ass of a woman hanging from a stripper pole that’s mostly the artist’s prerogative – so I suppose he’s complicit.

When Basri gets a break from drawing cheesecake, his clothed figures are really super – they have the illustrated-from-life effect of the art of Buffy without looking traced from photo references.

There is a story beneath the grossness here, and it’s potentially interesting. A pair of secret agents have been tapped to keep an eye on the clearly otherworldly Voodoo, but one of them is a little impatient to get to the bottom of her mystery.

Unfortunately, the getting to the bottom takes the literal form of a pages long lapdance.

That’s the entire problem with this issue. You can set a story in a strip club without it being disgusting and exploitative. There are panels here that never needed to be seen, even with the script staying entirely intact.

I can’t call this terrible, because of Masri’s engaging artwork and the interesting core concept of Voodoo as a character. I’ll probably check back in for a second issue based solely on that and hope that Marz and Basri have cleaned up their act, but based on this introduction I don’t have a lot of hope for their take on Voodoo.