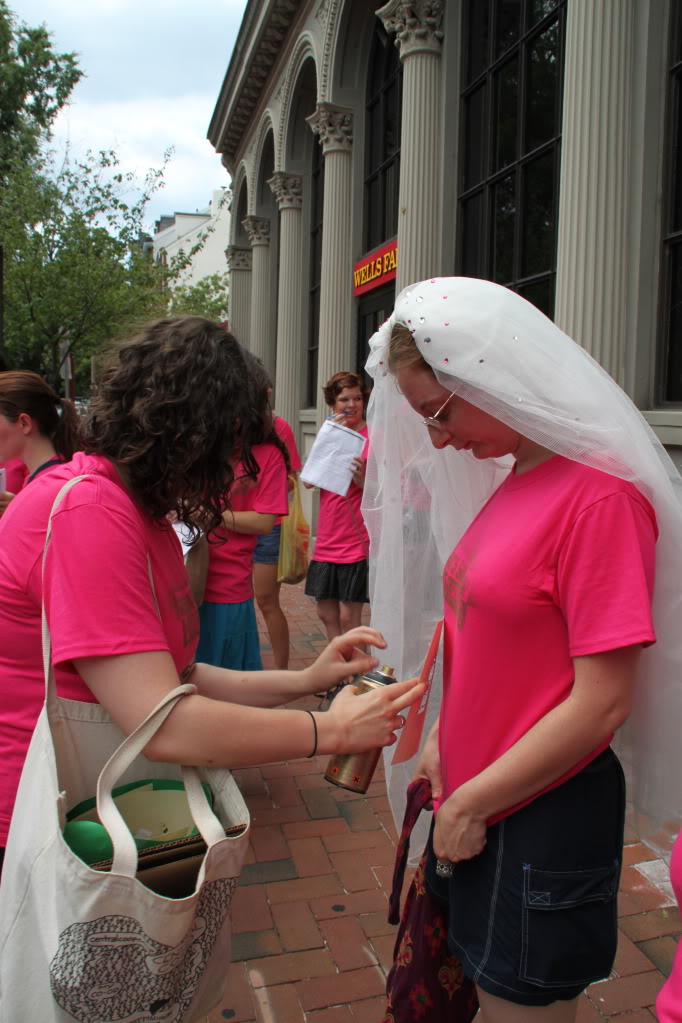 Actually, it wasn’t the day that arrived, but the day before, which brought with it fellow bridal party member Kelly and her partner Gudrun. They pulled up to my house on a beautiful sunny day to put the finishing touches on Gina’s party.

Kelly brought two suitcases into my house – one with her traveling gear, and one packed with supplies for the party. There were her insane 8-bit pins, special puff-painted hats for the chemistry dance, and more. She had even made a lovely fluffy white veil for Gina to wear at the beginning of the day, when we would lure her into a false sense of complacency that her bridal party would be quite normal and not an insane reality show crossed with The Legend of Zelda.

As Kelly finished unpacking, two curious items emerged from her suitcase. One was a headband with a lightning bolt affixed to it. The other was a yet-to-be-assembled hat bearing two feathered wings.

“I know we talked about making Gina wear silly things,” Kelly confessed, “and I started thinking about all the power-ups Mario collects. I thought we could give her these to replace the veil.”

I nodded, gears spinning inside of my brain.

I’m not sure that Kelly knows me well enough to see the crazy emerging in my eyes when I come up with a complicated new idea to make something harder, but I think E spotted it from across the room.

“…you know how Gina has to defeat a “boss encounter” at the end of every stage in the city?”

“Yes!” Kelly exclaimed, making clear the special brand of insanity she shares with both Gina and I, “and she’ll get special powers! The hat with wings will give her flight!” 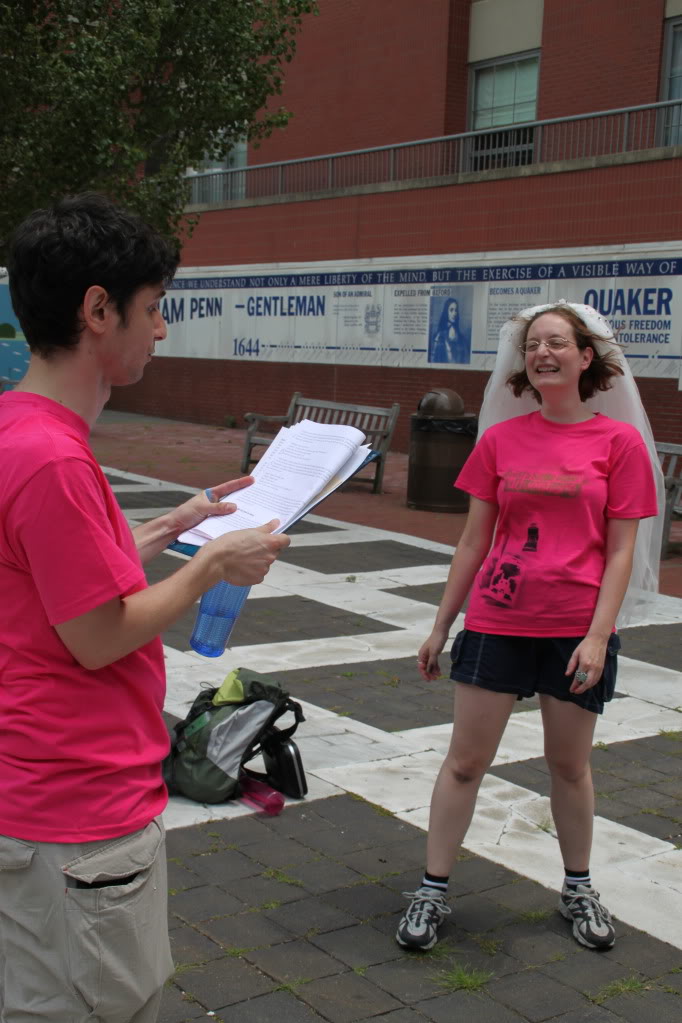 I wield the exceptionally large Game Master version of the instruction book to explain the final encounter of the first stage of Gina’s Adventure.

“Yeah, me neither. Well, do you at least have enough ridiculous pieces of armor for every stage?”

Kelly inventoried her items. The fluffy veil. The winged hat. The lightning bolt headband. A labcoat, to be bedazzled.

“We’re only short one,” Kelly reported, “plus I want to make her a sort of punk rock veil to wear at the end of the day.”

Both of our gears now spinning, we headed out to take Gudrun on a tour of suburban shopping meccas in order to gather the final elements of the adventure: tulle for a punk veil, a massive roll of paper to construct banners, and one more piece of bridal armor. Oh, and beer.

When we found a purple tulle and tiny black flowers for the punk veil plus a fuzzy rainbow boa at Joanne Fabrics it all clicked in my head. When we returned to the house I left Kelly downstairs to craft and ran up to my office to draft the instruction booklet…

STAGE I – Shubin House
Gina begins her adventure in the training stage of the Shubin House, armed only with her existing powers of rock and chemistry. She must use her time in this safe territory to fortify herself for the adventure by collecting the members of her Adventure Party, donning her initial pieces of her special suit of Chemist By Day, Rock Star By Night, and Almost Bride Bridal Armor, and packing her satchel full of rations.

Gina starts the game with $4 and no experience points. 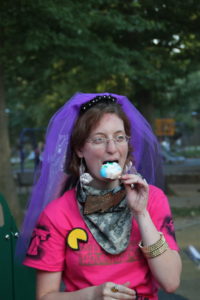 Gina modelling her high-level punk veil as well as several other pieces of Bridal Armor, and many magical runes.

Yes, did I mention Gina had to pay for all in-game expenses exclusively with money earned during the game, all of which would be supplied in $2 bills? Oh, plus, the armor…

Adventurer’s Tunic
Level Required: 1
Gina and all of her Adventure Party begin the game equipped with a standard Adventurer’s Tunic. At first the Tunic seems to offer little protection, but inscribing it with a series of magical runes will help to increase its defensive powers.

Kelly came up to check on me and I read her my handiwork. She endorsed it, and so we continued our respective crafting and drafting.

Eventually, Kelly and Gudrun left around 10pm, after helping me nail down a few final challenges and cutting up a mounted photo of Gina’s fiance into 120 pieces as the reward tokens for our photo scavenger hunt.

Now I just needed to lock down the edits to the instruction book, create a player-version without my game-master cues, and print a master list of the periodic-table of scavenger hunt clues. Oh, and pack.

That all took until about 5am. It was finally the day – Gina’s Bachelorette adventure would start in eight hours!

Oh my god, why was I awake?

Finally, what you’ve been waiting for – the next installment will describe the actual gameplay of Gina’s live action video game bachelorette party adventure!