It was our third time through “Don’t Stop Believin'” when I really did start believing Arcati Crisis could be an actual wedding band.

Rewind ten days. Onstage at a near-empty Tin Angel, my voice felt as though it was going to snap in half. I sang “Better” and “Bucket Seat” robotically, relying on muscle memory to find some in-tune notes in the pain.

Fast forward four days. Gina was too sick to rehearse, so Jake and I gathered in my attic to stare down a list of twenty new songs we had exactly four weeks to learn. It seemed daunting. 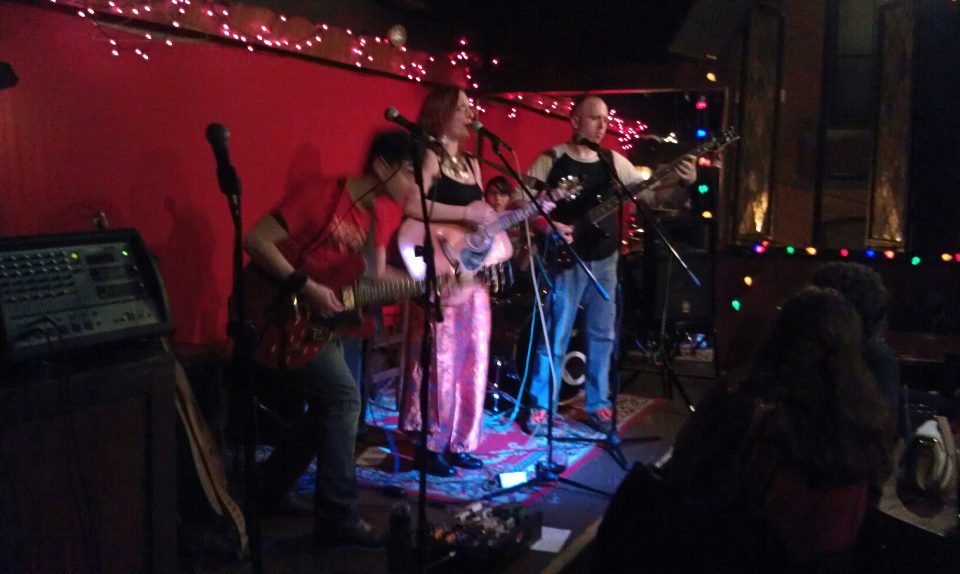 Arcati Crisis rocking at Fergies in March, courtesy of @polymwac

Reverse a month. We are playing “Apocalyptic Love Song” to a packed Fergie’s Pub, and everyone knows the words.

Finally, reverse the calendar back to February. I am a little tipsy at Gina’s dining room table with the entire team of bloggers behind PolySkeptic, half of which are two of Gina’s significant others, the pair of soon-to-be newlyweds Shaun and Ginny.

Ginny and Shaun were not planning typical wedding, and both Gina and I successfully threw a pair of atypical, untraditional, unusual weddings for ourselves. With all the uniqueness at the table, we decided it was a great idea for Arcati Crisis to act as the entertainment for their festivities. I pulled out my spreadsheet of 3,500 pieces of sheet music and we all had at it, picking out our favorite dance songs.

As the night (and, let’s be frank: the beer) wore on, our picks became more outlandish. AC covering “The Sign”? Awesome. AC covering “Don’t Stop Believin'”? No problem. We left planning to learn 4-6 new songs for the wedding, but there was also the little matter of the 4-6 new songs we were already learning as a band. We were tearing through an amazing batch of new originals, plus a pair of new covers – “A Little Respect” by Erasure, and “Love Game” by Lady Gaga.

That new batch debuted on March 16 at an awesome gig at Fergie’s Pub. It was one of those shows where everything went right. We shared the bill with Andra Taylor and Amanda Wells, and the energy in the room was incredible – as were we. I barely had a critique of myself on the way home, which is a rare occasion. I even broke a string mid-set and didn’t sweat it, simply switching to my backpacker guitar to debut our new songs.

We expected to have two entire months to learn our 4-6 cover songs, but just before the Fergie’s show we decided to take a April 19 gig at The Tin Angel. It was a month out from our last show – plenty of time to recuperate and recruit an audience, even if it pushed out our cover-learning a little.

Sadly, the Tin gig was the polar opposite of Fergies. I was in terrible voice, no thanks to a stressful week of events and meetings. We had gear problems throughout the set, probably helping accelerate the already-speedy exit of the fans brought by prior acts on the bill. After I managed to eek out the last notes of “Song for Mrs. Schroeder” from my dying voice and out-of-tune guitar I was off the stage before everyone else in the band.

Those nights are hard. You can be a well-rehearsed machine and still have an off night. I’ve seen it happen to artists a thousand times bigger than us.

What I’m sure is true for artists of any size is that it’s not only the actual night that’s hard, but the wait until your next rehearsal or show. All you have is that bad taste on your brain and fingers. It doesn’t help when that next rehearsal involves learning a slew of new songs for one of the most-anticipated days of someone’s life – especially when your star cover-singer (AKA Gina) is home sick.

Jake and I started out slowly sans Gina. We only needed 4-6 songs, after all. Oh, but what if we add another? And what if we tried that one? And wouldn’t it be fun if we really covered “You Sexy Thing”?

Here’s where being a well-rehearsed machine comes in handy. Jake can pick out the skeleton of any song on bass – it doesn’t matter if it’s a cover or an original. I can arrange anything for a band, even seemingly single-note songs. Between the two of us, we learned the basics of 20 cover songs.

You know what else? I listened to the recording of the Tin Angel. Yes, the gear problems are evident, but my voice? Sounded just fine. It might have been the best version of “Better” I’ve ever sung, even if I felt like I would cry while I was singing it.

Add to that the fact that Gina’s performance at our next acoustic rehearsal reminded us that she can sing anything… anything, and our prospects as a wedding band were looking up.

That brings us to Sunday, our weekly rock rehearsal with Zina on drums. Zina can perfect any song in three tries, and she is a wunderkind at adapting covers to our peculiar needs. Together, we crushed the list of the ten new cover songs that made it past Gina, Jake, and I on our first run-through. Yes, there is plenty to tune up, but we got through them. And…

Peter: Zina, we’re not going to try “Don’t Stop Believin’.” It was kinda terrible when we tried it acoustic.

Zina: Well, I learned it.

Peter: Why am I not surprised.

Jake: Actually, I learned it too.

Peter: I know it. I just don’t think it’s going to sound good.

We proceeded to play a very shaky version of “Don’t Stop Believin’.” Not one I would put up in front of people. Then we tweaked a few things and played it again. It sounded almost as good as a bad bar band. We added Gina on guitar and some harmony from me and played it again…

Reverse the calendar to February. The Polyskeptic gang and I, tipsy and laughing around the table about the ridiculous covers Arcati Crisis might undertake.

Fast forward to March. We are debuting our cover of “Love Game” on stage to a packed Fergie’s Pub, and everyone is dancing.

Fast forward another month. Jake and I learned 20 new songs in three hours. We didn’t skip a single one.

Rewind four days. Gina looks over at me and smiles as I sing the wailing high harmony to “Cosmonaut’s Wife” on stage at the Tin Angel – it’s the first time I’ve done it at a show.

Fast forward ten days. My eyes twinkle with tears as Gina and I harmonize on songs I’ve been singing my entire life. “Is it strange to dance so soon?” “Do you remember when we used to sing?” “No one’s gonna drag you up to get into the light where you belong.” Zina asks if we can try “Tonight Tonight” and we stumble through it impressively – a wall of sound, all of us singing harmony, all of us laughing every time we mess up and have to start again.

It was our third time through “Don’t Stop Believin'” when I really did start believing Arcati Crisis could be an actual wedding band.