You are here: Home / consume / comic books / Does the past matter after a reboot? 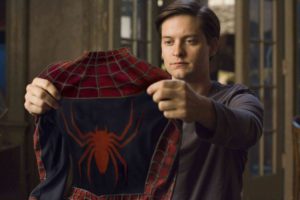 To be fair, I don’t know if any of us really wanted to see a fourth film of Maguire’s puffy prematurely-balding version of Peter Parker.

We are living in the age of the reboot.

Last week, Amazing Spider-Man relaunched the webhead’s cinematic universe while the body of the old Tobey Maguire series was still warm. There’s a new Dallas series on TV. Sherlock Holmes revisionist history movies are being released alongside a present-day version of the detective on BBC TV.

So do those older, original versions matter?

Think about your favorite TV show or series of books. It’s a serialized, ongoing story that builds with every installment and references its past. You love it. You watch every episode and buy every volume. You are a super-fan.

What if there was some prior series with the same characters and concepts, but it was not a part of the current story you love? Would you buy it? This is increasingly common in our age of reboots. If you loved the new JJ Abrams Star Trek movie – which departs from the traditional Trek timeline post-Enterprise – are the other TV series and films automatically a must-watch? What about past Spider-Man movies, original Dallas, Sherlock Holmes books, Charlie’s Angels, G.I. Joe, Inspector Gadget, or Battlestar Galactica?

To me, Garfield is the perfect embodiment of Peter Parker – thin, gangly, awkward, and genuine.

Probably not. All those past series are just an alternate reality to the present ones. You don’t need to watch both.

DC Comics  is one year into their successful line-wide New 52 reboot. Now they’re faced with a major crisis: they have a huge back catalog of trade paperbacks and hardcovers that might not matter.

DC’s rich history of iconic characters stretches back to 1938. Superman, Batman, Wonder Woman – these heroes emerged as pure archetypes and over many decades evolved into the rounder, more dynamic characters they are today. There are many hundreds of older issues of their exploits available to reprint and press into the hands of eager young fans of today. 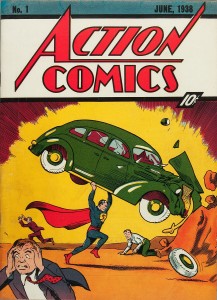 Except, today’s characters are not the same people – and I don’t just mean their personalities. DC’s Crisis On Infinite Earths rebooted everyone back in 1984, making post-1984 books the equivalent of new-Trek. Some of the characters beneath the masks of Flash and Green Lantern weren’t even the same as before! Then, after many years of tweaking, DC rebooted again last fall – creating a new-new-Trek.

What wasn’t immediately evident from those #1 issues was that some characters survived more intact than others. Batman’s corner of the DC Universe? Seemingly mostly the same, even if Bruce is younger than before. Superman? Origin retold from scratch, parents now dead, never in a relationship with Lois. Wonder Woman? Major changes in the Amazonian status quo, right down to her parentage.

Which brings me to my titular question: do DC Comics Collections matter? Yes, there are the Watchmen and the Killing Joke, the indisputable evergreen classics of the comics medium that will move units regardless of if their stories still count for anything.

But what about DC Archives, their premium hardcover reprints of Golden and Silver Age comics? What about Wonder Woman #205? Action Comics #527? The 70s Green Arrow / Green Lantern series?

None of it counts in continuity, so does it matter anymore? These classic stories have little to nothing to do with the current state of my favorite heroine. They aren’t all prohibitive classics. So, is there any point in reprinting them?

(Marvel doesn’t have this problem. Aside from some isolated soft reboots of certain characters, everything still counts, all the way back to the 40s. Every issue of X-Men is acknowledged and in continuity.)

Does the alternate past matter? You decide.

I want to know what you think. Do older stories still have a place post-reboot? If you loved JJ Abrams’s Star Trek did you immediately jump back to rewatch the original series?

And, on our case study: Should DC even bother to reprint non-seminal stories of characters other than Batman if they don’t matter in current continuity?

What do you think?