(That isn’t an exaggeration; the online omnibus community produces a yearly secret ballot to determine its most-wanted books and this one tops the list, as also reported by Omar.)

This is the last omnibus X-fans need to complete their oversized bookshelf of Uncanny X-Men (1963) #1-321. That means it’s time for the celebration to begin! Let the X-villagers rejoice!

The hesitation comes down to the initially-announced contents of the book, what fans assumed it would contain, what Marvel has recently reprinted, and how Marvel plans to continue collecting Uncanny X-Men in omnibus in the coming years.

(Note: Omar very kindly invited me to a discussion of this topic on his channel, but I couldn’t make it work across time zones. Plus, I’m trying to keep my X-Men X-Posure contained to CK, at the moment.) 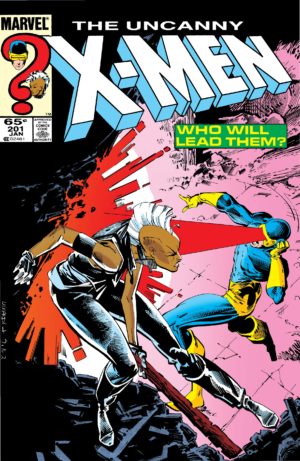 The contents of this volume, as announced by Omar on Near Mint Condition, are:

I’ll explain why all of those issues are in the omnibus in just a moment. First, let’s talk about what’s missing. Or, should I say “missing” – since not everyone agrees.

The initial solicited contents of Uncanny X-Men Omnibus Vol. 5 skips two runs that many buyers of all of the X-Men omnibus line anticipated it would include, for reasons I’ll cover below.

Here is what the contents do not currently include:

If you know your X-mapping well, you will immediately see the problem with these exclusions! By leaving Annual 10 out of this volume, Marvel has invented a difference between the mapping of the X-Men “Classic Omnibus” line that begins with Volume 1 and the X-Men “Event Omnibus” line that begins with Mutant Massacre. But, there’s no reason that difference has to exist!

If you’re not a X-Men mapping X-Pert yet, keep reading for a complete X-Plainer.

At first glance, the contents of this newly-announced omnibus are unsurprising. 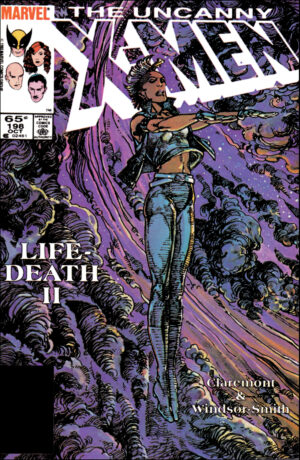 Marvel’s “Classic” omnibuses of their major titles and characters recollect material that was initially restored by the Marvel Masterworks premium color hardcovers. Each classic Omnibus tends to collect the contents of between 2.5 and 4 Masterworks volumes, depending on their length.

Yep – everything on that list is in the book above! Let’s take a moment to discuss why the issues outside of Uncanny X-Men are included:

(Some people wanted these books to include Beauty & The Beast or the Iceman mini-series, but these rightfully belong in the Defenders Masterworks/Omnibus line, as neither character was part of the X-line at the time.)

The contents of these books make complete sense. There’s nothing obvious missing from either of them. So, how can there be something missing from an Omnibus that copies them exactly?

The Problem: Uncanny X-Men Annual 10 (& the birth of X-Factor)

If the contents of the omnibus exactly match the Marvel Masterworks, why should it include Uncanny X-Men (1963) Annual 10 and New Mutants (1983) Annual 2? And, why would it include all of those X-Factor issues? 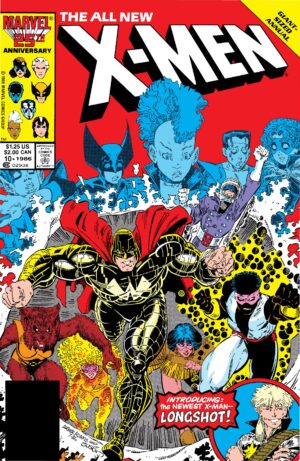 The problem boils down to Betsy Braddock and the Mutant Massacre.

Chris Claremont imported Betsy Braddock AKA Psylocke from his Marvel UK run on Captain Britain in the New Mutants Annual 2 followed by the UXM Annual 10. The stories go together.

She then shows up on the team in Uncanny X-Men #211 and plays a critical role in Mutant Massacre. Even though UXM #210 begins the set-up of the major Mutant Massacre story, Annual 10 fits between UXM #210-211 to add Psylocke to the team.

That should place New Mutants Annual 2 and UXM Annual 10 in the next omnibus!

Except… the next omnibus already exists.

The problem is obvious: the Mutant Massacre omnibus omits UXM Annual 10 and New Mutants Annual 2 from their rightful spot between UXM 210-211. If Uncanny X-Men Omnibus Vol. 5 omits them too, they’ll be abandoned!

Marvel is clearly in the wrong here, right? Annual 10 is about to be abandoned!

Not quite. The announcement of this new Vol. 5 omnibus came along with the announcement that Marvel has already mapped Uncanny X-Men Omnibus Vol. 6-7, which will continue into Mutant Massacre and beyond. That’s where we will find Annual 10 (and New Mutants Annual 2 along with it).

Adding more problems, the Mutant Massacre omnibus begins collecting X-Factor alongside Uncanny X-Men beginning with X-Factor (1986) #9. This trend continues through three more oversize books – Fall of the Mutants, Inferno Prologue, and Inferno – all of which have been recently reprinted by Marvel after years of high demand on eBay. Together with Mutant Massacre, the four volumes collect X-Factor (1986) #9-40 & Annual 2-4.

For fans who have bought every Claremont-era X-Men oversize hardcover from 2010 to present, it seemed extremely obvious that Uncanny X-Men Omnibus Vol. 5 would need to include X-Factor (1986) #1-8 & Annual 1 (plus the two issues of prologue in Avengers (1963) #263 and Fantastic Four (1961) #286). It doesn’t hurt that X-Factor is a natural extension of the Uncanny X-Men material in the book – it explains where Cyclops departs to after #201.

From this announcement, it’s clear Marvel has plans to collect all of X-Factor in its own, separate omnibus line, just as it has already done with Chris Claremont’s run on New Mutants.

For the past 12 years, X-Fans worked from the assumption that the X-Men oversized hardcover line was one single line. The UXM Classic Omnis were in the same “line” of books as the Event-titled hardcovers, and that Marvel’s mapping would meet up perfectly in the middle. 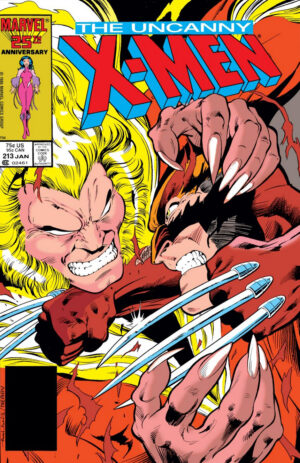 In fact, Marvel has decided it is two different lines:

When the expanded Mutant Massacre omnibus omitted UXM Annual 10, fans assumed it would fit into the prior omnibus volume. Yes, it would be one issue out of its story order, but that would be in the service of placing it alongside the Longshot mini-series, since the annual heavily features Longshot and Spiral alongside Psylocke.

Also, Marvel had just finished a several-years effort to reprint all of those “Event Omnibus” books with proper “Marvel Omnibus” spines they lacked on their first printings. Since the Event books have all of X-Factor (1986) #9-40 & Annuals 2-4, many people had an additional assumption that when the books met up in the middle the final gap-filling book would have X-Factor #1-8 & Annual 1 as well as the pair of X-Factor prelude issues from F4 and Avengers.

Now that Uncanny X-Men Omnibus Vol. 5 has been announced alongside Marvel’s plans for UXM Vol. 6 and 7, it is clear that the Classic line and the Event line books are two different lines of books. The Classic Omnibus line won’t end here, as many of us thought it might. Instead, it will continue to collect exclusively the Uncanny X-Men material already collected in the event books as mapped by future Masterworks volumes.

However, the only thing that is truly making the two lines incompatible with each other at this central joining point is the omission of UXM Annual 10 (and New Mutants Annual 2 along with it). If the annuals were included in this new book, that would mean that any future reader could make their own decision between continuing into the Classic line or the Event line.

Omitting these two issues from UXM Vol. 5 feels like a cash-grab from Marvel to force people to continue buying the Classic line when they have already spent hundreds (or, possibly, thousands) of dollars on both the Classic line and the Event line from 2010 to present. By simply including these two missing issues in the newly-announced book, everyone who bought every UXM Omni/OHC from 2006 to present will have a complete shelf of UXM.

(The only people who Marvel would risk annoying in this situation are people who bought Masterworks Vol. 13 and then also the eventual UXM Vol. 6 omnibus, thinking the two would marry together. However, that’s a much, much smaller group of people than the thousands who have been buying the omnibus line through its many reprints for the past 16 years.)

It’s harder to resolve the X-Factor issues. Rather than being a pair of extra-length annuals that add about 100 additional pages to the book, they’re an entire tome of their own representing over 400 pages of content parallel to the main story of this book. As badly as we all wanted to see them collected here, it makes just as much sense to see them omitted.

This is a bittersweet announcement for me. 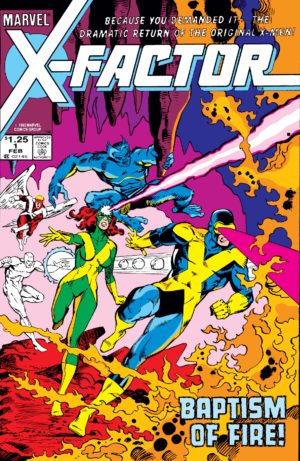 First, there’s Marvel’s obvious goof-up with Uncanny X-Men Annual 10. Really, it should’ve been placed in the Mutant Massacre omnibus four years ago! We’re just feeling the ramifications of that now. This is the only time since the original Uncanny X-Men Omnibus Vol. 1 in 2006 that Marvel issued a book in the X-Men omnibus line that simply *does not* line up with other existing books.

I understand that it is because Marvel is drawing a line between the UXM-only books and the event books. It feels a little insulting that they have suddenly chosen to draw that line over 2 issues in the final book those of us who have been collecting ALL of their books for 16yrs need to fill the gap in our continuous UXM #1-300 collection.

Second, there’s the X-Factor issues. I’ve long since made peace with not getting X-Factor #1-8 in this book, but I was holding out a hope that Marvel would just fling those 11 issues into this gap-filling omnibus as a thank you to the fans who have bought well over a dozen oversize books to build their oversize X-Men shelf from 2010 to present.

I don’t mind that so much, but it would have been a “nice to have.”

Finally, this really could be my final Marvel omnibus (or, at least, the final one I’ve been actively wishing for)!

I don’t buy physical copies of comics released after 2015, and I already own a physical copy of every comic from a major Marvel title from 1963 to present unless they are still to be covered by the big Epic Collection lines. I don’t feel the need to have an omnibus of everything – they’re a prestige format I only collect for my favorite runs, like X-Men, Wonder Woman, and Tomb of Dracula.

Uncanny X-Men Omnibus Vol. 5 is the only true remaining GAP on my existing shelf that I am desperate to fill. Clearly Marvel could pull me back in with a pair of X-Factor omnis, a final New Mutants Omni, or by continuing the combined Uncanny X-Men + X-Men (1991) line from after Age of Apocalypse to Uncanny X-Men #369 to meet up with the X-Men Vs. Apocalypse: The Twelve Omnibus on the other side.

However, that’s a finite list, and it’s comprised entirely of material I already own in at least two other formats.

I feel like I’ve done my time and paid my (literal) dues. This Uncanny omni feels like my chance to finally say my Marvel Comics collection is complete, aside from occasional obscure mini-series and keeping up with Epics (largely for reference purposes).

My hope is that the overwhelming fan outcry against the omission of Annual 10 can sway Marvel’s collection department to include it. Omar’s initial video already has amassed 500+ comments in just two days, and the vast majority of them are complaints. Omnibus print runs run in the 4-figures or low 5-figures. Having 500 complaints is a not-insignificant amount of potential buyers – and, that’s just the people who happen to watch Near Mint Condition videos as soon as they are released!

In the end, I’m thankful that Marvel has been so attentive to collecting Uncanny X-Men. That’s all I wanted 12 years ago this month when I launched Crushing Comics – a way to own all of Uncanny X-Men as bound books! This volume represents the end of a quest that cost me thousands of dollars, saw this site experience an exponential growth in traffic, and included me moving around the world (along with my comic collection)!

Even if it omits Uncanny X-Men Annual 10, the existence of Uncanny X-Men Omnibus Vol. 5 will mark the close of a major chapter of my life.

Previous Post: « Guide to Legion of Super-Heroes – now available to the public!
Next Post: New for Patrons: Guide to Doctor Fate »