There’s only one of these books released each month, so these are the big bombshells from the announcements. 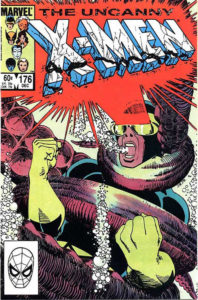 That would put the following additional issues into play (though not all could fit):

Unfortunately, it doesn’t seem as though we can fit both Magik’s series AND the Kitty series unless the UXM contents are a hair shorter – if it ended at #184-185 it could work. Plus, Kitty penciller Al Milgrom is not on the list of creators.

Daredevil Omnibus Vol. 1 – Daredevil Guide
Probable Contents: If the page count of 1088 is to be trusted this will break the rule of 3 MMWs to a Silver Omnibus. That’s not as big of a surprise as it sounds – Spider-Man, Vol. 1 also included four MMWs. That would make the content Daredevil (1964) #1-41 & Annual 1, plus Fantastic Four #73. See my full write-up on the contents of this volume.

Deadpool: Beginnings Omnibus – Deadpool Guide
Well, this is intriguing! It will give us an unbroken oversize run of Deadpool from his inception through the beginning of Daniel Way’s series. Thanks to the Liefeld and Nicieza credits, we know this will hit New Mutants and early X-Force. The lack of Joe Mad in the credits is suspicious, but it’s still early.

Star Wars: Darth Vader Vol. 2
Confirmed Contents: Star Wars: Vader Down, Star Wars #13-14, Darth Vader #13-15 + Annual 1 + #16-19. Fans have pointed out that this leaves an awkward gap of Darth Vader #20-25 for a final oversize volume since the series is ending there. I’m sure we’ll have more information to worth with in the next few months.

War of Kings Aftermath: Realm of Kings Omnibus – Marvel Events Guide
Oh boy! You can read my full write-up of this potential book. The contents here are a little tricky to predict because Dan Abnett and Andy Lanning wrote just about everything in this era. The lack of Tan Eng Huat as an illustrator puts the inclusion of Annihilators: Earthfall into question, but I’m not sure how else they can hit the massive page count of 1248 without including almost all of the above.

That’s 1254 pages – and, considering that I estimated a bit high and there are back-ups that could be left out, that remains my bet.

January: Iron Man Epic Collection: By Force of Arms – Iron Man Guide
This is certainly Epic Vol. 2 and should include Tales of Suspense #73-99, Iron Man and Namor 1, and Tales to Astonish #82.

January: Wolverine Epic Collection: Shadow of Apocalypse – Wolverine Guide
The title suggests this would be Wolverine Epic Vol. 2, which would include Wolverine’s battle with Apocalypse in Jungle Adventure. However, Joe Casey and Jeff Matsuda are listed as authors, which would place this in the range of #127 – #138. Since #133-145 represents an uncollected gap, I’d say we’re in for something in that neighborhood, that might repeat Black Rio (less likely, since it was just reprinted) or add Wolverine/Cable (both Casey’s writing credits).

Cloak and Dagger: Shadows and Light – Cloak & Dagger Guide
432 pages is a hefty collection, so what could this include? Most likely, it’s the original pair of Cloak and Dagger hardcovers with some linking stories from New Mutants.

(I had hoped it would be the following, but the creator list seems to disprove it: Cloak and Dagger (1985) #1-11 would yield something like 264, so it could also pick up their subsequent Strange Tales (1987) split series with Doctor Strange, which would account for slightly less than 240. That leaves us a bit high, but it plugs a fairly obvious gap after a pair of existing Marvel Premiere Hardcovers.)

Ghost Rider/Wolverine/Punisher: Hearts of Darkness – Ghost Rider Guide / Wolverine Guide / Punisher Guide
This was an OGN from the 1990s, but at 112 pages this might be more than a direct reissue.

Avengers: Endless Wartime
A TPB re-issue of the OGN

Black Panther: Doomwar – Black Panther Guide
This is more than simply a recollection of Doomwar, it might include some of the Panther series that surround it.

Purely a rebrand of the prior Annihilation material, now hard to get in TPB – or, something more? Slott and David didn’t write anything there, but they did write preceding Captain Marvel and She-Hulk issues. I need to dig into this creator list a little more.

Wolverine by Daniel Way: The Complete Collection Vol. 1  – Wolverine Guide
This recollection of Wolverine: Origins probably starts with Wolverine (2003) #33-35 or #36-40, which were House of M and the issues directly followed the revelations of House of M and were written by by Daniel Way with art by Javier Saltares. Then, Steve Dillon illustrates Wolverine: Origins (2006) #1-15. Amazon also lists John McCrea, Staz Johnson, Bart Sears, and Ken Knudsten, which seems to indicate this will begin with Wolverine (1988) #187-189 (also by Way).

The surprise omission for me is Brian K. Vaughn’s Logan, as I’d think Marvel would want to trade in on his name and it fits squarely in with this material.

Non-Marvel, Non-Continuity, & Not Sure

Deadpool: Back in Black