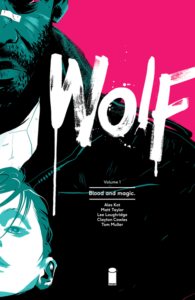 This is not his story and we’re left in relative darkness about his history and the exact nature of his powers. All we know is that he’s the kind of death-proof, magical guy you hire to look into things that require looking into in a Los Angeles that borders directly on Hell. (Kot is vague on whether that’s figurative, literal, or both.) He’s also a magnet for supernatural trouble, whether that’s his half-Lovecraftian buddy who is late on rent or a strangely-calm teenager in the midst of a murder investigation with an X-Files sort of twist.

It is not just Kot’s plot that makes this compelling, but the language. He writes how people talk. Not in the word-vomiting “ums” and “aws” that some comics writers obsess over, but in the witty little statements that we smile at as we say. (“You one of them scientific racists, hm?”) His characters are frequently pleased with themselves and their turns of phrase, and that speaks more to making them dynamic than a wall of exposition. 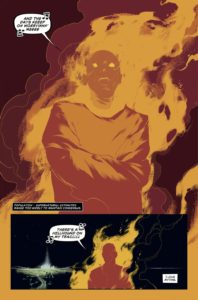 That impulse leaves lots of dangling threads about old deals and murderous weather, but they never feel like loose ends. Kot commits to the best tactic of low fantasy – a genre of irrational occurrences in an otherwise rational world that we recognize – and treats those threads as any other common information someone could mention without question. Pop stars are vapid. The police are familiar with immortals and vampires. Winter is cold. The Santa Ana winds are hungry.

Matt Taylor’s art is effective throughout. His figures are plaintive and distinct, frequently evoking Mike Mignola’s unfussy faces. He combines that with occasional bursts of detailed roughness in the world that surrounds them – dogs, shelves, and faraway buildings. Taken together, it pops the characters off the page and imbues them with motion. My only critique is that occasionally a pair of his supporting characters could look a bit too similar.

That has as much to do with Taylor’s simple faces as it is with Lee Loughridge’s consistently flat, washed-out palette. It’s not the dingy L.A. you might expect, but a world of mottled, earthy tones that pop back into the reds and oranges of that initial fire whenever we hit a beat of conflict (magical or not). The creepy green overcast is oppressive both indoors and out, which makes those incendiary moments all the more special when they explode.

For most of this volume you’ll feel as though Wolfe is ambling through life without understanding the significance of what’s happening to him. That’s the point. One of the first (and few) things he outright explains to us about is synchronicity – how it means something when things line up. As this tale builds to a climax, you realize all that ambling had a lot in common, which bestows a greater importance on all of the events and how they intersect. This is a much better parlor trick than a simple twist ending that makes you re-read a certain character or scene with new knowledge. Instead, a second read unveils a second layer of meaning to everything.

Wolfe says it best on page one: “How do you feel about myths?” I am admittedly predisposed to works that ask me to imagine our world slightly skewed by the spectre of a preternatural element, but even if I wasn’t I have to believe I’d admire what Kot and company have wrought here. I can’t wait for Volume 2 – Apocalypse Soon, which releases this August.