Spellbound is a much stronger LP than Forever Your Girl. It signaled this clearly on each of its first two singles – “Rush, Rush,” a ballad with Abdul’s finest recorded performance (crazy, since it’s reportedly an early scratch vocal) and the unpolished and new age-y “Promise of a New Day.” The third single was the marginal ballad “Blowing Kisses In the Wind.”

That meant that the core of this album had yet to be heard by the general listening public. It included a sexy, sultry, witty set of songs that paired well with Prince’s 1991 effort Diamonds and Pearls. Songs like “Spellbound” or “U” would have made terrific singles that could compete on the radio. (“U” was even written by Prince! How do you pass that up as a single?!)

So, of course, the fourth single was “Vibeology.”

This song… I really have no words. I love it so much. How can I possibly express my feelings to you other than through dance?

“Vibeology” sort of takes the position of, “What if Paula’s duet with MC Skat Kat was the best thing on that first record?” And, well, “Cold Hearted” aside … maybe it was? While Spellbound was pretty evenly split between ballads and more sultry numbers, 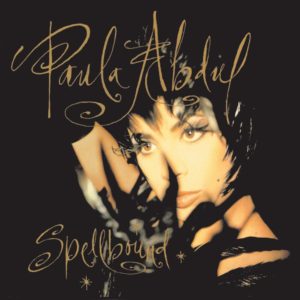 Yet, there is something I unabashedly love about this song. It’s basically built from the same pieces as “Vogue” – check out the bounding low bassline and the clanging piano chords. If you stripped away some of the silliness here and moved the “you got the vibeology” rap further into the song, it would actually feel a lot like “Vogue.”

Honestly, I think this song single-handedly killed Paula Abdul’s career – maybe specifically her low-rent “Express Yourself” video, sexy frumpy circus-with-feathers aesthetic, and subsequent pitchy MTV Music Video Awards performance. When she came back with an even sultrier follow-up in Head Over Heels it seemed like a desperate grab for attention in a post-pop, rock-oriented world – but, that’s only because it was never set up with the right singles from Spellbound.