Everything felt different on April tenth.

Though he never looked any different than he had on the ninth, on April tenth Nathan Padell felt more a man than on any other day – felt the weight of the world settling down upon him. It was a day to reflect, to shed a tear, and to have some small inkling of hope. 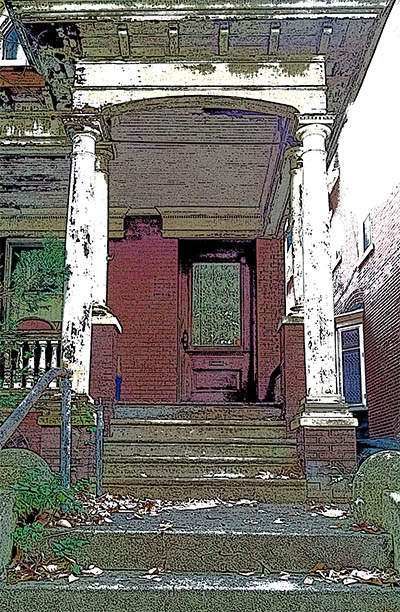 He did not even consider himself a man, necessarily. He had boyish looks that refused to mature into something more credibly grown up and a boyish enthusiasm for everything – even utterly unexciting drudgery at the office. At least, that’s what he was told. He was slimmer than average, but not taller, and given the opportunity he would live his entire life in blue jeans and t-shirts. Even at twenty-seven years old with a corporate job and his own apartment he felt like he was still not quite an adult.

Except for on April tenth.

It was a day he visited Ella, without fail.

Nathan stood on a cracked slab of West Philadelphia sidewalk, prepared to mount the steps to the porch of Ella’s apartment building. Actually, it was a just a house – one of the booming, three-story, faux Victorians common in West Philly. This block of them had long since been carved into duplexes and triplexes to accommodate the swell of students from several nearby colleges, which earned the area the nickname “University City.”

The sagging porch roof smiled a lopsided grin at Nathan, the heavy molding on the trim like a set of scuffed wooden teeth. Ella’s side street was typically shrouded in quiet, broken by occasional blasts of noise – car stereos passing on the adjacent streets, distant dog barks, and the hollow sound of a basketball bouncing somewhere out of sight.

Nathan smiled back at the roof and took the stairs two at a time. He crossed the groaning floorboards of the porch and rang Ella’s buzzer with one hand as he jiggled the handle of the front door with the other. It popped open, as it always did. He let himself in to the dim vestibule, separated from the foyer beyond by a heavier metal door with double-paned security glass window. It screamed in dissonance against its warm wooden surroundings.

He felt annoyed with her, despite himself. I turned down a gig for this, he thought. A good one. As if he would miss this night, any more than she would.

Ella probably would have come to the gig, if he had asked. That was their arrangement with each other, unspoken these five years. They watched each other. Nathan watched over Ella, trying to navigate around the empty spaces in her life. Ella was Nathan’s audience, listening to his worries and validating him in times of doubt.

Neither of them truly made up for the thing they both lacked, but at least they found something to share in its absence.

Ella’s halo of red curly hair preceded her around the corner of the apartment stairs. When they were younger he would tease her that she looked like a Raggedy Anne doll; at the time her hair was even more unruly. She had always carried an unusual affect to match her wild mop of hair. An ineffable, timeless quality animated her impish features to suggest something beyond her now nineteen years. Ella stood a head shorter than Nathan, her face dotted by a smattering of permanent freckles. She was small, but not slight. Tonight she was wore a navy blue peasant blouse, falling casually off her left shoulder, and a pair of cranberry corduroys, faded at the knee, over bare feet.

She stared at Nathan for a second through the glass, chin slightly raised to look him in the eye.

She said it in the practiced, noncommittal tone of a teenager. This was part of their April tenth ritual. Any enthusiasm fell entirely into Nathan’s court. Ella would contribute enthusiasm to their relationship only on the other three hundred and sixty-four days of the year (and then only sparingly).

“‘Hey,’ yourself, Ella. Were you planning on opening the door, or are we doing this year entirely through a pane of glass. Because, I can think of a whole list of more interesting places for us to be standing, if that’s the case. What do you say – should we relocate to an aquarium? That weird little Chinese place on forty-third with the bullet-proof take-out counter that makes dumplings like my mom’s?”

Nathan noted with satisfaction that Ella giggled faintly at this, her mouth twisting sideways to disguise her mirth. She used to be much harder to crack. “What about a prison? I could rob a bank, and then you could visit me in prison. You know, in the visitors’ area, with the special phones to talk to each other? Sometimes on TV they don’t have the glass – just those sad little metal tables, and they let the visitors hug the prisoners. I guess I need to go to a high-security one if you’re really set on the glass, huh?”

“Alright, enough.” Now smiling fully (if a bit ruefully for letting it show), Ella turned the deadbolt on the inner door. “Rob a bank, for all I care. For now just come in.” She pulled the door towards her with both hands while Nathan pushed, their custom for sliding it past the shabby pile carpet of the hallway. Once it was open wide enough for Nathan to slip through along with his messenger bag they gave it a hefty shove so that it would close again. The deadbolt gave a dull thunk as it locked.

They did not hug. Unlike those television prisoners and their occasional visitors, Nathan and Ella never hugged.

Ella turned from him without a word and walked back across the shaggy hallway carpet to the stairs. They were a square spiral that rose through the heart of the building and climbing them seemed to take an eternity thanks to an oblong landing at every corner. Ella’s apartment was on the third floor.

Her older sister – Martina – was also Nathan’s closest friend and bandmate. Five years ago, on April tenth, she drove her car off the edge of the Green Lane bridge in Manayunk into the Schuylkill River, below.

Or, five years ago Martina’s car drove itself over the edge of the Green Lane bridge in Manayunk into the Schuylkill River, below.

Nathan often thought of it in those terms, and he thought about it often. There was no evidence to say she had done the driving, intentionally or not, and no body.

The lack of a body was a problem – for Nathan and Ella and their closure, and for the local police detectives and their investigation. It left Martina’s disappearance as a frustrating, unsolved mystery looming ominously in the wake of the crash.

The police tried to solve it. At first they were keen to believe Martina was drunk, which at least would explain some things. Young rocker overindulges, steers wrong, plummets to her death. A cautionary tale. Except, she had not been drunk, as Nathan explained repeatedly and with increasingly exasperation to anyone who would listen (which only sometimes included the detectives assigned to the case).

Nathan knew Martina was not drunk because they had played a concert together that night. Whenever they played a show, Martina’s ritual was to drink exactly three sips of a beer with a lemon wedge in it a half hour before their set. She would then leave the beer unattended on the floor beside her guitar case, where she would inevitably tip it over upon her return. Typically, Martina’s guitar case wound up imbibing more beer than she did. She had proven to be a lightweight on many occasions, which is how the three sips ritual came to be. She could play a set at nine after three sips of beer at eight-thirty, and she could certainly drive home at one in the morning.

Without Martina’s drunk driving to blame – and it took a long while to establish its absence – her crash was ruled an accident. Or maybe a suicide. The police were keen on suicide once they weren’t able to be keen on drunk driving. Mostly they were keen to be keen about anything that would explain away the crash, rendering the case closed.

Nathan preferred “accident.”  “Accident” gave him a slight hope to harbor on April tenth. To his eternal blend of obsession and chagrin, Martina was good at everything. If she really had wanted to die – if she could have somehow kept that from him all of those years – then she would have found a way. And, that way probably would not have been driving her car off the side of a road. It was … inexact. Martina was always exact. She was perpetually on the Dean’s List, a much better musician than Nathan, and a chemist. Or, she would be a chemist now if she was still around.

Alive. If she was still alive.

Thus, five years later Nathan still referred to it as “the accident,” though there had been no tire marks and no sign of her car being struck by another vehicle when they finally towed it up out of the river.

It was awkward those first few years. Martina had been Nathan’s best friend and Ella’s role model. Without her, their lives felt empty. Neither one of them seemed to be able to fill the chasm that was left in the wake of Martina’s disappearance. After a while they stopped trying, and from there they found their connection.

Nathan wondered about their April ritual as he trudged around another corner of the stairwell, cast in a dull yellow by a series of sconces on the walls. He knew why they spent time with each other the rest of the year, but he was never sure what Ella marked with these visits. He was marking his hope – hope held out that one day Martina might join them for dinner. It would definitely fit her dramatic sense of occasion to show up to celebrate the anniversary of her own death.

Five years is a pretty dramatic interval, Nathan mused as he reached the top of the stairs. Maybe this is her year.

Tune in next Friday for the remainder of this chapter! I am sharing this working draft of my novel for free. If you like what you’re reading, consider contributing to my Patreon campaign for as little as $1/month.