As a part of Marvel’s new “Legacy” era of publishing, they’ve revived the series of several long-cancelled heroes for just one more issue. One of those heroes was Shang-Chi, which made for the perfect opportunity to update the Shang-Chi, Master of Kung Fu collecting guide and reading order!

Maybe you don’t need a guide to every appearance Shang-Chi has ever made right now … possibly because you don’t know who he is! Keep reading for a brief introduction, where to start reading, where Shang-Chi has been in 2017, and why his collected edition standings are a little… unusual. 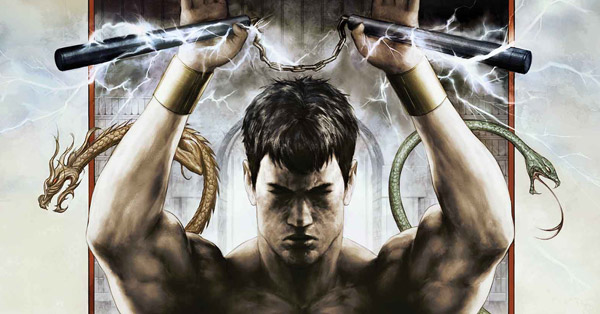 Shang-Chi is the son of famous pulp fiction villain Dr. Fu Manchu, though Marvel doesn’t own Fu Manchu and Shang-Chi has never appeared in a Fu Manchu story. 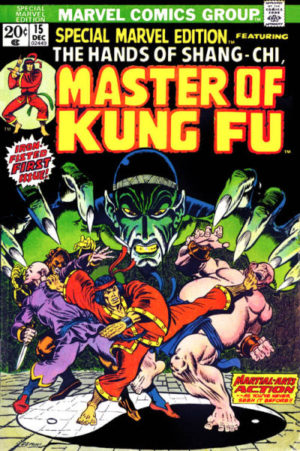 Genre and licensed comics were big business for Marvel in the 1970s, and in addition to cornering the horror market with titles like Tomb of Dracula and Werewolf by Night, Marvel also acquired licenses for Conan, Star Wars, Godzilla, and Sax Rohmer’s Fu Manchu stories.

While Marvel left Conan and Star Wars isolated in their own continuity, they saw an opportunity with the rich Fu Manchu material to create an instant back-story for a new hero in their universe. What used to be Special Marvel Edition introduced Shang-Chi and then quickly made him the headliner of the book, swapping the title to Master of Kung Fu with issue #17.

Shang-Chi transforms from villain to hero in his first appearance. For years, Fu Manchu used Shang-Chi as his hand in thwarting law enforcement and sabotaging competing crime lords. Fu Manchu’s duplicity relied on his son being completely virtuous, so that he would never question his orders nor challenge his father’s power. That trickery serves as Fu Manchu’s unravelling, as when Shang-Chi learns the truth about his villainous father he quickly changes sides to fight against him.

The newly heroic Shang-Chi is recruited by Sir Denis Nayland Smith (an original Rohmer creation) to join MI:6, the British Intelligence agency. That makes his book a unique blend of Bruce Lee and James Bond, with him defeating ninjas in one moment and orbiting the moon in the next. After seemingly defeating his father, Shang breaks away from Nayland and MI:6 to go on his own heroic journey and continue fighting his father’s organization.

Shang-Chi’s solo title, Master of Kung Fu, ran from issue #17 to #125, with the majority of the run penned by Moon Knight creator Doug Moench. He retired from heroism at the end of his series in 1983, and Marvel’s writers respected that by rarely making use of him in the years following until Moench revived the character for a pair of stories in 1988 and 1990.

Shang Chi only had a handful of stories in the late 90s, sketching an arc for him across Hong Kong and Madripoor, before he wound up in the cast of Marvel Knights in 2000 – a sort of precursor to the street-level cast and mature vibe of Marvel’s Netflix shows. He saw relatively little use in the next decade outside of a MAX series by Moench and joining a revival of Heroes for Hire. 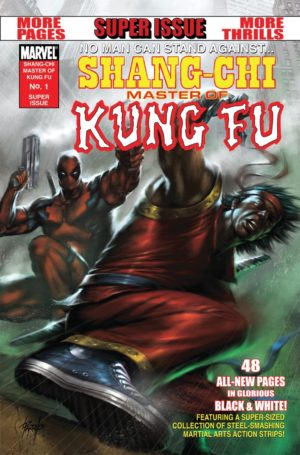 His first real return to prominence began in 2010, when major Marvel writers like Ed Brubaker and Jonathan Hickman showed their affection for the character by adopting him into the Avengers runs.

Where to Start Reading Shang-Chi

Shang-Chi’s magnificent 70s series has been completely collected in a series of four omnibuses, starting in Shang-Chi, Master of Kung-Fu Omnibus, Vol. 1

If you don’t have more than $200 (and a lot of shelf space!) to drop on a character you’ve never read (or are just daunted by the idea of the four huge books), you can look forward to them being recollected as paperback Epic Collections starting in 2018 with Epic Vol. 1: Weapon Of The Soul.

There’s really no other good place to begin Shang-Chi. Neither his early-2000s MAX mini-series or 2014 mini-series really do the character justice.

Shang-Chi has been used very lightly in All-New, All-Different Marvel, making just a pair of appearances prior to getting his own Marvel Legacy one-shot.

He appeared in Greg Pak’s Totally Awesome Hulk as an impromptu team of Asian superheroes including Ms. Marvel and Silk. Later, he appeared in a solid two-issue arc of Iron Fist in #6-7.

Shang-Chi is unique amongst all Marvel heroes in that Marvel specifically dedicated itself to comprehensively covering his initial series in oversize format. Since he has seen relatively little use since then, that makes his overall collection status quite thorough!

* Some stories from Shang-Chi: Master of Kung Fu one-shot have been collected, but to the best of my knowledge there is still uncollected material from the issue. 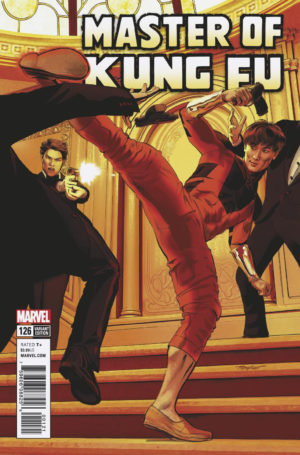 There are very few Marvel heroes who had their start in the 1970s who we can say have reached over 90% collected-in-color status – even ones who had much shorter runs than Master of Kung Fu. Of all of Marvel’s heroes, only the massively popular and mostly-modern Thanos and Deadpool have similar track records.

Also, if we only count Shang-Chi’s starring series, he is over 86% collected in oversize format!

How did we get here? It’s a combination of Marvel’s unprecedented all-in release schedule for Master of Kung Fu and Deadly Hands of Kung Fu and Shang-Chi’s relative absence in the 90s. It’s not a surprise to see that 6 of his 7 uncollected issues are all 90s anthology appearances, as that’s where Marvel tends to be weakest.

Will we ever see those issues collected? I think there’s a chance if Shang-Chi ever makes a comics comeback or screen appearance. His handful of 90s anthology and guest appearances make for a surprisingly coherent arc across different writers, and would make for a pleasing read amassed into a single trade. Given that it’s the only trade of uncollected Shang-Chi material Marvel has left, I’m sure we’ll see it at some point! Or, perhaps they will tack some of that material onto his final Epic Collection, when the time comes.

Want to get started in reading every one of Shang-Chi’s 214 starring appearances in order, plus check in on every time he’s been a guest star? Head to my one-of-a-kind guide to Shang-Chi for the full story!