You are here: Home / consume / comic books / Master of Kung Fu gets collected (or: After 100 years, Fu Manchu is still a villain)

This was the news last night from the Diamond Retailer Summit via Heidi MacDonald, EIC of Comics Beat: 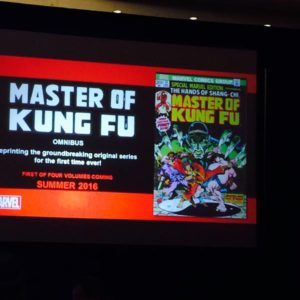 Photo of Marvel’s slide from the summit by Heidi MacDonald of ComicsBeat.

This is a series you’ve probably never heard of, yet it’s both historically significant and solidly entrenched in the top 10 most-wished-for Omnibus editions from Marvel’s online collector community.

What’s the story behind the excitement and why does this seemingly obscure series merit four massive volumes? To figure out the answer, we need to travel back in time over 40 years to 1974.

Similar to Marvel 70s horror titles Tomb of Dracula and Werewolf by Night that emerged in 1972, Master of Kung Fu both featured a major non-Marvel character and was built to serve a public craze.

In this case, the craze was the titular Kung Fu. It was blowing up in the summer of 1973 thanks to a culmination of factors including the television show Kung Fu, a number of successful movies imported from China’s booming cinema, and one man: Bruce Lee. To read more background, I suggest starting with a marvelous pair of blog posts from “A Shroud of Thoughts” – parts 1 and 2.

Marvel wanted to license the popular Kung Fu to take advantage of the nationwide interest in martial arts (which also yielded Iron Fist), but they failed to obtain the rights. Instead, they turned to another pre-existing mythology: the story behind villain Fu Manchu, a fictional criminal mastermind who coined the mustache of the same name. He was created by author Sax Rohmer in 1912 in a serialized novel, The Mystery of Dr. Fu-Manchu.

Fu Manchu was popular enough to merit an initial trilogy of serialized books in the 1910s and even more starting in the 1930s, plus a number of film adaptions ranging from 1929 to 1980. The character can be a controversial one – even in the 1930s he was seen as a racist caricature representing the “Yellow Peril” of an East-Asian threat to the wider, whiter world. 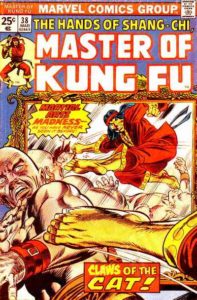 They licensed the Fu Manchu universe from Rohmer’s estate, which was mostly focused on film adaptations in the 60s after Rohmer’s death and final book in 1959. Instead of keeping it isolated in its own continuity they created Shang-Chi as a part of the Marvel Universe and made him the son of Fu Manchu! What used to be Special Marvel Edition introduced Shang-Chi and then quickly made him the headliner of the book, swapping the title to Master of Kung Fu with issue #17.

The Master of Kung Fu series remains well-regarded by fans not only because of its rarity, but due to the pedigree of its creators. It was written almost entirely by Doug Moench (creator of Moon Knight) for 100 issues and includes a 30-issue run of pencils by Mike Zeck (you know him as the artist of original Secret Wars). That places MoKF alongside some of the other most notable single-creator runs of the period (like Uncanny X-Men) when it comes to the strength and coherence of the ongoing plot.

In the same month they launched MoKF, Marvel also launched a magazine called The Deadly Hands of Kung Fu. DHoKF featured martial arts editorial content with B&W backups from a laundry-list of martial arts characters characters like Shang-Chi, Daughters of the Dragon, Iron Fist, and White Tiger (debut in #19).

Unlike Dracula, who has always been in the public domain in the US and who entered that status in the 1960s in Britain, Fu Manchu has remained the intellectual property of the Rohmer estate. While all Dracula stories are fair game to tell, print, and reprint, Fu Manchu requires a licensing agreement to use. At some point after the series ended in 1983, Marvel let their rights to the Fu Manchu universe lapse. While they still retained Shang Chi and brought him back in 1988, they could no longer name his villainous father in print. Further, Marvel could not reproduce or reprint those Fu Manchu stories in print and digital collections.

The announcement of this reprint implies some form of agreement as been reached with the Rohmer estate. Also, characters that belong to Marvel but originated in some of these series could very well be a part of their Netflix plan, since Iron Fist is tied closely to characters like Misty Knight and Colleen Wing. (Incidentally, this may also clear the way for some other core Marvel heroes issues to be reprinted due to Fu Manchu appearances. This is considered to be the hold-up in continuing the Marvel Team-Up Marvel Masterworks line.)

As to what’s going to be included in these four massive tomes, the sure bet is Marvel Special Edition #15-16, MoKF #17-125 and Annual 1, and the later-published anthology story from Marvel Comics Presents #1-8. Weighing in around 115 actual-length issues, that makes for four 28-issue volumes … that’s a bit under Marvel’s typical par, especially when it could easily fit into three volumes and knowing a fourth volume will be a hard sell. (For reference, Marvel has produced some omnis in the >45-issue range.)

What will merit stretching out to the fourth volume? It’s likely the companion book, Deadly Hands of Kung Fu. If Marvel only reprints the original stories, that would add #1-9, 11-18, 29, 31-33 and Special #1. That’s another 20+ issues. Yet, every issue – even the ones that order skips – included original editorial content, like Kung Fu how-tos.

While that material likely isn’t affected by any manner of licensing embargo, this is the best and most sellable chance to reproduce it. It also easily extends this material into the four-volume range, since each issue was 64 pages – that counts for about 70 more standard comics worth of content. Even if Marvel ditches some of the content, that places these books somewhere in the hefty 40ish issue range that would merit stretching out to four volumes.

Regardless of the contents of the collections, the announcement of this release is not only a major win for classic Marvel collections, it’s a terrific example of Marvel’s complex and sometimes thorny licensing relationships.

(Of course, the best example is the biggest licensing game of all – Star Wars! Marvel produced reams of original Star Wars stories in the late 70s and early 80s, but Dark Horse held the licensing rights up for over two decades until this year, when the Disney house brought them back into the fold. [Disney owns both Marvel and LucasFilm.])