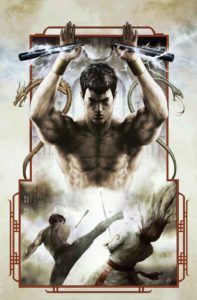 Frequently, my comic guides begin as one of two questions – either, “Where has this character appeared?” or “Can you buy collections of this character?”

That’s what makes my Shang Chi collecting guide and reading order a bit of an outlier. You see, I started working on it after picking up his first omnibus earlier this summer and loving the first few issues. There is a total of six scheduled volumes to cover both his long-running Master of Kung Fu (MoKF) series and its magazine companion, Deadly Hands of Kung Fu.

(If you don’t already know who Shang Chi is, I cover his history at length in the intro the guide).

With that beautiful volume one omnibus in my hands, I began sketching Shang Chi’s guide to see how those two series intertwined, and to understand how much Shang-Chi of the 80s and 90s would remain uncollected after the Omnibus line was completed.

I knew Shang Chi wasn’t used too widely after his series since I didn’t really remember him from my active collecting in year back in the day, but I was surprised to see just how sparse his appearances really were. Shang Chi appeared only in 50 issues between the end of MoKF in 1983 and his joining Heroes For Hire in 2006. And, not all of those appearances are significant!

While that’s kind of crummy for having reading material of a character you love, it’s a good thing when it comes to collected editions. Even if the Omnibuses stop right at the end of Master of Kung Fu and don’t touch things like his MCP run, by the time they’re all released at the end of 2017 we’ll have gone from less than 25% of all Shang-Chi featured appearances collected to over 85%!

Some fans think Marvel might stretch out the final MoKF omnibus volume to cover more than just MoKF to include the Marvel Comics Presents and Journey Into Mystery solo material. If they did, we’d be down to mostly just  appearance in Marvel Knights #1-15 being uncollected (which is a gap for all the street level folks – Marvel really needs to reprint that!).

I’ll continue to track that news as it breaks in the Shang Chi guide – so far only 4 of the 6 planned volumes have been announced.