You are here: Home / consume / food / Crushing On: Crispy Baked Falafel (in the style of Philly’s Mama’s Vegetarian) 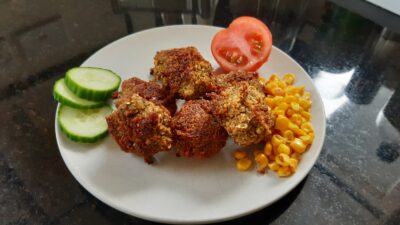 All I can promise is that they authentically taste like my memory of Mama’s.

First, food process the following to a fine, sandy texture:

I found the mix wasn’t wet enough without the bit of olive oil and I found no difference in adding or removing the cardamom. The taste wasn’t quite right for me until I added the brown sugar, which replaces some of the sweetness lost from not frying.

Refrigerate for 30 minutes. Then add:

If you don’t have those flours, substitution options include chickpea and oat.

Pour a generous puddle of olive oil onto your baking sheet. Gently form golf-ball sized scoops in one hand, pressing gently to pack them but not trying to force them into a solid patty. Place on the baking sheet with space equal to the size of one between each.

They should generally hold together, but will crumble if prodded. If the balls are taking too much pressure to form, continue adding sorghum flour by the tablespoon until they hold together with just one press.

Fan Bake at 375F / 190C for 14 minutes and then carefully flip. Bake an additional 8 minutes, and then a final 4 minutes with “Fan Grill” or “Broil” if you have that available.