I’m excited to announced the public release of my Ms. Marvel Guide – a complete collecting guide and reading order to Kamala Khan, now the star of her own Disney+ show! 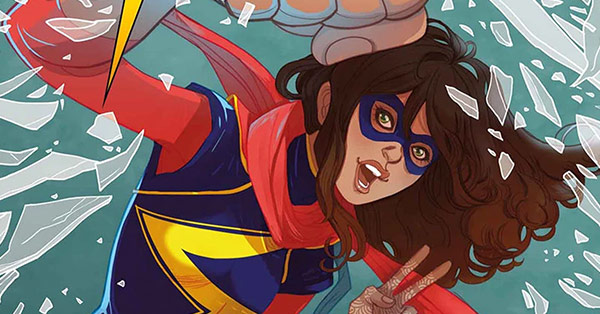 I originally launched my Ms. Marvel Guide to Patrons on 11 December, 2017 as part of several “Marvel Legacy” character spin-offs from existing guides.

At the time, we were only midway through G. Willow Wilson’s second volume of Ms. Marvel, launched in 2015 in the wake of Secret Wars. Since then, Kamala had another ongoing written by Saladin Ahmed, plus a mini-event centered entirely around her with Outlawed.

Now, the guide is now fully updated with all of Kamala Khan’s series, collections, and appearances announced through the present day – plus links to read digitally on Marvel Unlimited! That includes the new series of thick digest-sized paperbacks that collect the entire G. Willow Wilson run in five volumes.

Unlike many older Marvel heroes, Ms. Marvel’s series have existed entirely in what I refer to as “the trade era” – meaning that Marvel collected all of them into trade paperback collections after their release as individual issues.

Does that mean that every in-continuity Kamala Khan story is collected? Not quite. Last month, Kamala garnered her own Marvel Unlimited Infinite Comic. It was written by the author of her last mini-series, Samira Ahmed, so it has a certain ring of authenticity to it that many digital one-shots don’t. However, this new line of Infinite Comics launched in September 2021, and so far none of them have been collected physically. (You also cannot read them on a web browser; they are for app-users only.)

That still leaves you with over 88 issues of Kamala-starring titles to read, plus all of her appearances in All-New All-Different Avengers and Champions.

What are you waiting for? Dig into reading Kamala Khan’s adventures in the Marvel Universe today with my Ms. Marvel Guide.