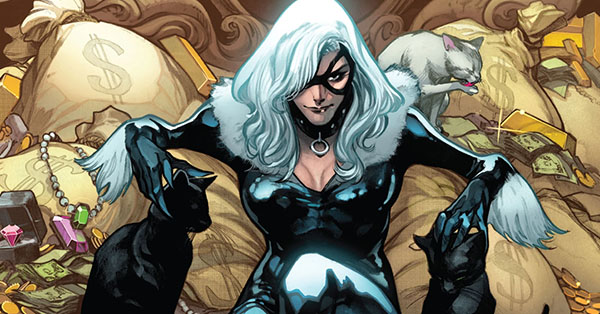 Curiously, she has no interest at all in who Spider-Man was under the mask. In fact, when Peter first reveals his apartment and identity in Peter Parker, The Spectacular Spider-Man (1976) #74, Felicia reacts with a combination of distaste and horror. To her, the fantastical life of a hero or vigilante is a necessary escape from the dull routine of civilian existence. To think about the regular person beneath the spider-webbed mask ruined her fantasy.

In retrospect, Black Cat’s obsessive devotion to Spider-Man reads in a creepier way than it was intended at the time. Today, her earliest appearances can come off as pure adolescent male wish fulfillment – a walking sex doll who was would forgive Spider-Man of any sin other than removing his mask. 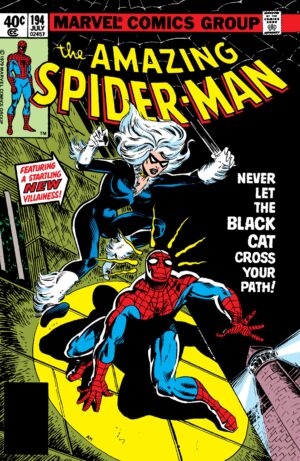 While that was certainly a component of how she was written, in the context of the the time she was a character who pushed boundaries. Felicia was one of the only costumed women in Peter’s cast, she was bold in both battle and relationships, she seemed immune to the typical romantic soap opera plots foisted on a character like Mary Jane, and she was always willing to come to Peter’s rescue even if she was hopelessly outmatched.

That initial 1983-87 run of Black Cat as a supporting character in Peter Parker, The Spectacular Spider-Man (1976) are all great comics. I was repeatedly surprised by how engaging they were – I would crack them just to summarize Felicia’s panels, and wound up reading entire issues! It helps that her time as his supporting character intersects with his return from Secret Wars and the classic “Alien Suit Saga.”

Given Black Cat’s role in Spider-Man’s life, it’s no surprise that she had to be hastily written out when Peter decided to go steady with and ultimately propose to Mary Jane. At the time it was seen as a desirable goal to move Peter through the stages of life, from high school to college to post-grade job-seeker to married man, and Black Cat didn’t fit well into that progression.

This yielded a few years of Black Cat being a jealous, jilted ex-lover in the early 90s during the height of Todd McFarlane and the introduction of Venom. However, what emerged from that period was far more interesting. Felicia Hardy became one of Spider-Man’s precious few super-powered buddies outside of Human Torch. She was a character who knew everything about him but had no connection to his personal life aside from having met Mary Jane. In fact, her once-adversarial relationship with MJ blossomed into a begrudging respect as the two of them often teamed up to ensure Peter’s safety.

That status quo lasted for over a decade – through a solo mini-series that went nowhere, Maximum Carnage, The Clone Saga, and Felicia establishing her own security agency seen only in Annual back-up stories. By the early 00s, her guest appearances had developed to be consistently solid, if predictable.

That all changed in the wake of Civil War and “One More Day,” which first revealed Peter Parker’s identity to the world and then made everyone forget it. Both developments fundamentally changed Felicia Hardy’s place in the world of Spider-Man. 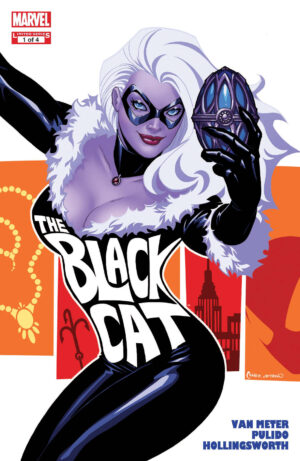 First, the Civil War development opened her up to appearing away from Spider-Man for the first time ever. She co-started with Wolverine in Claws (2006), joined Misty Knight’s Heroes For Hire, and was in Marvel Divas with gal-pals Monica Rambeau, Patsy Walker, and Firestar.

Just as “One More Day” reset Peter’s marriage to MJ, when Black Cat returned in Amazing Spider-Man (1963) #606 it also meant Felicia couldn’t recall the fullness of her role as Peter Parker’s defender. That brought back their sexual tension with a much more prurient, mature-readers vibe, but it also shifted the power dynamics in their relationship. Now, Spider-Man was the one who felt flustered by Black Cat! Felicia Hardy was no longer a naive young girl in hot pursuit of Spider-Man. Finally, she was the masterful former thief with full agency she had always been implied to be.

As Dan Slott’s eight-year epic of writing Peter Parker pressed on (and rolled through Superior Spider-Man), it became clear that Felicia Hardy’s role as an occasional love interest was no longer all that useful. Instead, the Marvel Now period from 2013-2015 recast her as a criminal mastermind who was slowly-but-surely increasing her hold on New York City right under Kingpin’s nose. That made Black Cat the featured villain for both runs of Robbie Thompson’s Silk in 2015 and 2016, follow by her going full-evil across many guest-starring spots in All-New All-Different Marvel in 2016-2017.

It was Dan Slott who put an end to that status quo in his 2018 “Venom, Inc.” crossover mini-event, ending Felicia’s criminal empire and resetting her back to being a physically and morally flexible thief. While Nick Spencer featured her in that capacity early in his run on Amazing Spider-Man (2018), it was Jed MacKay who took that status quo and ran with it in Felicia’s first ongoing title – Black Cat (2019) and its relaunch into Black Cat (2021) and Iron Cat (2022).

Across 30 issues, MacKay gave Felicia the most on-panel exposure she has had in her over 40 years in comic. He developed her backstory, her supporting cast, and her ambitions. His depiction of her plots-on-plots-on-plots coming to fruition made her feel like a combination of both Catwoman and Batman. Marvel doesn’t have another specific heist-pulling hero other than Gambit, and MacKay’s run scratched that itch perfectly while exponentially expanding Felicia Hardy’s canon of memorable stories.

CK Patrons can read all of that and more in my definitive Guide to Black Cat, which contains every Felicia Hardy appearance from her debut to present day in reading order, including her greatest hits and suggestions on where to start. Patron’s Choice guides remain exclusive to CK’s Patreon community for an extra-long time, since they’re guides that were not already on my map – you can gain access for as little as $1/month.