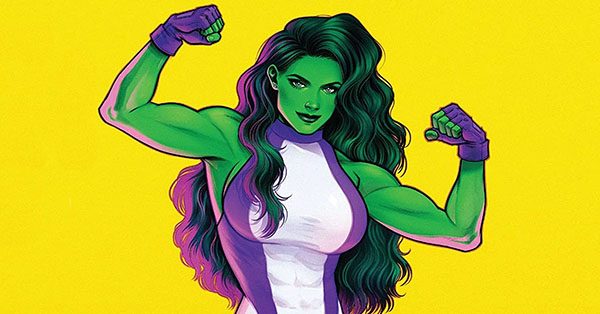 She-Hulk’s progression has been more about evolving with the idea of what being a “powerful woman” means to the broader pop culture in any given publishing era. 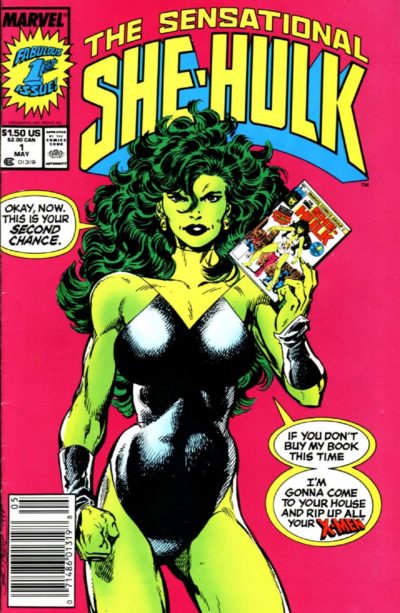 She began her life as a straight-forward female copy of the Hulk, the last character Stan Lee launched in the Bronze Age purely to retain Marvel’s copyright on the gender-swapped version of Hulk. While it sounds like a distinctly utilitarian approach to creativity, it also speaks to what a “strong female character” was at the time – essentially, just a version of a strong male character, but with breasts.

In the 80s, She-Hulk became a staple of the Avengers and the Fantastic Four, in part under the pen of John Byrne. He extended that run by launching her 1989 solo series. Byrne gave her the power of being able to comment on her own situation by breaking the fourth wall to address the readers. This extremely meta power let her make light of all of the sexy situations she was thrust into for marketing purposes. It’s a self-awareness that was mirrored many acerbic female comedy leads of the day on TV and in movies.

(Unsurprisingly, She-Hulk disappeared in the back half of the 90s, where almost every comic women suddenly had her proportions if not her strength. Sometimes the greatest power is to make yourself scarce to let your imitators speak for themselves.)

Even if Byrne was the creator to create an indelible personality for Jennifer Walters, the 00s were her decade to cement her place closer to the center of the Marvel Universe.

In a pair of series from Dan Slott and Peter David, She-Hulk changed again – to be more of a dauntless professional who also happened to be a rage-filled badass who could launch you into space with the power of her punch. It also found her drawn into Bruce Banner’s continuity as Hulk for the first time ever, playing a pragmatic and often exasperated perspective on his world-breaking endeavors.

In the 10s, we saw yet another shade of She-Hulk. First, in 2014 she was written by comics superstar and actual-life lawyer Charles Soule, who gave us our smallest and most-grounded take on her law practice ever in a way that felt closer to TV’s Shondaverse than the MCU at the time. She reflected our ability to see power in women working in the same jobs as men, but outshining their male counterparts exactly because they aren’t the same as them at all.

Finally, in 2017 She-Hulk was written on an ongoing basis by a woman for the first time. Eisner Award winner Mariko Tamaki. Tamaki penned a decompressed 2017 run all about the quality of grief, rage, and fear. She humanized She-Hulk, making it clear that Jennifer Walters deals with all the same emotions as any women – she just turns into a monster when she has gone beyond her limit.

Now, in the 20s, we have a new She-Hulk series launched by Rainbow Rowell, who just completed a flawless run on Marvel’s teen Runaways. I can’t wait to read how Rowell alters Jen’s powerful persona for a new decade!

Ready to start reading? Visit my Guide to She-Hulk and jump into the world of Jennifer Walters in any decade you choose.