I can both love and loathe celebrity auto-biographies, but I definitely loved Caught in the Act.

I can love them because they are a glimpse at the inner life of someone whose art I’ve spent years – sometimes decades! – consuming. They can add fresh context to work that I already appreciate.

I can loathe them because they are often more artifice than reality. Prose is just another method of performance. Sometimes you wind up with a few shocking revelations or debaucherous anecdotes, but that doesn’t meant you’ve gotten any closer to truly knowing the author. 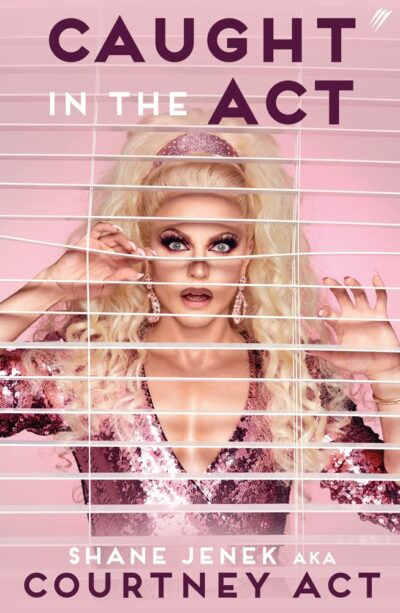 No, I’m not talking obliquely about Prince Harry’s new bestseller, Spare. The first physical, non-graphic-novel book I read this year is Caught in the Act, a memoir in three parts by Courtney Act – contestant on Australian Idol Season 1, finalist on RuPaul’s Drag Race Season 6, winner of Britain’s Celebrity Big Brother Series 21, and finalist twice-over on Australia’s Dancing With The Stars.

That’s quite a resume. I first glimpsed Courtney in her “Meet The Queens” interview for Drag Race in 2014 and I was instantly transfixed. I had seen drag queens before and I understood they were often men dressed in exaggerated versions of feminity, but Courtney looked more like a glamorous pop star.

Little did I know how right I was, but also how much that dichotomy often plagued Courtney. (She is credited both as Courtney Act and as Shane Jenek on the book’s cover and is comfortable with either he/him or she/her pronouns.)

The three acts of Caught in the Act are Courtney’s childhood in suburban Australia, her coming out of the closet and into the Sydney drag scene, and her international stardom (and ensuing relationships). I found each portion fascinating, but I think the one that affected me the most (and most unexpectedly) was the portion of the book about Courtney’s childhood.

Courtney and I virtually the same age, separated by only a few months. Even though we grew up across the globe from each other in different cultures, we were exposed to much of the same pop culture. Courtney talks about Madonna and the X-Men, which is shockingly familiar to me. She also talks about years of suffering in silent confusion as she tried to work out why some things in life were “boy things” and some were “girl things.” That felt familiar too.

Early in the book, she says:

I wish there’d been honest and frank conversations going on as well as visible queer people in the world and on TV. I can’t begin to explain what a significant difference that would have made, or what a difference increased visibility since then has made for queer kids today. Growing up in a world of queer invisibility was so isolating. The strange part is I didn’t know I was isolated – I didn’t know I was learning shame, or to hid who I was for safety: it came instinctively for survival. Every now and again I wonder if I’ve retrofitted shame where it didn’t exist. Then I remember: shame is a deposit made for a future debt, and it accumulates over time with compound interest.

That idea that we can’t tell if our adult shame is the same as our childhood shame bowled me over. I stopped and stared in shock at that page for a long while. I’ve never read someone so clearly explaining why the process of coming out can be so long and slow, even when surrounded by an entirely supportive environment. Courtney captures the emotions of childhood, but adds the the adult lens of someone who is on the forefront of conversations about gender all around the world.

What shocked me most about Caught in the Act wasn’t Courtney’s backwards tumble into fame, her drug use, or her sexual encounters. No, the most-revealing aspect of this book is just how long it took her to come to terms with her own gender identity.

Courtney struggled on several occasions with the idea that she was a trans woman. While enjoying her Drag Race success she felt inadequate and unworthy of attraction out of drag as a somewhat femme gay man. In fact, meeting Cher’s son Chaz Bono on Drag Race and becoming friends with him after the show was a huge part of Courtney’s understanding and acceptance of being gender fluid!

It’s wild to me to think that the beautiful, articulate, authentic person who drew me into the Drag Race fandom in 2014 was experiencing so much inner turmoil about her own identity! I was in awe of Courtney when I saw her perform in a small, sweaty club in Philly that year. Meanwhile, she was worried that audiences hated her for being too perfect! Little did I know everything that was going on backstage. 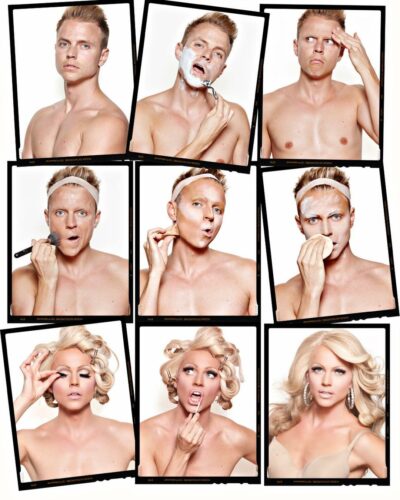 I was expecting to read a book about a meteoric rise to stardom. That wasn’t Courtney’s story. She found success in fits and starts, even failing in the wake of her massive exposure on Drag Race. There’s a real sense that despite being known to millions of people around the world that Courtney is just now feeling true success as an activist and I got the sense that authoring this book is a big part of that.

Courtney’s vulnerability stuck out for me throughout the book. She is open about her use of party drugs in the early 2000s, including a ground, unglamorous description of how they affected her personality. She is plain about the financial pitfalls of being a reality show pop star with one non-hit single. She discusses how she was on the verge of a nervous breakdown by the end of Drag Race, barely able to walk out of the finale under her own power.

You can tell when she’s glossing over things in a practiced performance. She elides much of the inner workings of emerging from her post-Idol slump, despite having launched one of the most-successful wig businesses in the world in that period. She never digs all that deeply into recounting her own performances. When it comes to Drag Race and Celebrity Big Brother, she keeps the focus on things we know or could’ve surmised – RuPaul’s demeanor on set or Ann Widdecombe’s conservatism. She dishes on some steamy encounters with people of all genders, and while some of it is X-rated it’s never salacious. It’s always as much about emotions than physicality.

Whether we’re getting vulnerability or performance, Caught in the Act can be both conversational and surprisingly precise. She remembers all of her show choir bus trips and what the kids sang to each other at their afterparties. Her frank portrayal of coming out and doing drag for the first time is practically a minute-by-minute accounting. She recalls exactly when her alarm clock was set after a one-night-stand. And, she often breaks up her biography with “Courtney Fact” pages explaining sex, gender, and terms like “passing.”

I devoured this book in just two sittings, which I’m sure I’d do with any bio from one of my favorite drag queens. I was also deeply moved by it. Even though we’ve lived vastly different lives, I found that I resonated with so many of Courtney’s experiences. Another early passage of the book that stuck with me was Courtney describing her inherent weirdness as a kid in school:

Being different wasn’t a real choice, though; it was irrepressible. The things I loved were always different – I don’t know if I loved them because they were different or if I was different because I loved them.

That’s a feeling I struggled with as a child and I’m still struggling with as recently as blog posts I wrote last week!

I think Caught in the Act is an autobiography that isn’t just for Drag Race fans or reality TV junkies. I think anyone who has ever questioned society’s unspoken rules around sex, gender, and sexuality will find insight and compassion in Courtney’s writing. Ultimately, the moral of her story is that true success is being happy with who you are – and that’s a message that can resonate with anyone.