Everyone is a geek about something.

People geek about their children, cars, sports, and lawns. There are entire big box chain stores devoted to geekery in home renovation, pet care, and home electronics. You’d have to be a pretty unenthusiastic human being to live an entirely geek-free life?

So why don’t we call everyone “geek”? Or, better, why doesn’t everyone self-identify as one? Maybe because many of their geek-out pastimes are popular. They are acknowledged, mainstream pursuits. They have infrastructure and the aforementioned superstores to support them in their geekery.

I posit that it’s specificity that makes the true geek. Their great love and obsession isn’t easy to pursue. While their neighbor enjoys lawn care, they are obsessed with a specific kind of grass. While their husband loves movies, they love sub-titled action movies.

Or not. It’s not like the geek label really gets us anywhere in life, aside from finding other geeks as friends and scoring occasional “geek cred” when one of our favorite things hits the mainstream. Yet, there is something compelling about it. I proudly label myself a geek about blogging, social media, music, X-Men, and a host of other topics where I have made it a point to be the most obsessed one in any given room.

I have yet to receive my laminated geek card for all of my geekery. However, I am Philadelphia’s Geek of the Week, as determined by Geekadelphia – who are really the geeks of geekery in Philly.

Things my network of friends and blogs shared that made me think twice, at least. 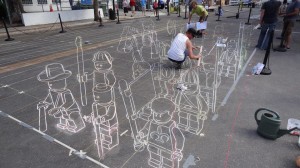 Shared by James Gunn on FB.

(via @brimil. See the end of the post for the finished product. I think this is cooler, personally.) 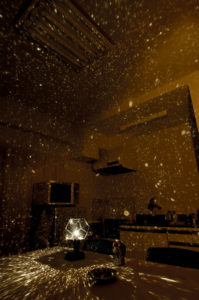 I am totally buying this star projector as Arcati Crisis’s first official stage lighting equipment. Bonus points if I can figure out how to turn it on from my pedal board (via NotCot).

Seth Godin posted the only job interview questions that matter. Seth’s is a “every post is amazing” sort of blog.

An efficient post on how beginners and experts are the same. (via Karl Martino)

A solid and realistic plan for an indie, DIY band to begin promoting themselves via social media. A lot of familiar conversations and steps portrayed here. From How to Run a Band,  fantastic blog.

A brilliant kerning game made its way around our office recently; Kottke posted its sequel – a letter shaping game that simulates typed design.  Also via Kottke, we totally had this 1970s Chevy Nova  when I was a kid. Maybe this is why I am so obsessed with speedometers. 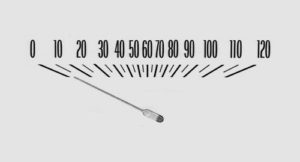 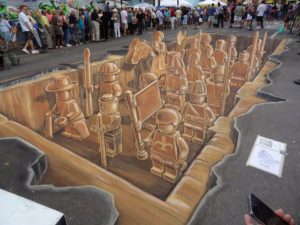 Shared by the artist, Leon Keer, I think it was cooler when they were invisible soldiers.

I thought The three biggest myths about women in tech was an interesting read, partially from a feminist perspective, but also because I have been alerted as recently as today that I rely too much on non-existent meritocracies to promote me and my creative work. (via Ma.tt)

The handy “Is It Old?” website helps you keep up a supply of freshly caught links by sussing out the dusty ones. I plugged in this week’s popular Drinkify.org and it informed me: “Reall old. How did you miss this? DO NOT SEND. It has been tweeted 1981 times already, and the first time was 4 days ago.” (Via Meg’s Tumblr)

A few weeks ago I was cruising my Facebook feed and I noticed a link to a blog post entitled, “#32: People who confuse karaoke night with American Idol auditions.”

Being that person, naturally I clicked through.

Unfortunately, the post I discovered was not on a blog titled, “Stuff That Makes People Awesome.” Nay. It was called “You Know What I Hate?”

I bristled, awaiting the salvo against my karaoke perfectionism. You know what happened instead? I laughed. I laughed because the post was right-on, and it wasn’t only about me wanting to sing one song well at karaoke – it was about people who consider themselves performers due to their karaoke prowess.

Also, it was really fucking funny.

I kept reading. The author doesn’t just hate annoying people (like #15: People who are good at running) – her biggest category is actually moments of intense expectancy violation; times where she isn’t sure why something is happening or how she should react.

Her writing swerves from confrontational second person to babbling interior monologue, all delivered as a stream-of-consciousness with a delightful, seemingly-compulsive frankness. Even when the thing she hates is something I endorse (#19: Expensive first dates, for example), her argument is still so salient and caustic that I can’t help but agree a little bit while giggling. I found myself heading back to Thing #1 so I could read her entire screed in one go.

Last weekend I lucked upon the opportunity to meet the reclusive blogger – and it took some digging to get her to admit her authorship. Once I had dragged a confirmation out of her and confessed my major crush, she asked to me deliver a dramatic reading to her small crowd of friends of a draft in-progress with the title “#34: Not knowing what to do when you wake up in someone else’s bed.”

In my shameless attempt to get you to read You Know What I Hate?, please allow me to present a recording of my reading of said post.(NSFW content, but language is clean)

I’ll admit it – I like my pop news. I want my Gaga fix, I love Kelly Clarkson, I snark on American Idol, and I should probably be able to mumble something about Beyoncé to our interns to prove I am not a total oldster.

Yet, the arena of pop news is a bleak place filled with fawning and no-calorie celebrity stories about every popstar’s walk down the street or who they were rubbing elbows with out at a club.

Enter Popdust, launched earlier this year. I first caught wind of it from Twitter album reviewer @1000TimesYes, who is one of my fav Twitter users and one of Popdust’s snarkiest writers.

Popdust obsesses over Gaga, Beyoncé, Glee, Bieber, American Idol, and all other things Top 40 – but it keeps them at arm’s length, remembering that beneath the popularity there is actual artistry to be discussed and dissected. You can almost feel the eyerolls in some of their coverage (especially re: Glee), and they often go meta, talking about why they’re even bothering to talk about the things they’re talking about.

Case and point: their Gaga coverage. When Born This Way dropped Popdust covered it wall-to-wall for a week, running substantive track-by-track reviews, that took Gaga to task for her clunkers. They also landed an exclusive phoner with Mother Monster herself last week – not something most pop blog outlets could say (even if they’re attached to a major media network or print magazine). In the interview they called “Edge of Glory,” her “third best single,” and actually got Gaga herself to comment on what her best songs have been. Amazing!

After the big get I read up on Popdust’s backstory. It’s not as if it was launched by 1000x out of his parent’s garage. It has a major media pedigree, with founders who were EIC’s at Billboard and CEO’s of their own startups that sold for north of $300 million. They completed a $1mill A-Round of financing – one million, for a pop blog! Even if we include all the crazy music and comic books I buy every year as part of CK’s operating budget it is significantly less than 1% of that.

You know what? I don’t care if it takes a million dollars and rich dudes with business savvy to put together a website that takes pop seriously while keeping a tongue firmly planted in cheek. Popdust is my favorite pop news outlet of 2011.

I performed with Filmstar for the first time on Saturday, but you have to wait a day or two to hear about the results and if I’m still feeling conflicted about playing with the band.

1. Philly (and the internet at large) got up in arms last week about a so-called “Philly Blogger Tax,” which was really just the city’s business privilege license being applied to Bloggers. My virtual friend JoeBeta sussed out a sensible explanation and critique of the policy, from Technically Philly co-founder Sean Blanda.

It’s certainly a horrible waste of resources to pursue blogs with revenue in the hundreds when some companies and individuals owe the city millions in back taxes, forcing the city to do things like offer a tax amnesty to the dead beats.

2. Rocking local blog Phrequency had a flash concert for TJ Kong on the freaking Broad Street Subway. I love TJ Kong and my old promo shots were from the Walnut Street station, so in my opinion this is approximately the best thing ever.

Do not hold your breath waiting for me to do one on the El, though.

3. A Vancouver realtor’s Facebok page gained over 4,000 fans in 12 days. Crazy pyramid scheme for iPads? Nope – good old fashioned content that people give a shit about. (via @morganb.)

Imagesoak is a fantastic application for finding things to read and look at based on the interesting photos and images that accompany them. Nevermind what I just said, just go there.

5. Matthew Leone, bass player for the Chicago based band Madina Lake, sustained life-threatening injuries while trying to defend a stranger from brutal domestic abuse. Sweet Relief, a fund that supports musicians in times of illness, is raising funds to pay for his treatment and rehabilitation. Matthew’s band member and brother has been blogging through the ordeal.

6. Leslie Hunt was one of my favorite recent American Idol Semi-Finalists – she had a real identity and real taste in music, but was quickly kicked to the curb for her quirk. Mpomy.com blogs a video from her new project, District 97

7. Amanda Palmer’s life is so serendipitous. On break from her hectic schedule, she sees a random trio of teens whose photo she feels compelled to take. Almost after she’s gone, one realizes who she is, and catches her to tell her that he’s a big fan. One thing leads to another, and suddenly he’s playing a concert to thousands of internet viewers from her apartment.

8. Amanda’s fiancé is super-famous comic, fiction, and film writer Neil Gaiman. Neil has been in a legal struggle with Todd McFarlane since 2002 regarding unpayed royalties on creator-owned characters he developed for McFarlane’s Spawn. Neil blogs part of the judge’s new decision, which contains delicious text like:

Much as defendant tries to distinguish the two knight Hellspawn, he never explains why, of all the universe of possible Hellspawn incarnations, he introduced two knights from the same century. Not only does this break the Hellspawn “rule” that Malebolgia never returns a Hellspawns to Earth more than once every 400 years (or possibly every 100 years, as suggested in Spawn, No. 9, exh. #1, at 4)…

I hope your Monday is going well. More news (and video) on my weekend as a Filmstar coming up!