I’ve been thinking about groceries, scale, and the American way.

Last night, while our daughters napped under J’s watch, Lindsay and I absconded to Wegmans for a quick shopping trip slash Pokémon catching session. Yes, you read that right – we had an hour to ourselves and we went grocery shopping for amusement. To be fair, Wegmans is definitely like an amusement park for hungry adults recovering from five hours swimming in a lake with two boisterous young ladies. 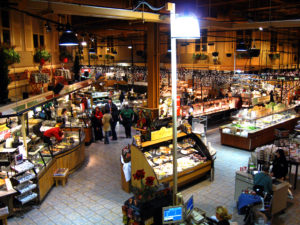 You could fit an entire French supermarket into this Wegman’s photo. Photo by Flickr User Seuss. 2008, some rights reserved.

I know I’m a little late to coming around to Wegmans – heck, Lindsay grew up shopping at one! Even as I marveled at how Wegmans has every possibly thing (Six different kinds of raw shrimp to choose from! Three different kinds of Tahini! Every single organic vegetable! Liquor and Beer!), I also reflected on the very middle/upper-class American condition of being excited to visit a grocery store that’s as much about leisure as it is about subsistence.

My grocery situation as a small child was all about subsistence. For deli and packs of cigarettes, we had a tiny Vietnamese bodega on our corner, and for other groceries a smallish Stop and Save and Shop or Something on the next block that accepted our food stamps. I remember being mystified by the cheap brands of frozen foods like waffles or steaks that I had never heard of before – because they didn’t advertise on TV.

When an Acme was installed on 80th street it was big news, and the long aisles full of expanded cereal choices and real meat counter seemed like luxuries – likely combined with the fact that we had graduated from welfare with my mom getting her degree and could more readily afford such things.

In college we alternated between a newly-opened Fresh Grocer, which was like a slightly watered-down Whole Foods, and a local Thriftway that Lindsay, Erika and I re-christened “Theftway” for its sometimes-shady customers and peculiar aisle arrangement. Theftway was great for getting cheap name brands, but for anything special, fresh, or healthy we’d take the four block walk to Fresh Grocer.

On our honeymoon the tiny Paris apartment E and I were renting had an impossibly small miniature refrigerator, which meant we needed to restock our food options every other day. That wasn’t so unusual, and the local grocery store reinforced that – it was no bigger than a suburban Wawa and didn’t contain a single super-sized portion of anything. Juices topped out in half gallons, and paper towels came in a max three-rolls-per-pack. When it came to wide varieties, the selection focused on fresh things like cheeses, breads, and juices rather than 100 different kinds of cereal.

We loved it. Bigger doesn’t always have to be better.

Now my local haunt is an impossibly large Giant, which has nearly put our local Acme out of business – it looks dismal by comparison. Not coincidentally, it’s now completely devoid of the upper-middle-class suburban shoppers that used to clog its aisles. After all, Giant has not one but two aisles of healthy and gluten-free foods!

That’s not meant as a knock on GF stuff, since it’s a requirement in our household – more an acknowledgement of the kind of choices that become important to you when you’re not looking for the foods that your WIC check will cover. Recently EV and I had a long wait behind a couple who were trying to figure out what they could cover with WIC checks and what they needed to pay in cash.

After they were finished, the cashier fixed me with a grimace and apologized for the wait. I responded, “No worries, I remember what that was like.”

She gave me a puzzled look in return and started ringing my groceries.

There’s a very interesting site that allows you to calculate your ecological footprint. While the information on how much of the Earth we suck up is rather sobering, i found out i only equal about .5 of a normal ecology hogging American! Go me!!! Now, if we eliminated half the world’s population and the rest of them only took up as much space as i do, we’d be on the right track.